Accept criticism as argument, not as intolerance: Prez at IIM-C

President Pranab Mukherjee on Saturday put a premium on debate and discussions, exhorting the student community to be argumentative, but not intolerant. 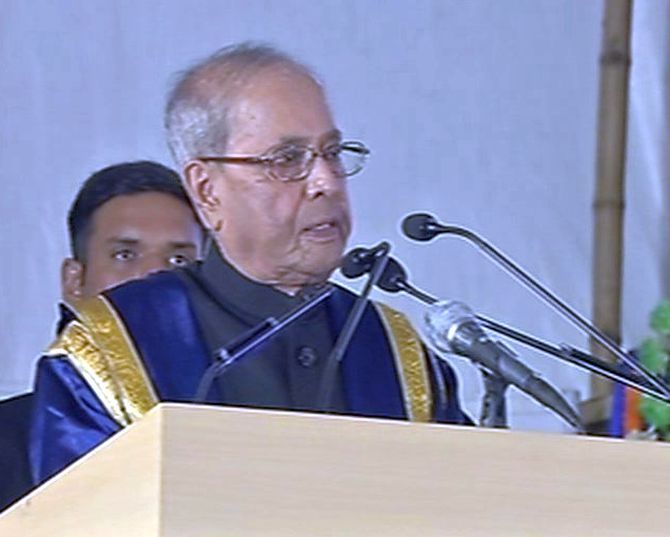 Referring to first Prime Minister Jawaharlal Nehru as the one who built modern India, Mukherjee said that he had helped build an atmosphere of free debate and discussions and not conflict and confrontation.

"As Amartya Sen had said, an Indian can be argumentative, but not intolerant," Mukherjee said at the 52nd Annual Convocation of IIM Calcutta.

"India is a land of tolerance, land of Buddha, land of Chaitanya, but not land of intolerance," he said further, adding that "please excuse me if I have hurt any sentiment by saying so".

The President also made the point that management education, in order to be world class, needs to be able to embrace contrasting pedagogical approaches, multi-disciplinary allegiances, and contemporary skills and capabilities.

"A plural mode of thought leadership in education enables the simultaneous pursuit of multiple paths to excellence," Mukherjee stressed.

Such plurality is evident in the priorities and practices of IIM-C, Mukherjee pointed out, saying the institute has shown the way and it will assume leadership in innovative refinements in pedagogy.

"Let hundreds of ideas blossom in universities and let there be debate, not confrontation," Mukherjee went on to say. "Accept criticism as argument and not as intolerance."

"Management education like education in other professional streams cannot be divorced from the socio-economic reality facing the nation," Mukherjee said. "Skilled and socially sensitive professionals will not only build Indian leadership in global business and industry, but carry on their shoulders the developmental priorities of the nation."

He quoted Mahatma Gandhi as saying, "Education in a country has got to be demonstrably in promotion of the progress of the country."

The President emphasised that the academic environment should be free from physical and mental violence, particularly in the seats of higher learning.

He also touched on flowing of ideas from various parts of the world, saying "our ancient universities used to attract teachers, researchers and scholars from outside".

"This had not led to blowing off of the foot from the ground. This is possible only if the foot is firmly placed on the ground," he noted.

He also made a mention of IIM Calcutta's "rare capacity" to manage alliances with other educational institutions in the pursuit of complex goals.