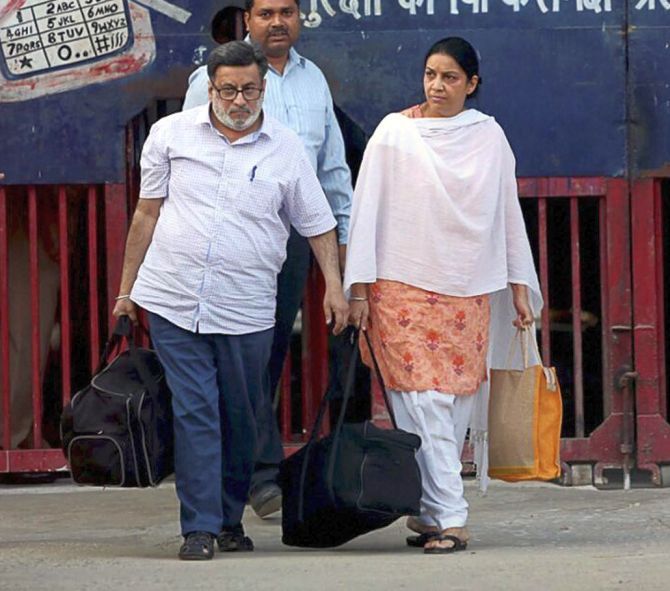 Dentist couple Nupur and Rajesh Talwar walked out of Dasna Jail after four years of prison life on Monday, four days after being acquitted in the murder case of their daughter Aarushi and domestic help Hemraj.

The Talwars, freed by the Allahabad high court, looked tearful as they stepped out of the prison gates at 5 pm and into the car that was waiting to take them to Nupur Talwar's parents' flat in Noida.

They were escorted by Rajesh Talwar's brother, Dinesh Talwar, and their lawyer, Tanveer Ahmed Mir.

The case, avidly followed by the media and the public, comes to a closure after the high court's acquittal on October 12 and the couple's journey home.

The two had been convicted for the murders in 2013 by a lower court and sent to the Ghaziabad jail.

"The pain of losing Aarushi can never go away and the grief over her loss, which was somewhere bottled up, will now come to the fore. They are not in a position to talk," Dinesh Talwar later told reporters.

Before their release from jail, the couple met other prisoners, officials said. The Talwars also assured the jail authorities that they would visit the prison once a fortnight to conduct dental check-ups on prisoners.

There was mayhem on the road outside the jail with mediapersons scrambling for bites and images as the Talwars walked out of the prison.

After their release, the police escorted the couple to Noida's Jalvayu Vihar. It was in another flat in the same housing complex that Aarushi and Hemraj were killed on May 16, 2008.

"A conspiracy had been hatched to implicate our clients," lawyer Mir said after their release, which came two days ahead of Diwali.

He added that the prosecution had presented wrong evidence and requested the media to "let them live in peace".

WATCH: Rajesh and Nupur Talwar released from the jail

Earlier in the day, a surety bond of Rs 1 lakh each for the couple was filed by family members and friends in the court of special CBI judge Rajesh Choudhary.

While addressing the media in Noida, Dinesh Talwar hinted at media reports that linked Aarushi with Hemraj, and said they were not "guilty".

"At this point, we can say none of them was guilty," he added.

In the last four years, the family had controlled their emotions because they had to fight the battle in the "quest for truth", he said.

"We forgot everything else and our motive was to clear Aarushi's name. The day Rajesh was convicted, he told me, 'I will fight this battle for Aarushi till my last breath'. He did not say that he wanted to come out of jail. He wanted to clear his daughter's name," Dinesh Talwar said.

Dinesh Talwar said the pain of losing Aarushi would never go, and urged the media to give the family some time to get back to a normal life.