Aarushi murder: Nupur Talwar to remain in jail till Sep 17

Source: PTI
August 13, 2012 17:47 IST
Dentist Nupur Talwar will have to remain in jail at least for another month in the twin murder case of her daughter Aarushi and domestic help Hemraj with the Supreme Court on Monday deferring till September 17 hearing on her bail plea.

A bench of justices A K Patnaik and J S Khehar, deferred the hearing after the Central Bureau of Investigation submitted that it would conclude examining of 13 crucial witnesses by mid September.

Pleading for bail, the dentist's lawyer C S Vishwanathan assured the court that Nupur would not try to influence the witnesses and court can put any condition for granting her bail.

But the agency strongly opposed the bail plea saying that she might try to influence key witnesses during her trial and she should not be released during the examination of 13 crucial witnesses, which is going on in lower court.

Additional Solicitor General Siddharth Luthra, appearing for the CBI, assured the court that the agency would confine its examination to 13 crucial witnesses and not all the 140 witnesses. It said that the examination of the witnesses would be finished by mid September and also said that the trial in the case would be concluded by the end of this year.

The court, after hearing both sides, adjourned the hearing and listed the case for September 17.

Nupur, who has been in jail since her surrender before the Ghaziabad court on April 30, had moved the apex court challenging the Allahabad high court's order, which had on May 31 dismissed her plea for bail.

The trial court had on May 2 rejected Nupur's bail plea. She had surrendered before the trial court following a stern direction from the Supreme Court, which had also refused to stay the non-bailable warrant issued against her by the lower court as she failed to appear before it despite its summons to her.

Fourteen-year-old Aarushi was found dead in her bedroom at the Talwar's residence in Jalvayu Vihar, Noida, on the intervening night of May 16-17, 2008. The body of Hemraj was found on May 17 on the terrace.

Holding that there is prima-facie evidence against the couple, the Ghaziabad court had ordered framing of charges of murder and destruction of evidence against Nupur and her dentist-husband Rajesh.

The apex court had earlier refused to give her any relief and allowed her trial in the murder case along with Rajesh. It had also dismissed her review petition challenging summons issued by a special CBI court in the case and warned her of "exemplary costs" for any frivolous litigation. 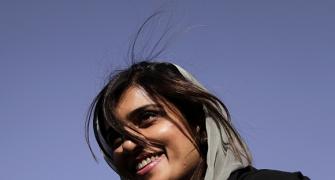 Nupur could influence witness, no bail for her: CBI to SC