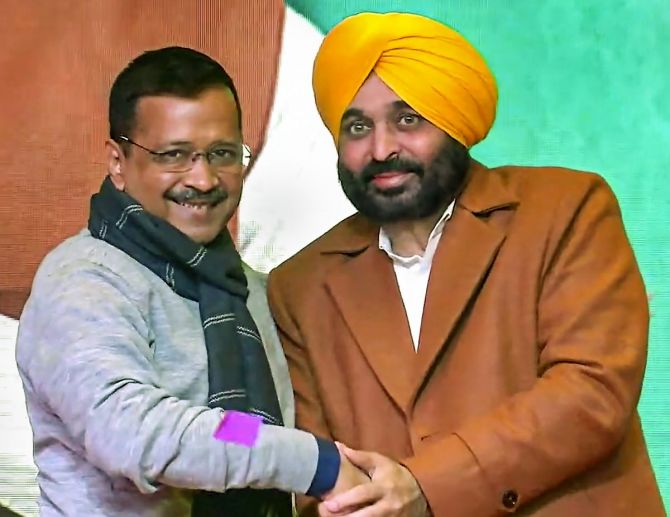 The Sangrur MP assured people that he will work for their welfare and put the state back on its feet again if the AAP is voted to power.

Polling for Punjab's 117 assembly seats is scheduled to be held on February 20 and the counting of votes will be taken up on March 10.

The wait for the AAP's declaration of its chief ministerial face got over on Tuesday when its national convenor Arvind Kejriwal announced the results of the party's janta chunegi apna CM drive, in which it had asked the people of Punjab who should be its choice for the top post.

The AAP had launched a mobile number on January 13, on which people were asked to give their opinion till 5 pm on January 17.

The party received over 21.59 lakh responses under the campaign, Kejriwal, who arrived from Delhi to make the announcement, said.

A comedian-turned-politician, Mann (48) is a two-time MP from Sangrur and is the AAP's Punjab unit chief.

"Many people gave my name too. I had earlier said that I am not in the race and we declared these votes as invalid. Of the remaining votes, 93.3 per cent were in Mann's favour," he said.

Kejriwal had recently said his preference for the top post was also Mann.

On the second spot was Punjab Congress chief Navjot Singh Sidhu, who got 3.6 per cent votes, the Delhi chief minister added.

"Bhagwant Mann is officially declared as the AAP's chief ministerial face," he said.

Celebrations erupted among the party workers present at the venue after the announcement.

Kejriwal hugged Mann and turned emotional. Mann's mother and sister were also present on the occasion.

A video clip on events connected to Mann's life and his political journey so far was played on the occasion.

There were celebrations at Mann's native village Satoj in Sangrur district and at other places in the state.

The AAP is the first major political party to announce its chief ministerial face for Punjab.

Mann was elected as a member of Parliament from the Sangrur Lok Sabha constituency in 2014 and 2019 with a handsome margin.

Born in Satoj in October 1973, the satirist and comedian's political journey began when he joined the Manpreet Singh Badal-led People's Party of Punjab in 2011. Badal had floated the party after parting ways with the Shiromani Akali Dal. Later, he merged his party with the Congress.

In 2014, he joined the AAP and was pitted against Akali heavyweight Sukhdev Singh Dhindsa from the Sangrur Lok Sabha seat.

He defeated Dhindsa by a record margin of over two lakh votes. In 2014, the AAP had won four Lok Sabha seats in Punjab, despite the BJP performing exceedingly well in the country.

Addressing the reporters and the party workers, Mann said he would continue to work for people and put Punjab back on its feet again.

He said a 'very big responsibility' has been given to him by the party.

"Lakhs of people have reposed their faith in me and it has become my double responsibility. I will work with double courage," he added.

Kalam had once said dreams are not those that appear when people are asleep, but are those that do not let people sleep, he said.

Earlier, Kejriwal said, "It is a historic day for Punjab. Every Punjabi is eagerly waiting to know who will be the AAP's chief ministerial face. Over the past few months, wherever I went, people would ask who is the 'dulha' (chief ministerial face)? I used to tell them to have patience and that we will give such a face that the entire state will be proud of."

In June last year, Kejriwal had said the AAP's choice for the top post will be from the Sikh community.

"In Punjab, we saw the chiefs of traditional parties nominating their sons, daughters-in-law or other relatives for the chief minister's post. Bhagwant Mann is my younger brother. Had I declared his name, it would have been said that Kejriwal has indulged in favouritism," the Delhi chief minister said.

Mann's younger sister Manpreet Kaur said it was a memorable day for the family.

"I consider myself fortunate that the party and the people of Punjab have entrusted my brother with a very big responsibility.

"We come from a humble background and we are aware of people's problems. Earlier, my brother used to raise these issues through satire when he was a comedian," she said, adding that before Mann, no one from the family had even contested the panchayat polls.