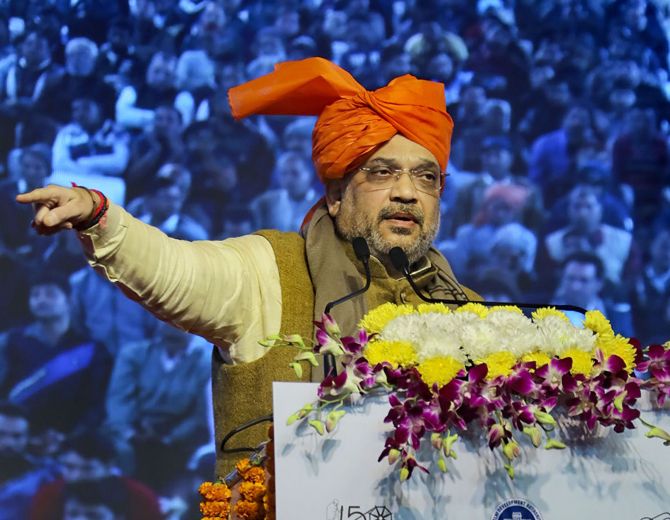 Union Home Minister and Bharatiya Janata Party president Amit Shah on Monday accused the Aam Aadmi Party government in Delhi of misleading the people for five years and said after the February 8 assembly polls, a new dispensation will take over and accelerate development in the national capital.

In a series of tweets, Shah also alleged the AAP government made only promises throughout its tenure and now in the last three months, public money was being spent on advertisements for its announcements.

'I am confident that through this festival of democracy, the government led by a party, which misled people for five years and gave hollow promises, will be defeated and a government will be formed under the leadership of Prime Minister Narendra Modi that can fulfil the people's aspirations,' he said.

Shah said the people of Delhi are still looking for free Wi-Fi, 15 lakh CCTV cameras, new colleges and hospitals, as promised by the AAP government.

Welcoming the announcement of the polls, Shah said this election will lay the foundation for accelerating development in Delhi.

'I hope that the people of Delhi will vote in large numbers and create a new record,' he said.

The home minister appealed to the BJP workers to tell people of the national capital not only about the historic work done by the central government, but also the truth about the AAP government, which has been a 'hindrance to the development of Delhi'.

The elections to the 70-member Delhi assembly will take place on February 8 and results will be declared on February 11, the Election Commission announced on Monday.

Earlier in the day, Shah accused the Congress and the AAP of 'burning the national capital in the fire of riots'.

Addressing a gathering in New Delhi, Shah said the Congress and the AAP 'misled the youth and people of Delhi and committed the sin of burning the national capital in the fire of riots'.

Congress leader Rahul Gandhi, his party and AAP are responsible for 'riots' and breach of peace in the national capital over the amended citizenship law, he alleged.

"Unashamed, they are still saying they will give legal aid to those behind the riots, go to their houses and take care of them," he charged.

Shah said Prime Minister Narendra Modi brought in the new legislation to give citizenship to minorities from Pakistan, Bangladesh and Afghanistan who have sought refuge in India, but 'Congress and AAP, especially Rahul and Priyanka (Gandhi Vadra), are misleading minorities in the entire country'.

"They are telling them 'you will lose your citizenship due to CAA'. There is no provision in the amended law that takes away citizenship of people. Why are you lying?" Shah said.

The country is 'watching with binoculars Rahul Gandhi supporting rioters', he said, adding the Congress leader is identifying himself with those vitiating peace in the country.

Shah, who is also the BJP president, said that Delhi bore the brunt of 'riots' for four days during the recent violent protests against the Citizenship Amendment Act (CAA).

He held the AAP government and the Congress responsible for it.

He said Rahul Gandhi and Kejriwal spoke the language of Pakistan and demanded proof from the prime minister when the forces conducted surgical strikes on terror camps in Pakistan.

"No one had the courage to revoke Article 370. Modiji did it in one stroke. Our flag is flying high in Kashmir. No one can separate Kashmir from India now," Shah said.

The Congress adopted double standards on the issue of building a Ram temple in Ayodhya. For their vote bank politics, they delayed resolution of the issue, he alleged.

"Don't worry. Let Rahul, Kejriwal and company do whatever they want. A sky-touching temple will be built in Ayodhya," he said.

The home minister also criticised Kejriwal for not granting sanction to prosecute those who allegedly raised anti-India slogans on JNU campus in 2016.

"Some students shouted anti-India slogans, said 'Bharat tere tukde honge'. Tell me should not they be sent to jail? But Kejriwal is not granting sanction to prosecute them. Who do you want to save, Kejriwal ji?" he asked in a dig at the AAP chief ahead of the Delhi Assembly polls.

At the Tughlaqabad event, the home minister accused the AAP government of doing nothing to improve the lives of the people of Delhi and only deceiving them by publishing advertisements in the past three months about its tenure.

Shah took a dig at the Kejriwal dispensation over the various schemes implemented by it.

"Kejriwal had promised to install 15 lakh CCTV cameras for the safety of residents of Delhi. People are looking all over, but can't find any camera," Shah said.

"The AAP government had also promised free WiFi. However, your phone's battery will drain while searching for WiFi signals as they are nowhere to be found."

The BJP president claimed that the Delhi Jal Board, which he said would register a profit of Rs 150 crore, was running at a loss of Rs 800 crore under Kejriwal.

"Though Kejriwal reduced water bills, he supplied poison-like water to the people of Delhi," Shah said.

"The poor water quality in Delhi speaks volumes about your inability to govern the city."

On the AAP government not joining the Centre's Ayushman Bharat scheme, Shah alleged that Kejriwal feared if the programme was implemented in Delhi, the people would favour the BJP in the assembly election.

Kejriwal had said on Sunday that the healthcare schemes of the Delhi government were better than Ayushman Bharat, underlining that such programmes of his dispensation was completely free for all irrespective of the rich or poor.

Shah also alleged that the AAP dispensation had done maximum damage to the poor and people living in the rural areas.

He accused the Delhi government of waiting for the election to regularise the unauthorised colonies.