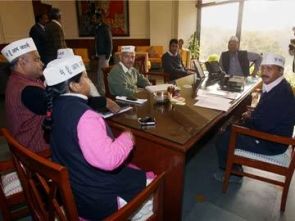 After its success in the Delhi assembly polls, the Aam Aadmi Party National executive met in New Delhi on Saturday to decide on its strategy for the Lok Sabha elections with a senior leader saying his dream would be to see Arvind Kejriwal as the prime minister.

Another AAP leader said the first list of AAP candidates for the upcoming Lok Sabha elections should be out in 10 to 15 days.

Before going into the meeting, AAP leader and Delhi Chief Minister Kejriwal said the party is meeting to plan the strategy for the Lok Sabha polls and all the issues that are before the party. However, there will be no discussions with regard to the names of the candidates for the polls, he said.

Speaking to reporters, senior AAP leader Yogendra Yadav said the country must have better options than Rahul Gandhi and Narendra Modi for the prime minister's post.

Asked if he would like to see Kejriwal as the prime minister he said, "We have again and again said that Rahul and Modi's fight (for the post) is unfortunate. The country must have better options than this.”

"But are we in the position to (say that Kejriwal should occupy the post). We will have to discuss that. My dream is to see Kejriwal as the prime minister. He is capable of it but in politics one has to see ....strength and where we stand," he said.

AAP leader Sanjay Singh said the first list of party candidates for the upcoming Lok Sabha elections should be out in 10 to 15 days.

The 23-member AAP national executive is met at the Constitution Club to discuss plans and strategies for the general elections.

AAP had bagged 28 out of 70 seats in the Delhi assembly elections, riding on its main plank of fighting against corruption and price rise.

Yadav said, "It is the first meeting of the national executive which is our highest decision-making body of the party so the idea would be to review what we did in Delhi and to plan for the Lok Sabha elections, to have a national perspective.”

"There are also some organisation matters to be settled," he added.

The AAP has already decided to fight all the seats in Gujarat and will also contest in Haryana and Uttar Pradesh.

Apart from Delhi, key party functionaries from Maharashtra, Karnataka, Haryana and Tamil Nadu are present at the meeting.