'Baby Mufflerman' Aavyan Tomar, who stole the hearts when he dressed up as Aam Aadmi Party convenor Arvind Kejriwal, will be a special invitee at the swearing-in ceremony at the historic Ramlila Ground in New Delhi on February 16. 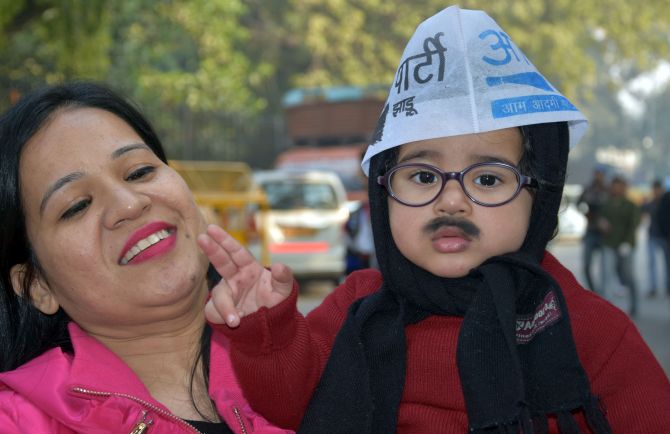 IMAGE: A woman holds a child dressed up as Delhi Chief Minsiter Arvind Kejriwal as she celebrates the party's success at the polls. Photograph: ANI Photo

An AAP functionary said Tomar has been invited for the oath-taking ceremony.

Tomar, who is little more than a year old, hogged the headlines after he was spotted at the party office dressed like Kejriwal -- with spectacles, party cap, a sweater and muffler.

"Big Announcement: Baby Mufflerman is invited to the swearing in ceremony of @ArvindKejriwal on 16th Feb. Suit up Junior!," Aam Aadmi Party tweeted along with a photo of him dressed like Arvind Kejriwal.

Aavyan lives at Mayur Vihar in east Delhi. His father, Rahul Tomar, is an AAP supporter.

He and his family were unable to meet Kejriwal at the party headquarters on February 11, a day when the results of the Delhi assembly elections were declared.

After Aavyan's photos went viral, he was dubbed as 'Baby Kejriwal', 'Baby Mufflerman' and 'Chhota Kejriwal'.

The AAP national convener will take oath on Sunday as the Delhi chief minister at the Ramlila Ground for the third consecutive time.

The AAP won 62 seats in the 70-member Delhi Assembly, while the Bharatiya Janata Party bagged the remaining eight seats. The Congress drew a blank for the second consecutive time in the Delhi polls.