Independent regional parties like the Bahujan Samaj Party, the Biju Janata Dal, the All India Anna Dravida Munnetra Kazhagam, the Aam Aadmi Party and YSRCP on Monday supported a resolution in Rajya Sabha to scrap Article 370 in Jammu and Kashmir and a bill to reorganise the state in two separate union territories of Jammu and Kashmir, and Ladakh. 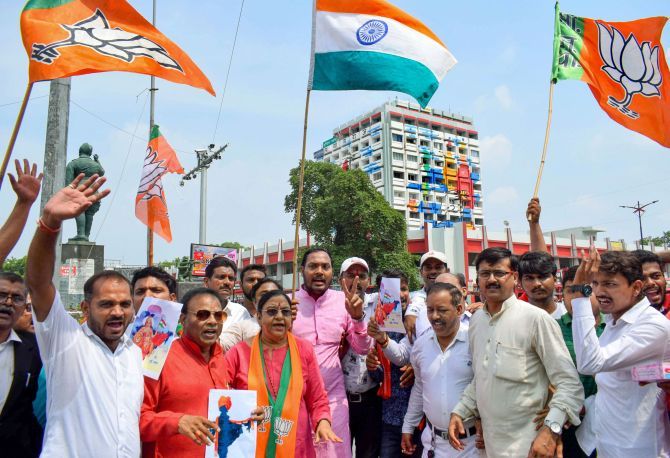 The National Democratic Alliance constituent Janata Dal-United , however, walked out of the House in protest, while all other allies of the Bharatiya Janata Party like the Shiv Sena, the Shiromani Akali Dal, the Asom Gana Parishad and the Bodoland People's Front strongly supported the move.

The government also got support from Delhi chief minister and Aam Aadmi Party convenor Arvind Kejriwal, who said he backed the Centre's decision and hoped it would bring "peace and development" in the state.

They also squatted in the well of the House and continued to raise slogans in protest.

Some members of the Samajwadi Party were also sitting in the well.

"Our party gives complete support. We want that the bill be passed. Our party is not expressing any opposition to Article 370 and the other bill," Misra said amid applause from treasury benches.

Rising to support the resolution, BJP MP Bhupender Yadav targeted the opposition, especially the Congress for not doing anything to ensure progress of the state and bring its people to the mainstream for the last 70 years.

He also targeted the Peoples Democratic Party for "ruining" democracy, after its members tore the bill.

"This is a historic moment of glory that will ensure social justice in the country after abolition of Article 370 ...It is in national interest," he said supporting the bill.

Yadav alleged that the Congress has done nothing for the improvement of people in the state.

He claims Article 370 was "provisional" and recalled how Sikkim was integrated as a state of India within a day, as also declaration of Goa, Daman and Diu and Puducherry.

He said Syama Prasad Mookerjee had "sacrificed his life in Kashmir" and today the BJP was "reclaiming the land".

He highlighted the achievement of the Narendra Modi government and said this will allow 130 crore people of India to visit the state and reside there.

The BJP leader claimed that the government had discussed the issue of bringing the Jammu and Kashmir reservation bill in the meeting of the Business advisory committee on August 2, which had earmarked two hours for the same.

He said the opposition's claim that the government had kept them in the dark were unfounded in this regard, and urged them to participate in the discussion.

"We want Jammu and Kashmir to progress and development be initiated there. Every citizen should be able to go there," he said, noting the Congress has been opposing all progressive legislations in the house be it triple talaq, RTI amendment and other bills.

He said not just has the dream of Syama Prakash Mookerjee been fulfilled, but also of Bal Thackeray, who would be happy in heaven today.

He termed Article 370 as a "shaitan" (demon) and said this "bhashmasur" and "kalank" (stigma) should be brought to an end.

"Jammu and Kashmir has been included in India not in 1947, but today. The language of threats should end today and the government has shown courage to take this step," Raut said terming it as a "historic day" for taking this "difficult decision".

Pointing towards two Congress members who were sleeping in the House, he said, "The opposition is sleeping and let them sleep".

YSR Congress MP V Vijaysai Reddy said this subject has affected the country for many years.

He termed this as a courageous decision by the home minister.

He said had Jawaharlal Nehru entrusted the task of handling Kashmir to Sardar Vallabh Bhai Patel, one would not have been discussing this issue.

Biju Janata Dal MP Prasanna Acharya condemned the action by PDP members in tearing fficial papers and said it is a black day for Parliament.

"I condemn this. I and my party unequivocally condemn this,", he said while pointing to the alleged tearing of copies of the Constitution by PDP members.

"Today, Jammu and Kashmir has become an integral part of India," he says while supporting the bill.

He also said that one day, Pakistan occupied Kashmir should also become an integral part of India.

"We are a regional party. But for us the nation comes first. Our party supports the resolutions," he says.

AIADMK MP A Navaneethakrishnan, who had to move to a different seat amid opposition protests, supported the bill.

He said he welcomes the statutory resolutions and the bills. "There is nothing to worry," he says.

Reading out from the Constitution, he says the Article was temporary. He says "Amma was for this."

Nominated MP Swapan Dasgupta said it is a proud moment for the country.

"In future, we will not have bills with a clause that says 'this is not applicable to the State of Jammu and Kashmir.' We have made all citizens of the country equal. We have established the sovereignty of Indian Parliament to the whole of India," he said while lauding the prime minister and the home minister.

Shah quoted a provision under Article 370 to prove that the President can scrap it by a Presidential order and the same has been done.

The House skipped lunch hour and continued discussion on the resolution and the bill. Opposition parties which were protesting in the well later resumed their seats and participated in the discussion.

The chairman had allowed amendments to the bill initially till 12:30 pm but later extended the time till 2:30 pm for the state.