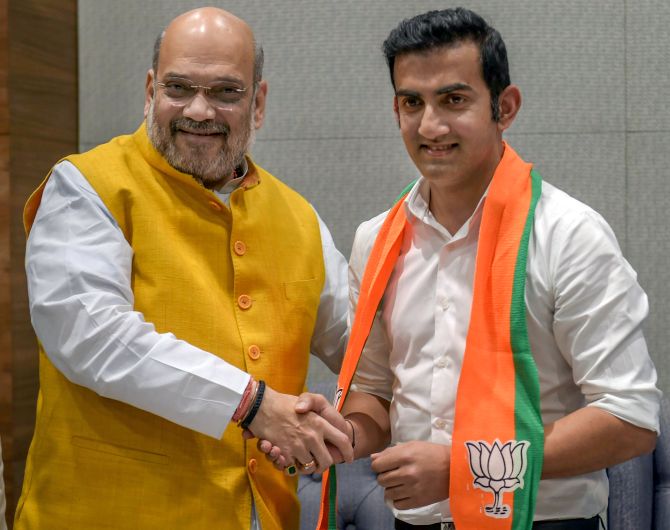 The Aam Aadmi Party on Friday claimed that the name of East Delhi Bharatiya Janata Party candidate Gautam Gambhir figures twice in electoral rolls and it has filed a criminal complaint against him in Tis Hazari Court over the issue.

Replying to the allegations, BJP Delhi president Manoj Tiwari said the 'AAP is loosing elections' that is why it is raising such issues.

All documents of Gambhir are correct and no one can stop him from fighting the election, Tiwari said.

"We are for positive politics and will not be affected by their negative politics," Tiwari said.

"We have filed a criminal complaint in Tis Hazari Court against Gambhir," she said.

The court said it will hear the matter on May 1.

The complaint seeking directions to police to investigate the matter has been put up for consideration before Metropolitan Magistrate Viplav Dabas.

Atishi alleged that the cricketer-turned-politician has two voter IDs of Rajendra Nagar and Karol Bagh, and he faces up to one year in prison for this offence.

AAP chief Arvind Kejriwal asked voters to not 'waste' their vote on someone who will get disqualified soon.

As per Section 17 of The Representation of the People Act, 1950, no person is entitled to be enrolled as a voter in more than one constituency. Section 31 makes false declaration in the matter of inclusion or exclusion of voter rolls punishable with up to one year in prison.

Consequently, any such declarations made in order to obtain registration as a voter in two or more constituencies is a criminal offence punishable with imprisonment up to one year, or fine, or both.

The complaint has alleged that Gambhir, the East Delhi BJP candidate, has enrolled 'deliberately' and 'illegally' as voter in at least two separate constituencies -- Karol Bagh and Rajinder Nagar.

The plea, filed by advocate Mohd Irshad, further alleged that Gambhir has provided false information in his nomination papers, accompanying affidavit and other documents preceding voter screening and registration in order to be seen as qualified to contest elections and potentially secure a membership of the Parliament.

In the affidavit submitted to the returning officer at the time of nomination, Gambhir had mentioned that he is only registered to vote in the Rajinder Nagar assembly seat, Atishi alleged.

However, upon scrutiny it was discovered that Gambhir was also registered to vote in the Karol Bagh assembly constituency, she said.

"This fact was also deliberately and willfully concealed by Gambhir during the time of filing and scrutiny of his nomination, as witnessed by the Returning Officer, presumably to avoid rejection of his nomination.

"The concealment of information provided in an election affidavit is also punishable under Section 125A of the said Act, with up to six months of jail," she said.

It is pertinent to recall that Gambhir's nomination had been held up due to objections raised by the AAP candidate due to technical errors in the affidavit.

"Unfortunately for the public, a candidate who is unaware of the law and legal processes has been parachuted into the fray to extract a benefit from his stardom.

"But the party and the candidate will pay the cost of unpreparedness and inexperience through eventual disqualification and possible jail term for Gambhir," she added. 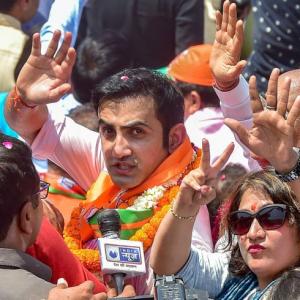