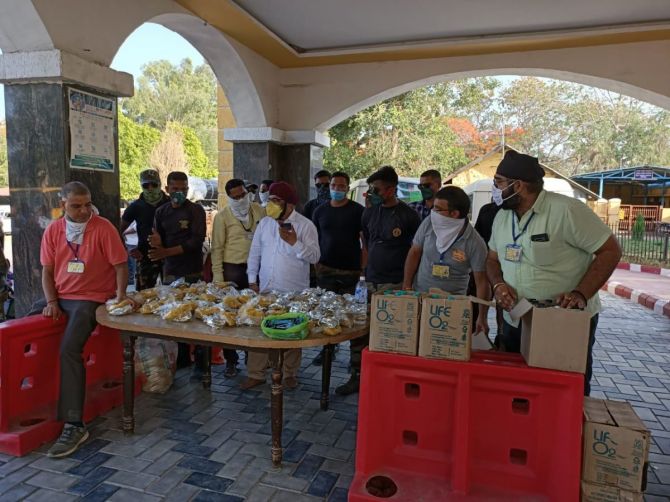 When the lockdown was announced and as hardships spread, many people across the country stepped out to help people with their travel, with food and medicines.

At the same time the Langar Seva Group sprang up in Ahmednagar, Maharashtra, to help feed the people during the lockdown, and seven months later they continue to function.

So far they have delivered 426,000 food packets, 2,350 ration kits and 2,400 boxes of mineral water. They have also distributed study material to 650 children and used mobiles and laptops to 38 students.

Harjeet Singh Wadhwa, an engineer, who started the initiatve, says they started their group on March 22, 2020.

There were seven volunteers in the beginning, and they had circulated a number which people had to call or sms if they were in need of food. At its peak they had 65 volunteers working with them, and at present there are 22 people working for them.

There are only two paid workers, one is a cook and the other is a caretaker who keeps their workplace clean.

The volunteers are businessmen and professionals.

"During the lockdown no one was able to go out as everyone was worried about the coronavirus," Wadhwa tells A Ganesh Nadar/Rediff.com.

They set up an office at the Top-Up petrol pump nearby where initially people had to come to collect the food packets.

The local police were also partners in the Langar group. The volunteers would be sent an SMS where they had to deliver food at the doorstep of those who needed it. On the first day they delivered 350 food packets. 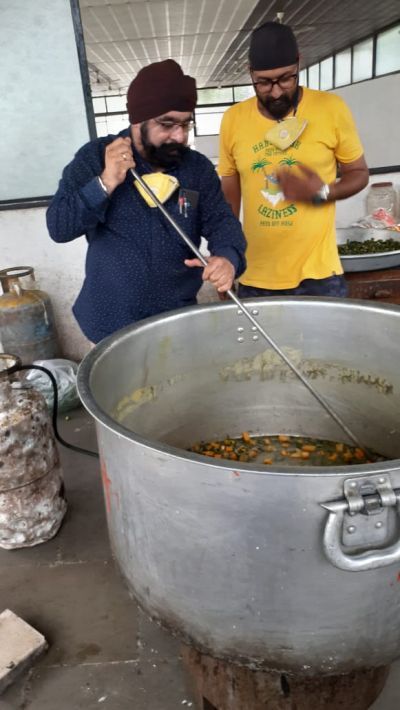 The local gurdwara, the Sindhi committee and the Jain Samaj used to give them food packets. Harjeet's (left) home supplied 100 packets, other members of the group also prepared food packets.

As time passed the requirements increased as did the number of volunteers.

On March 29 the Ahmednagar police gave them their lawn space which had a car park and a kitchen. Thus started their kitchen on April 3, after they hired a cook.

That day they cooked and packed some 1,300 meals and distributed more than 5000 packets -- the remainder was provided by other groups.

In the beginning they gave rice every day. Later they hired a roti-making machine. After that they supplied a rice meal at one time and chapatis plus vegetable at another time.

A group of volunteers collected the names of people who wanted dry rations. This list was given to the police who verified if the people were genuinely in need. Additional Superintent of Police Sagar Patil and Dy SP Sandeep Mitke continuously worked with the Langar group, adds Wadhwa.

The dry rations were sent to poor people, including tribals. And there was help being provided to others, as well, like migrants, students from the north east, and local artistans.

In one instance, children were returning from Kota where they had gone to prepare for the IIT entrance exams. Four busloads coming to Maharashtra had to pass through Ahmednagar and the children were given cold drinks, biscuits, food packets and water.

'So far people were only taking our temperature, firs time we are getting food and water,'the students told the Langar group volunteers.

In another instance, sugarcane workers going to Beed were passing through Ahmednagar on bullock carts. The volunteers noticed that many of the bulls's hooves were bleeding as their worn out shoes had not been replaced. All the ironsmiths had closed their workshops.

The volunteers arranged for ironsmiths to replace the shoes for the bulls. They also gave food packets to the workers.

In yet another instance, 11 Shramik trains left from Ahmednagar. Each train had 1,400 to 1,500 passengers. They gave all the passengers food packets and two bottles of water.

When bus services resumed, 120 buses started from Ahmednagar every day. There were 30 passengers in each bus. Food packets and water was given to all passengers. At the bus stop other NGOs were also helping out.

Initial finance for all this came from friends. This group, below, was from the batch of 1989 at the Sacred Heart Convent High School, Ahmednagar. 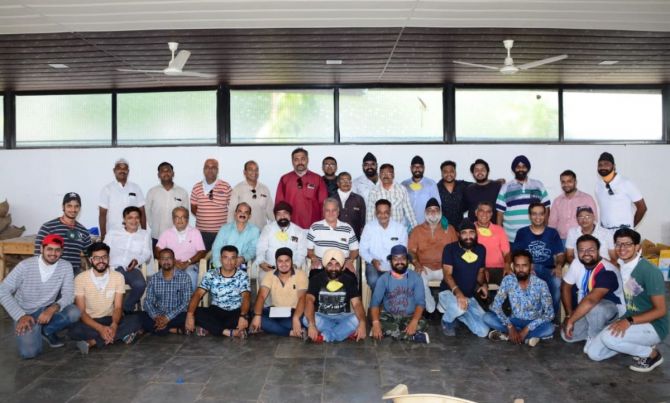 So far they have received donations of around Rs 8 lakh and received Rs 1.2 crore worth of food material.

At present the group feeds around 400 people every day. Some 60 people receive two meals a day and the rest one meal a day. They also supply food to three Covid centres.

From August 10, they also distributed Mansura Ayurvedic Kada containing some 19 ingredients. They prepared 200 litres a day and distributed it to 4,000 people daily. Around two lakh people so far have taken this kada in Ahmednagar. Among them, very few people have tested positive for Covid.

They have also started a Covid centre for women along with the Ahmednagar police and the local municipal corporation. The centre has 80 beds.

Ahmednagar is about 30 sq km in size. The group has divided the city into eight parts, with each area under two volunteers who cart around 600/800 packets per meal that was distributed twice a day. They also distributed food in containment zones after taking all necessary precautions.

It was not only the poor who received the food, even people who did not know to cook were given food packets. As were hospitals and senior citizens. The group realised that everyone needed food irrespective of their class or financial position.

People who helped are the Punjabi, Sikh, Sindhi, Jain, Gujarati communities, Lions Club among others along with the police department of Ahmednagar.

It is not possible to mention all the names of the 65 volunteers. But among them are Harjeet Singh Wadhwa, Prashant Munot, Prithpalsingh Dhuppar, Rahul Bajaj, Deepak Kukreja, Dinesh Chopda and Ishwar Bora. 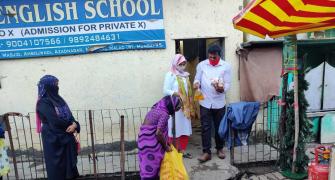