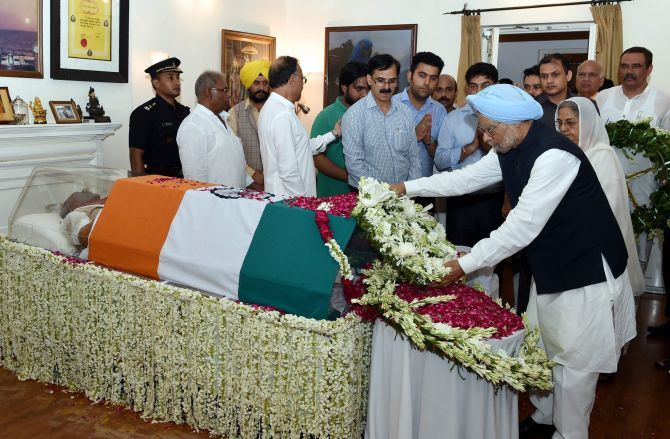 The top Congress leadership condoled the demise of former prime minister Atal Bihari Vajpayee on Thursday with party chief Rahul Gandhi saying India had lost a great son who will be missed.

Vajpayee, 93, died at the All India Institute of Medical Sciences, New Delhi, on Thursday evening after a prolonged illness.

Offering his condolences to Vajpayee's family and admirers, Rahul Gandhi said the former prime minister was loved and respected by millions.

'Today India lost a great son. Former PM, Atal Bihari Vajpayee ji, was loved and respected by millions. My condolences to his family and all his admirers. We will miss him (sic),' he said on Twitter.

In her condolence message, Sonia Gandhi described Vajpayee as a 'towering figure' who stood for democratic values and demonstrated this commitment in all his acts.

Expressing sadness over his demise, the former Congress chief said Vajpayee's warm personality and gift of friendship had won him admirers and friends across the political spectrum and from every walk of life.

"I am deeply saddened by the passing away of Shri Atal Bihari Vajpayee....His death leaves behind a huge void. I join millions of our fellow Indians in mourning his loss and pray for the departed soul," she said.

"Shri Vajpayee was a towering figure in our national life. Throughout his life, he stood for democratic values and demonstrated this commitment in all his acts, whether as a parliamentarian, a cabinet minister, or prime minister of India. He was a spellbinding orator, a leader of great vision, a patriot to the core for whom the national interest was paramount.

"But above all, he was a man with a very large heart and a real spirit of magnanimity. One saw that in all his interactions -- with other political parties and their leaders, with foreign governments, with coalition partners, and indeed with his own political colleagues, whom he always treated with respect and courtesy," Sonia Gandhi said.

Singh, in his condolence message, hailed Vajpayee as a great patriot and one of the tallest leaders of modern India who spent his whole life serving the country as he expressed profound sorrow at his predecessor's demise.

Describing Vajpayee as a great prime minister and an outstanding parliamentarian, the Congress leader said the former premier was an excellent orator and an impressive poet.

In a letter to Vajpayee's foster daughter Namita Kaul Bhattacharya, Singh said Vajpayee was a 'great patriot' and people from all walks of life, irrespective of their political leanings, loved and respected him.

He said Vajpayee proved his ability both nationally and internationally and helped India improve its ties with many countries, including its neighbours.

'I have learnt with profound sorrow about the sad demise of Bharat Ratna Shri Atal Bihari Vajpayeeji. An excellent orator, an impressive poet, an exceptional public servant, an outstanding parliamentarian and a great prime minister, Shri Vajpayeeji stood among the tallest leaders of modern India, who spent his whole life serving our great country.

'His services to our nation will be remembered for a long time to come,' Singh said in his condolence message.

'His ability and personality were such that people from all walks of life, irrespective of their political leanings, loved and respected Shri Vajpayeeji. His services to our nation will be remembered for a long time to come,' the former prime minister said in his letter to Bhattacharya.

He added that his wife joined him in conveying heartfelt condolences to her and the other members of the family.

Leader of Opposition in the Rajya Sabha Ghulam Nabi Azad said he was deeply saddened by the demise of Vajpayee, who was a great human being and a true statesman.

"He never hesitated in giving full credit to the opposition party leaders whenever due," he said.

Congress's Leader in the Lok Sabha Mallikarjun Kharge hailed Vajpayee as a great parliamentarian, public servant, orator, poet and a distinguished prime minister and said his services to the nation will never be forgotten.

Condoling Vajpayee's demise, senior Congress leader Anand Sharma said, "It is a great loss to the country. It was a joy to listen to Atalji, he cut across ideology, he was a person who had compassion and his belief to take India together is to be remembered. India has become poor in his loss. He has left a deep imprint."

Source: PTI© Copyright 2021 PTI. All rights reserved. Republication or redistribution of PTI content, including by framing or similar means, is expressly prohibited without the prior written consent.
Related News: Atal Bihari Vajpayee, Sonia Gandhi, All India Institute of Medical Sciences, Rahul Gandhi, Congress
SHARE THIS STORY
Print this article
'Vajpayee was second only to Nehru'

When Modi staged a 'coup' against Vajpayee
The nuclear tests: Vajpayee's finest hour