A day out at the Bigg Boss house Rajul Hegde/Rediff.com joins a group of journalists in grilling the Bigg Boss housemates on the controversies swirling around the house.

It was the media’s second trip into the Bigg Boss house in eight seasons. A group of impudent journalists, me included, left Mumbai late on a Saturday afternoon to the BB house in Lonavala to grill contestants on the happenings and controversies on the show.

I had been on the first press conference in the Bigg Boss house but that didn’t stop me from being excited.

En route, we were talking non-stop about the show and discussing how best to corner the housemates.

After the media briefing, we were taken for a security check and sent inside the activity area where the press conference was supposed to he held.

The crew of the show instructed us to talk softly as the housemates were not aware of the media presence. After half an hour, the familiar and well-known voice of Bigg Boss asks the housemates to come to the activity area.

As they open the door, housemates were quite surprised to see the media in the room. They were happy to see some new faces but at the same time they were puzzled at what questions will be thrown at them. By now we all figured out Praneet Bhat was eliminated as he was missing on the stage.

Bigg Boss interrupts and says that the housemates have spent 12 weeks in the house and have seen lots of ups and down together apart from showing different sides of their behaviour. Viewers have various questions regarding the same and that is one of the reasons they have held a press conference inside the house.

Bigg Boss welcomes the media and asks us to shoot questions to the housemates one by one.

First up on the media’s sights is Dimpi Mahajan, who has given an unconditional support to Gautam Gulati and Puneet Issar. I reply to a question she says "As a viewer I used to like both Gautam and Puneet and so from day one I have supported them in the house.”

And on Pritam calling her deemak(termite), she says, “I definitely feel bad about it because it’s not funny. And it also reflects his personality”. 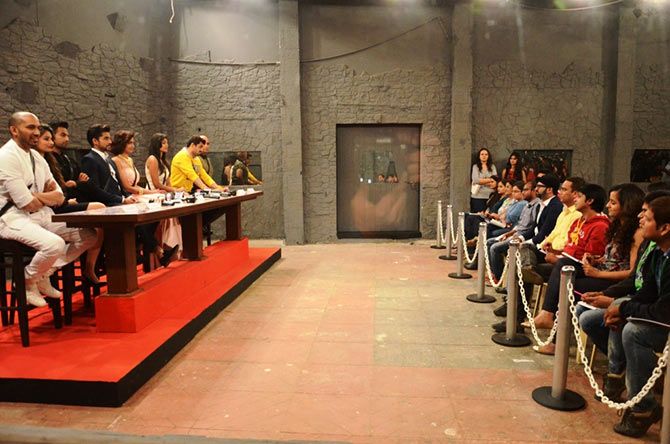 Upen Patel’s behaviour which has changed in the last one week to overly aggressive is asked if it is because he was scared that the other housemates are stronger than him.

“I really don’t know who is really strong or weak? I only know what is happening inside the house and with me. And there is action for reaction. Sometimes I can be wrong or right. I have very few friends in the show and most of them are eliminated so may I feel isolated. Karishma (Tanna) is only one left in the house now and I have shown my support to her always” he says calmly.

“Dimply are you a double dholki by nature?” asks another aggressive journo.

“If I am upset with someone close to me, I don’t keep it to myself. I go and tell it to another housemate. And that’s me. And it not about creating a rift or misunderstanding,” she reasons. On Gautam’s relationship with evicted housemate Daindra Soares which created lots of controversy outside the house, he admits, “We had an attraction toward each other but we never discussed the relationship. It is true I got scared. During the party inside the house, people came and asked me about our relationship. They were terming us a ‘couple’. It really shook me. I was worried what my mother is thinking about all this."

On what happened behind the bathroom doors, he said, "She kissed me and I kissed her back. There is a lot of attraction. She is my friend... There is an understanding between us and when I leave from here, we will see what happens,"

Dimpy said that she cried as Rahul Mahajan (estranged husband, whom she married after a TV reality show) was leaving after the house party inBigg Boss. “He is family. But we were behaving like strangers,” said Dimpy. She said she was feeling alienated at the Bigg Boss party and got emotional. But she was firm that she wouldn't rethink her stance on her marriage to Rahul. Talking about his growing difference of opinion with Karishma, Puneet said, "We have to agree to disagree as contestants of a talk show. It is important for every contestant to express his/her opinions freely.” He also admitted to be short-tempered and said that he is trying to work upon his weaknesses.

Most questions were directed at Gautam and Dimpy. And finally after an hour the media session ended and as the media were leaving, Punneet said he has lost more than 10 kilos and is planning to lose more before he comes out of the house.