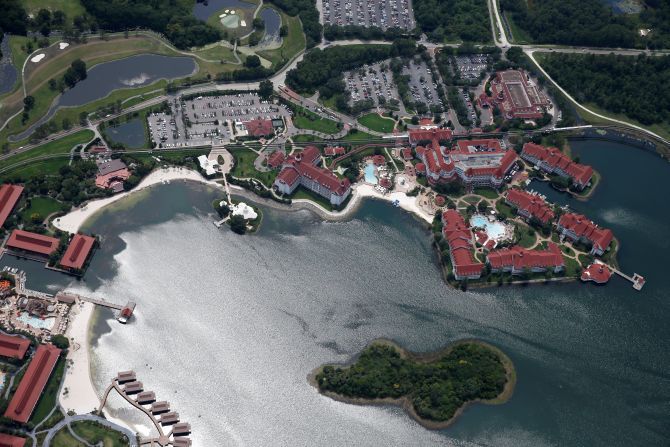 IMAGE: An aerial view of the Grand Floridian is seen after a two-year-old boy was dragged by an alligator into the lagoon at the Walt Disney World resort in Orlando, Florida, US. Photograph: Adrees Latif/Reuters

A 2-year-old boy who was snatched by an alligator at a Disney resort in Florida has been found dead, officials said on Wednesday.

Divers found the remains of the boy near the area where he was attacked on Tuesday night, Orange County Sheriff Jerry Deming said.

The sheriff identified the boy as Lane Graves. The boy's parents, who are from Elkhorn, Nebraska, were identified as Matt and Melissa Graves, CNN reported.

Lane's body had only a few puncture wounds, according to a source familiar with the investigation.

"Of course, the autopsy has to confirm that, but there is likely no question in my mind that the child was drowned by the alligator," Demings said.

The boy's family was at a movie night outdoors at the Grand Floridian resort when the boy waded into about a foot of water in a lagoon, authorities have said.

Witnesses, including the boy's horrified parents, tried to save him. His father jumped in and tried to pry the gator's mouth open. His mother jumped in, too.

The child was dragged underwater in the Seven Seas Lagoon, witnesses told authorities. The lagoon is connected to a series of canals that feed into large bodies of water, Nick Wily from the Florida Fish and Wildlife Service said.

By midmorning Wednesday, Disney had closed all beaches in its resort area "out of an abundance of caution" after the attack, a Disney representative said.

Alligators are common in Florida, where they can be found in bodies of fresh water across the state, Wily said.

However, it is "very rare" for an alligator to attack a human, he added.