Among the major political parties, chief minister Nitish Kumar's Janata Dal-United is contesting in 35 of the 71 seats, followed by its ally Bharatiya Janata Party (29), while the opposition Rashtriya Janata Dal has fielded its candidates in 42 and its coalition partner Congress is in the fray in 20 assembly segments. 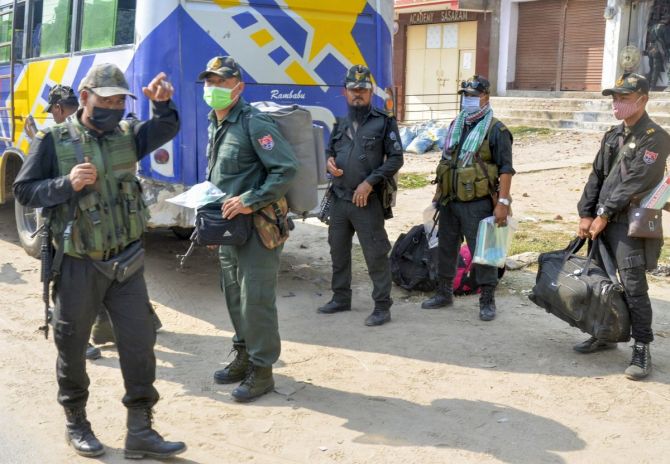 More than two crore voters in Bihar will decide the fate of 1,066 candidates on Wednesday across 71 assembly segments in the first phase of elections.

Guidelines have been issued by the Election Commission for safe conduct of the electoral exercise, which takes place in the midst of the raging COVID-19 pandemic.

These include lowering the cap on the maximum number of voters for a polling booth from 1,600 to 1,000, staggering of polling hours and postal ballot facility for those aged above 80, or those afflicted with or suspected to be carrying the contagion.

Besides, sanitisation of electronic voting machines, wearing of masks and other protective gear by polling personnel and availability of thermal scanner, hand sanitiser, soap and water will be ensured.

Of the 2.14 crore voters who will exercise their franchise, 1.01 crore are women and 599 belong to the third gender, according to data provided by the Election Commission.

The candidates include 952 men and 114 women, the maximum number (27) being in the fray at Gaya Town and the minimum (5) at Katoria in Banka district.

Among the major political parties, chief minister Nitish Kumar's Janata Dal-United is contesting in 35 of the 71 seats, followed by its ally Bharatiya Janata Party (29), while the opposition Rashtriya Janata Dal has fielded its candidates in 42 and its coalition partner Congress is in the fray in 20 assembly segments.

Lok Janshakti Party, headed by Chirag Paswan, is in the fray in 41 seats, which include all the 35 contested by the JD-U, in keeping with the call given by the young party president, who recently pulled out of the National Democratic Allaince in the state, to "dislodge" the chief minister from power.

Prominent candidates include Shreyasi Singh, the Commonwealth Games gold medallist shooter who is making her debut at the age of 27 as the BJP candidate from Jamui.

Chirag Paswan, who represents Jamui Lok Sabha and insists that he remains loyal to the BJP under the leadership of Prime Minister Narendra Modi, has assured full support of his party to the young debutant.

Shreyasi Singh is pitted against Vijay Prakash Yadav of the RJD, the sitting MLA whose elder brother Jaiprakash Narayan Yadav is a former Union minister and a close aide of party supremo Lalu Prasad.

Notably, the former Union minister's 28-year-old daughter Divya Prakash is also making her debut in the adjoining Tarapur constituency as the candidate of her father's party.

Of the six, Verma, Singh and Nirala belong to the JD-U, while the remaining are from the BJP.

The JD-U ministers seek to win their seats contending with the LJP factor.

Moreover, Verma, who has held key portfolios like education and social welfare, faces the additional challenge of wresting an RJD bastion for his party, having been asked to shift base from Ghosi where the JD-U has fielded Rahul Kumar.

Kumar's father Jagdish Sharma, disqualified upon conviction in the fodder scam, had formerly represented the Ghosi assembly seat as well as the Jehanabad Lok Sabha constituency.

The reserved Imamganj seat in Gaya district, which falls under Aurangabad Lok Sabha constituency, will see a proverbial clash of titans.

Former chief minister and Hindustani Awam Morcha president Jitan Ram Manjhi, who is the NDA candidate, is the sitting MLA.

His bid to retain the seat is challenged by his predecessor Uday Narayan Chaudhary who had been associated with the JD-U till a few years ago but is now in the fray as the RJD nominee.