Seven key Bills, including 'The Criminal Procedure (Identification) Bill' and 'The Delhi Municipal Corporation (Amendment) Bill,' have been listed on the agenda of the Rajya Sabha for the last week of the ongoing Budget session.

Six of the seven Bills listed on the agenda of the Rajya Sabha have already been passed by the Lok Sabha.

'The Criminal Procedure (Identification) Bill, 2022,' passed by the Lok Sabha last week, proposes to authorise the police to take measurements of convicts and accused for the purposes of their identifications and investigations in criminal matters to preserve records.

Union Minister for Home Affairs Amit Shah is slated to pilot 'The Delhi Municipal Corporation (Amendment) Bill, 2022,' which proposes the unification of the three municipal corporations.

The bill was passed by the Lok Sabha on Wednesday by a voice vote while various amendments moved by the Opposition MPs were rejected.

The MCD amendment bill is expected to generate heat in the Upper House, with the Aam Aadmi Party alleging that the legislative proposal has been brought before the Parliament to delay the municipal elections in the national capital.

The Chartered Accountants, the Cost and Works Accountants and the Company Secretaries (Amendment) Bill, 2021, which provides for disclosure of pending complaints or actionable information against members and firms, will be tabled by Finance Minister Nirmala Sitharaman in the Upper House.

'The Weapons of Mass Destruction and their Delivery Systems (Prohibition of Unlawful Activities Amendment) Bill, 2022,' which hasn't yet been passed by the Lok Sabha, will be introduced in the Rajya Sabha.

Tribal affairs Minister Arjun Munda would propose 'The Constitution (Scheduled Tribes) Order (Amendment) Bill, 2022,' relating to Tripura in Rajya Sabha in the last week of the Budget session in Parliament.

Rajya Sabha in the Budget session has clocked productivity of 101 per cent.

The previous week witnessed some forced disruptions and adjournments due to which 54 minutes of the Upper House's time was lost. However, members sat beyond the scheduled time for one hour and 48 minutes.

The total productive time available for Rajya Sabha is 29 hours and 30 minutes in the upcoming week. The second half of the Budget session commenced on March 14 and will conclude on April 8.

The first half of the Budget session began on January 31 and concluded on February 11. 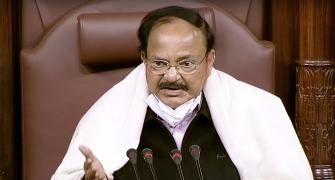 'Consensus' at all party meet not to stall LS