The Indo-Tibetan Border Police (ITBP) is not expected to be assigned any task related to internal security in the near future as more than 60 companies of the paramilitary force are being deployed all along the Line of Actual Control in the backdrop of the recent standoff with China in Ladakh, officials said on Tuesday. 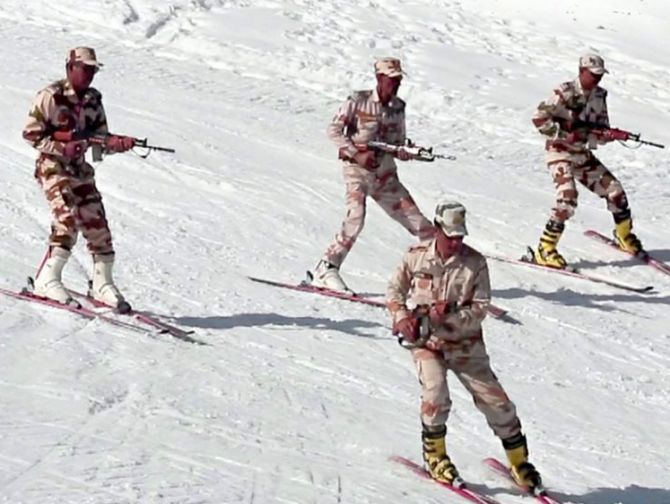 Sources in the security establishment said the force is also set to get sanctions from the Union Home ministry to raise at least nine fresh battalions soon.

They said in order to bolster troop numbers along the 3,488 km long Line of Actual Control (LAC) with China, as many as 60 companies have been ordered to move towards the front in various areas like Ladakh, Uttarakhand, Sikkim and Arunachal Pradesh.

An ITBP company has an operational strength of about 100 personnel.

Out of the 60, about 40 companies have already reached border battalion camps in various states and the troops are undergoing acclimatisation and COVID-19 quarantine before they are sent to forward bases, they said.

These units have been withdrawn from various internal security duties that they were rendering across the country, officials added.

The ITBP is not expected to be drafted in any internal security duty in the near future like law and order duties to aid state police, deployment during various festivals and also for conduct of Bihar Assembly polls scheduled later this year as their maximum presence is required in the frontier areas of the LAC, they said.

The government is also mulling to sanction it more battalions so that they can be raised and operationalised in the next two years, the officials said.

With the recent sanction of two new commands to the ITBP at Chandigarh (western command) and Guwahati (eastern command) the force needs more manpower.

A plan for grant of about 8-9 fresh battalions (with an operational strength of 1,000 people) to the force is under consideration of the Union Home ministry and a decision is expected soon, they said.

At present, the ITBP has about 34 border battalions at 180 posts along the Chinese LAC.

The Indian and Chinese armies are locked in a bitter standoff in multiple locations in eastern Ladakh.

The tension escalated manifold after killing of 20 Indian soldiers in Ladakh's Galwan Valley. The Chinese side also suffered casualties but it is yet to give out the details.

The mountain-warfare trained force has 60 operational battalions in total with 56 being regular units and four for logistics like transport and weapons.

Out of the 60 battalions, eight units are deployed for anti-Naxal operations in Rajnandgaon, Kondagaon and Narayanpur districts of Chhattisgarh.

Some of its units are also tasked for VIP security duties, protecting about a dozen high-risk persons like veteran Bharatiya Janata Party leader Murli Manohar Joshi and former Jammu and Kashmir Chief Minister Omar Abdullah among others while a contingent drawn from its Delhi-NCR units guards the Rashtrapati Bhavan.

The force was raised in the aftermath of the 1962 Chinese aggression and its posts are located between 9,000 feet-18,700 feet in the western, middle and eastern sectors of this front.