57% Bihar ministers have declared criminal cases against them: ADR

Eight of the 14 newly sworn-in ministers in Bihar have declared criminal cases against themselves, according to the Association for Democratic Reforms. 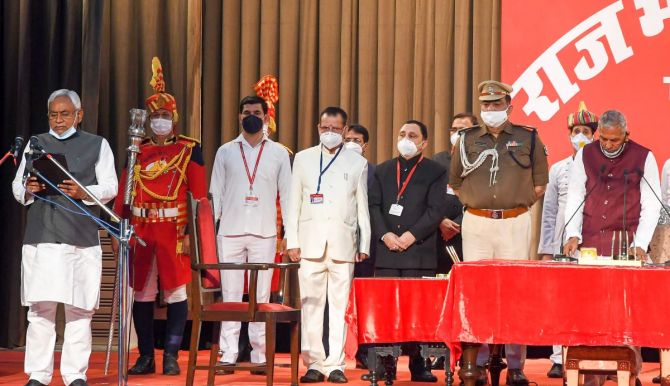 Six (43 per cent) of the ministers have declared serious criminal cases against themselves, according to the poll rights group.

Serious criminal cases are non-bailable offences with over five years of imprisonment.

Eight or 57 per cent of the ministers face criminal cases, it said.

As many as 13 (93 per cent) are crorepatis with their average assets pegged at Rs 3.93 crores, the report said.

The National Democratic Alliance won the elections after securing majority.

A 14-member council of ministers, headed by Bihar chief minister Nitish Kumar, was on Monday sworn in by governor Phagu Chauhan.