As many as 52 people have died due to Mucormycosis, a rare but dangerous fungal infection, in Maharashtra since the COVID-19 outbreak last year, a senior health department official said on Friday. 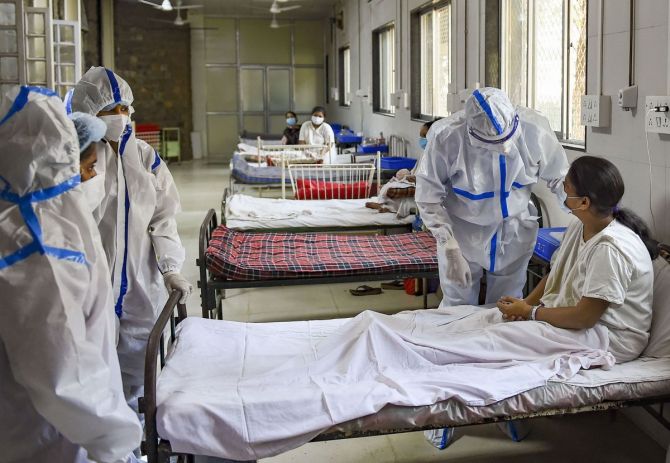 Mucormycosis, also known as black fungus, became a much talked about subject after some recovering and recovered coronavirus patients were found infected with the disease, whose symptoms include headache, fever, pain under the eyes, nasal or sinus congestion and partial loss of vision.

As many as 52 people in Maharashtra have died due to the Mucormycosis disease since the COVID-19 outbreak last year. All of them were COVID-19 survivors, but succumbed to the black fungus infection, the official told PTI.

"For the first time, the state health department has compiled a list of deaths caused by black fungus," said the official who spoke on condition of anonymity.

On Wednesday, Maharashtra health minister Rajesh Tope had said there were 1,500 cases of black fungus in the state, which is in the throes of a severe second wave of COVID-19.

Rising Mucormycosis cases, whose treatment requires a multidisciplinary approach, is expected to put a further burden on the state's healthcare infrastructure which is already under a strain.

The state will float a tender to procure one lakh Amphotericin-B anti-fungal injections to treat Mucormycosis patients, Tope had said a couple of days back.

Mucormycosis has a very high fatality rate and this has increased the woes of the health department which has deployed all its resources to combat COVID-19.

Mucormycosis was not a notified disease like malaria and hence its cases were not mapped and a database was not prepared, the official said.

With the rise in COVID-19 cases and preliminary reports of growing infection of black fungus, the state started creating a database. This exercise revealed that so far 52 people have died due to the black fungus infection, the official said.

All the 52 patients died after the coronavirus infection spread in the country. However, very few deaths took place in 2020 in Maharashtra. A sizeable number of deaths have taken place in the current calendar year, he said.

As per health experts, Mucormycosis is mostly found among COVID-19 patients who have diabetes, fluctuation in sugar level or increased iron level in the blood.

Tope has said patients with suppressed immune system and co-morbidities are vulnerable to contract the disease.

As part of a contingency plan to treat Mucormycosis patients, the state government has decided to set up separate wards for them at hospitals attached to 18 medical colleges.

The treatment requires multidisciplinary expertise because the fungal infection spreads through the nose, eyes and can reach the brain, Tope has said.

The Maharashtra government has already admitted that at least eight patients in the state have lost vision in one eye due to Mucormycosis.

Nikhil Deshmukh
© Copyright 2021 PTI. All rights reserved. Republication or redistribution of PTI content, including by framing or similar means, is expressly prohibited without the prior written consent.