News
Business
Movies
Sports
Cricket
Get Ahead
Money Tips
Shopping
Sign in  |  Create a Rediffmail account
Rediff.com  » News » 5 years after return to India, Geeta may have found her family

5 years after return to India, Geeta may have found her family

No DNA test has been conducted yet but for 29-year-old Geeta, who returned to India from Pakistan in 2015 after going there when she was nine, the search for her biological mother may have ended, an NGO says. 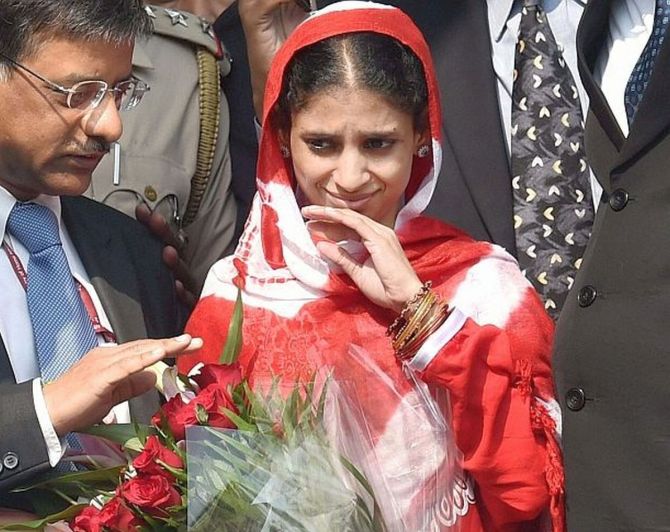 Geeta, who returned to India on October 26, 2015 after intervention by then External Affairs Minister Sushma Swaraj, was initially lodged at a facility of a hearing and speech impaired institute run by an Indore-based NGO.

The over five-year-long search to find Geeta's family led to Parbhani in Maharashtra, where she is now being trained in sign language by Pahal, an NGO working for the hearing and speech impaired.

Speaking to PTI, Dr Anand Selgaokar of Pahal said Geeta was handed over to Anand Services Society, another Indore-based NGO, on July 20, 2020 and Gyanendra Purohit of that NGO first came to Parbhani in December last year.

The search in the last five years involved screening process of at least a dozen families from Uttar Pradesh, Bihar, Telangana and Rajasthan after claims that they were Geeta's blood relations.

Purohit said the search led the NGO to Meena Waghmare (71) who lived in Jintur in Parbhani district, when her daughter Radha (Geeta) went missing.

"Meena told us that her daughter has a burn mark on her stomach and when we checked, it turned out to be true," Purohit said.

Geeta's father and Meena's first husband Sudhakar Waghmare died some years ago and she now lives near Aurangabad with her second husband, Purohit said.

Tears rolled down Meena's eyes as she met Geeta for the first time, he said. Geeta did not understand a word of what Meena said as being speech and hearing impaired, she communicates only through sign language.

It is likely that Geeta reached Parbhani and boarded the Sachkhand Express to Amritsar and later boarded the Delhi-Lahore Samjhauta Express, Selgaonkar said.

Geeta has now spent around a month-and-a-half in Parbhani and often meets with Meena and the latter's married daughter, who also lives in the Marathwada region.

"It is for the government authorities to decide on when to conduct a DNA test. Till then Geeta will continue to receive training at Pahal," Selgaonkar said.

Pakistani media reported that Geeta, who was rescued by a social welfare organisation in Pakistan after she mistakenly ended up in that country before being sent back to India in 2015, has been reunited with her real mother in Maharashtra.

Bilquees Edhi the wife of late Abdul Sattar Edhi, who now runs the world famous Edhi Welfare Trust and who developed a close bond with Geeta said the Indian girl had finally been reunited with her real mother in Maharashtra state, Dawn newspaper reported.

"She has been in touch with me and this weekend she finally told me the good news about meeting her real mother," Bilquees said.

Bilquees said they had found Geeta when she was around 11-12 years old at a railway station and gave her shelter at their centre in Karachi.

"Somehow she strayed into Pakistan and was shelterless when we found her in Karachi," she said. 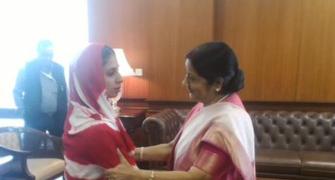 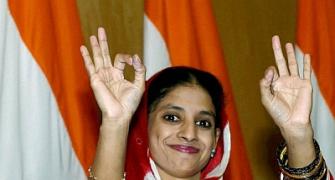 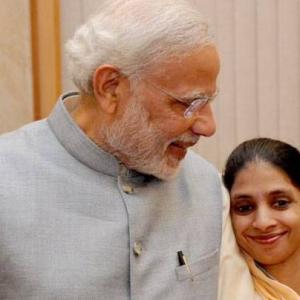 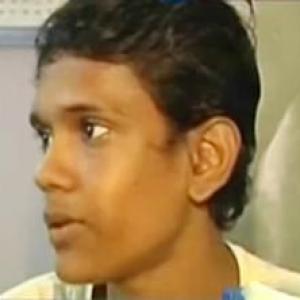