A special Central Bureau of Investigation court on Monday granted bail to two West Bengal ministers, a Trinamool Congress MLA and a former minister arrested by the central investigating agency in connection with the Narada sting tape case. The court directed that each of the four persons will have to pay two sureties of Rs 25,000 each as bail bonds.

The four leaders were also directed to meet the investigating officer in the case once a fortnight till further orders and to co-operate with him.

The CBI prayed before the special court for judicial remand of the four arrested, while their lawyers pleaded for bail to them.

They were produced before the court through the virtual mode and the hearing in the case was also held online.

The four were kept at the CBI office in Nizam Palace following their arrest in the morning from their homes in different parts of Kolkata.

The CBI counsel placed the charge sheet in the case before the court through the online mode.

The CBI claimed that the four arrested leaders were ministers in West Bengal when the alleged illegal gratification from the sting operator took place in 2014.

Praying for 14 days' judicial remand of the four, the CBI counsel submitted before the court that all the four arrested are very influential persons and the investigation process will be hampered if they are released on bail at this stage.

He also claimed that evidence may be tampered with and witnesses in the case may be influenced by the accused persons, of whom two are ministers, one is MLA and the fourth is a former minister.

Appearing for Mukherjee, Hakim and Mitra, senior advocate Kalyan Banerjee, and Chatterjee's counsel Sudipta Maitra submitted that they have cooperated with the investigation all along and as such there is no requirement for their custody at this stage, when the charge sheet in the case has already been submitted.

Banerjee, also a TMC Lok Sabha MP, submitted before the court that in a bribery case, there has to be a demand and acceptance of gratification.

He claimed that in the video that was produced, it was not seen that there was any demand by any of them.

Claiming that Mukherjee and Mitra are senior citizens, Banerjee submitted that the Supreme Court has directed that the police will not make unnecessary arrests owing to the pandemic situation.

He further submitted that Hakim, is the head of the board of administrators running the Kolkata Municipal Corporation and his remaining in custody will seriously jeopardise COVID-19 management in the city.

Banerjee also questioned the governor's authority to accord sanction to prosecute the four leaders.

Governor Jagdeep Dhankhar had on May 7 sanctioned the prosecution of Hakim, Mukherjee, Mitra and Chatterjee on a request by the CBI on the ground that all of them were holding positions of ministers in the state at the time of the alleged commission of the crime.

The Narada sting tapes, which were made public before the 2016 assembly elections in West Bengal, were claimed to have been shot in 2014, wherein people resembling TMC ministers, MPs and MLAs were allegedly seen receiving money from representatives of a fictitious company in lieu of promised favours.

The sting was conducted by Mathew Samuel of Narada News portal.

The Calcutta high court had ordered a CBI probe into the Narada sting operation in March, 2017.

The CBI had registered cases against 12 TMC leaders, many of whom are now in BJP, and an IPS officer. 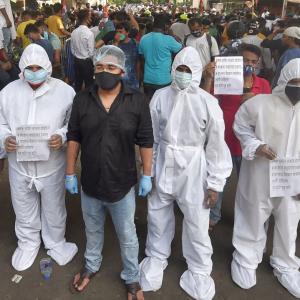