A total of 3,81,305 beneficiaries have so far been vaccinated for COVID-19 and 580 adverse events following immunisation were reported in the country till now, the Union health ministry said on Monday. IMAGE: A medic administers the COVID-19 vaccine to a frontline worker, after the virtual launch of the vaccination drive by Prime Minister Narendra Modi. Photograph: PTI Photo

Addressing a press briefing, Manohar Agnani, Additional Secretary in the ministry of health, said 1,48,266 beneficiaries were vaccinated across 25 states and union territories till 5 pm on Monday.

"A total of 3,81,305 beneficiaries have so far been vaccinated (till 5 pm on Monday) till today through 7,704 sessions, as per the provisional reports," the ministry said.

Agnani said a cumulative 580 adverse events following immunisation and seven hospitalisations have so far been reported in the country since the nationwide COVID inoculation drive began on January 16.

In Delhi, three hospitalisations were reported, out of which, two have been discharged, and one who fainted is under observation at Max Hospital, Patparganj.

The reported case of AEFI in Uttarakhand is stable and under observation at All India Institute of Medical Sciences, Rishikesh. IMAGE: Frontline workers flash the victory sign after being inoculated with the first dose of Covishield vaccine during a countrywide COVID-19 vaccination drive, at a government hospital in Howrah district. Photograph: Swapan Mahapatra/PTI Photo

"Of the two deaths reported, the death of the 52-year-old man from Moradabad, Uttar Pradesh (who was vaccinated on January 16 and died on evening of January 17) is not related to vaccination as per the post mortem report. The death was caused due to cardiopulmonary disease," he said.

The second death was of a 43-year-old man, a resident of Bellary, Karnataka. He was vaccinated on January 16 and died on Monday.

The cause of the death is anterior wall infarction with cardiopulmonary failure. The post mortem is scheduled on Monday at Vijayanagar Institute of Medical Sciences, Bellary, Karnataka, Agnani said.

"No case of serious/severe AEFI attributable to vaccination till date," the additional secretary added. 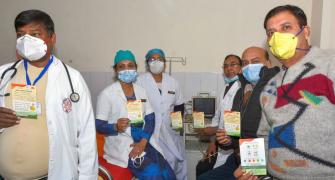 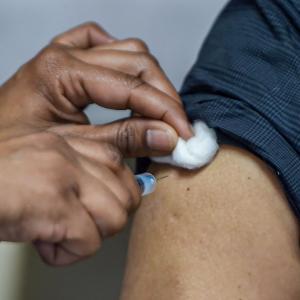 UP health worker dies day after getting COVID jab 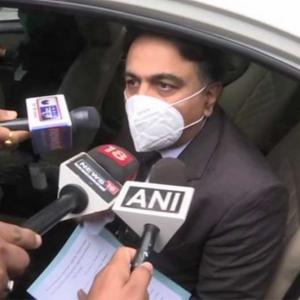