On June 23, 1985, Air India Flight 182 from Toronto was en route to New Delhi when it exploded off the coast of Ireland. 30 years later, relatives of the 329 people who perished in the Kanishka bombing gathered at a moving service in Ahakista, Cork, in Ireland. Barry Roche reports. 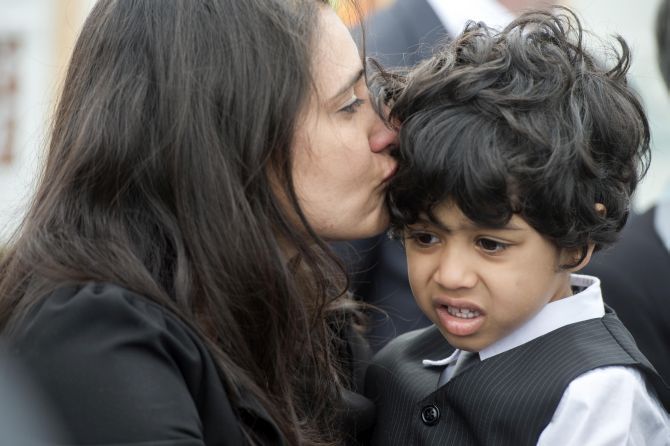 Reet Subramaniam with her son at the memorial. Reet lost her aunt in the bombing. Photograph: Mike MacSweeney/Provision

The grey clouds that stretched between the Mizen and Sheep’s Head peninsulas gave way to a streak of bright blue sky as relatives of those who died in the Air India atrocity gathered in west Cork on Tuesday to remember their loved ones.

It was 30 years on from the day when a bomb exploded on Air India Flight 182 at 8.13 am, killing all 329 passengers and crew on board the Boeing 747-237B as the plane prepared for a stop-over in London as it travelled from Toronto to India. Children from Ahakista national school who sang during the service at the Flight 182 memorial. Photograph: Michael Mac Sweeny/Provision

More than 40 relatives of the victims came to Ahakista to mark the anniversary. In keeping with practice over the years, they paused for a minute’s silence which was punctured only by the squawking of gulls and the lapping of water on the shore of Dunmanus Bay.

Several hundred Irish people joined them -- both locals and others linked to the tragedy such as former LÉ Aisling crew members who helped in the task of recovering bodies some 130 kilometres off the Cork coast. Padmini Tirupati, who lost two sons in the tragedy, is consoled by others at the service held in honour of the Kanishka bombing victims. Photograph: Mike MacSweeney/Provision

Those present heard chants in Hindi by the victim’s families and readings by Fr Gerard Galvin; Canon Paul Willoughby; Sikh reader Jasvir Singh and Dr Shashi Sharma, who read a passage from the Bhagvad Gita.

Pupils from Ahakista national school then performed the favourite chant of Mahatma Gandhi, Raghupati Raghava Raja Ram, before the mayor of Cork county, councillor Alan Coleman, paid tribute to the local community for the support they have shown the bereaved. 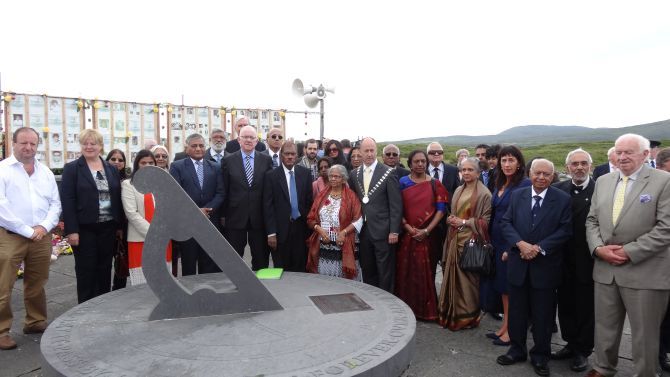 The families of the Air India Kanishka bombing victims, at the Ahakista memorial. Photograph courtesy: Head of Chancery, Ireland

Ireland's Minister for Foreign Affairs Charlie Flanagan told the gathering the world has witnessed many repugnant acts of terrorism in the last 30 years and that there can never be any justification for the murder of innocent people in the pursuit of any political end.

“What is abundantly clear is that terrorism does not deliver the political goals of its perpetrators and that governments, with the support of their people, will continue to tackle the scourge of terrorism and promote dialogue, justice, stability and peace,” he said. 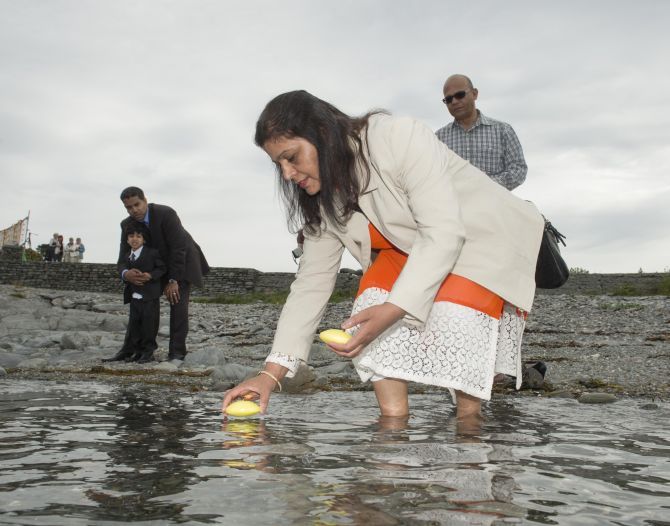 India’s Minister of State for External Affairs VK Singh expressed his sympathies and that of the Indian government to the bereaved. He also paid tribute to the people of Cork for the support and solidarity they have shown the families of the victims over the past 30 years.

Canadian minister for justice Peter MacKay said the tragedies of Air India and the separate but related bombing which claimed two lives at Narita airport in Japan “forever join us – Canada, India, Ireland and Japan -- in our shared grief and profound loss”.

All three ministers, together with councillor Coleman, Canadian and Indian ambassadors to Ireland, Kevin Vickers and Radhika Lal Lokesh, laid wreaths. A wreath was also laid on behalf of the Royal Canadian Mounted Police by Gary Bass and Jessie Rai. 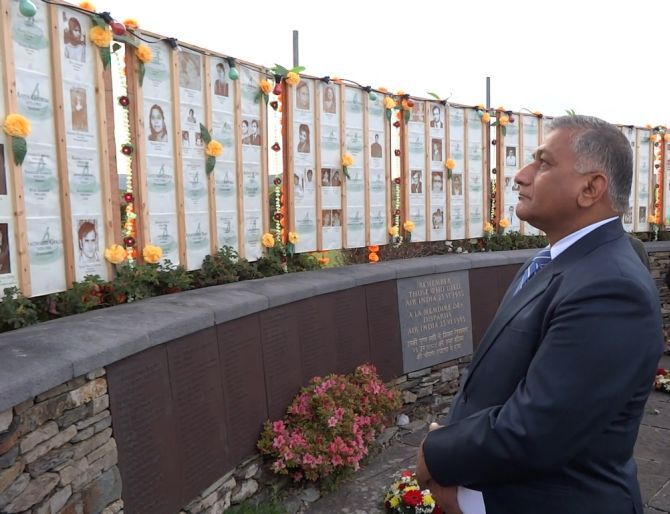 Minister of State for External Affairs General VK Singh pays his respects and lays a wreath at the memorial. Photograph courtesy: Head of Chancery, Ireland

Respectfully, they each paused before the memorial wall bearing the names of all 329 victims which on Tuesday also carried placards garlanded in orange chrysanthemums that bore photos and brief descriptions of those who perished in the bombing by Sikh extremists.

Across the length of the wall, men, women and children smiled out from black and white photographs taken more than 30 years ago, innocent of the fate that was to befall them and forever unite their families in grief in a quiet but never-to-be-forgotten corner of Ireland.