22 of world's 30 most polluted cities are in India: Report

Twenty-two of the world's 30 most polluted cities are in India, with Delhi being ranked as the most polluted capital city globally, a new report said on Tuesday. 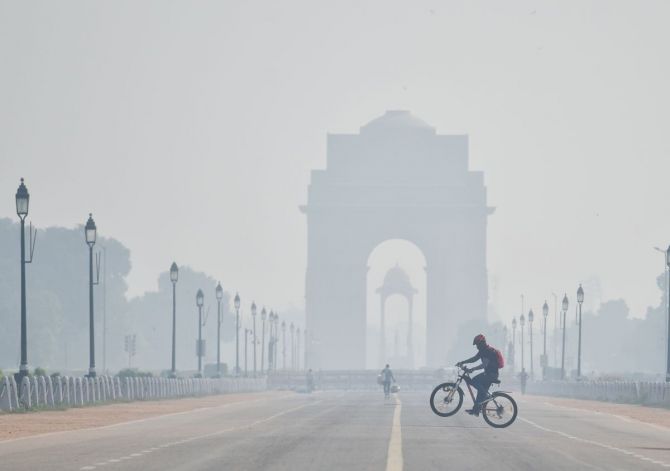 The report is prepared by Swiss organisation, IQAir, in the form of the 'World Air Quality Report, 2020', which has released globally.

The report, however, shows that Delhi's air quality improved by approximately 15 per cent from 2019 to 2020.

It said that despite the improvement, Delhi ranked as the 10th most polluted city and the top polluted capital city in the world.

Besides Delhi, the 21 other Indian cities among the 30 most polluted cities in the world are Ghaziabad, Bulandshahar, Bisrakh Jalalpur, Noida, Greater Noida, Kanpur, Lucknow, Meerut, Agra and Muzaffarnagar in Uttar Pradesh, Bhiwari in Rajasthan, Faridabad, Jind, Hisar, Fatehabad, Bandhwari, Gurugram, Yamuna Nagar, Rohtak and Dharuhera in Haryana, and Muzaffarpur in Bihar.

As per the report, the top most polluted city is Xinjiang in China followed by nine Indian cities.

Ghaziabad is the second most polluted city in the world followed by Bulandshahar, Bisrakh Jalalpur, Noida, Greater Noida, Kanpur, Lucknow and Bhiwari.

The global cities ranking report is based on PM2.5 data from 106 countries, which is measured by ground-based monitoring stations, most of which is operated by government agencies.

"The transportation sector is one of the major contributors to India's leading PM2.5 emission sources across cities," the report said.

Contextualising the global IQAir report in the Indian context, Avinash Chanchal, Climate Campaigner at Greenpeace India said while many cities, including Delhi, have recorded marginal improvements in air quality due to lockdowns, the health and economic cost of air pollution remains severe.

He said it is pertinent that governments prioritise sustainable and clean energy sources, as well as the cities, need to encourage low cost, active and carbon-neutral mobility choices such as walking, cycling, and accessible public transport.

"Speeding up the transition to clean energy and clean transport not only saves lives but also dramatically reduces healthcare-related costs," Chanchal said.

"The year 2020 brought an unexpected dip in air pollution. In 2021, we will likely see an increase in air pollution due to human activity, again. We hope this report will highlight that urgent action is both possible and necessary to combat air pollution, which remains the world's greatest environmental health threat," said CEO of IQAir Frank Hammes.