Two United Kingdom police officers are being treated in hospital after they were stabbed by a man with a knife in central London, Scotland Yard said on Friday. The Metropolitan Police said the man, arrested on suspicion of grievous bodily harm and assaulting an emergency worker, used a taser gun to attack the police officers who are said to have encountered the armed man near Leicester Square at around 6 am (local time) on Friday.

“The incident is not being treated as terror-related,” the Met Police said.

“Two officers received stab wounds and are currently being treated in hospital. We await further updates on their conditions. Their families are aware,” the Met Police said.

“Taser was deployed and the male was arrested on suspicion of grievous bodily harm and assaulting an emergency worker. He was taken to a hospital for treatment where he remains at this time. Inquiries into the circumstances surrounding the incident are ongoing,” the police said.

There is a particularly enhanced police presence across central London this week due to the state mourning for Queen Elizabeth II and to manage crowds descending upon central London to pay their respects as the late monarch lies in state at Westminster Hall in the Parliament building.

“Hundreds of police officers from other forces have now joined us in London. This is welcomed as it enables us to continue a highly visible policing presence in central London as well as maintaining neighbourhood policing and response in other London boroughs,” said Met Police Deputy Assistant Commissioner Stuart Cundy.

“We are expecting large crowds as so many will come to pay their respects to Her Majesty the Queen. Police officers will be in the areas where people are queuing to ensure they are safe,” he said.

The Queen's Lying-in-State entered its third day on Friday with thousands queuing along the River Thames for hours, many overnights.

The queue was paused for a few hours as it reached full capacity at around 8 km on Friday morning. 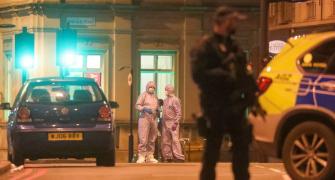