Two cases of the new Omicron variant of coronavirus have been detected in Karnataka, the Union government said on Thursday while asking people not to panic but follow Covid-appropriate behaviour and get vaccinated without delay. 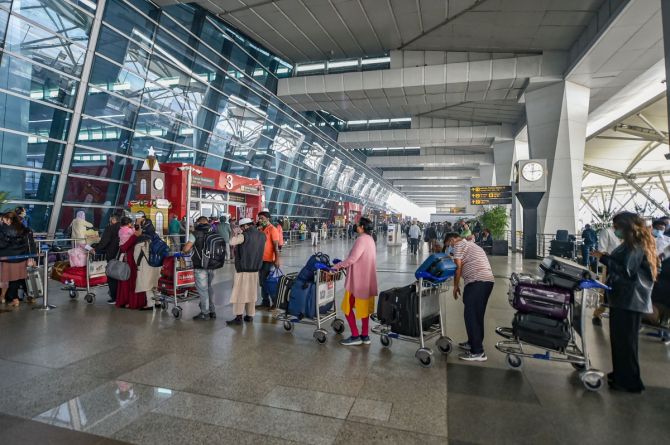 Both the patients had mild symptoms. Severe symptoms have not been noted, said Lav Agarwal, the joint secretary in the Union Health Ministry.

Of the two cases, one was a 66-year-old South African man who came to Bengaluru on November 20 and left India after testing negative, the city's civic agency officials said.

They said the other was a 46-year-old man who is said to be a doctor -- an anaesthetist -- at a hospital in Bengaluru. He tested positive on November 22 and has no travel history to South Africa or any other country, the officials said.

Both the persons were inoculated with two doses of Covid vaccine, they said.

At a press conference in Delhi, Agarwal said that following the detection of the two Omicron cases through the INSACOG network, all their primary and secondary contacts were traced in time and were being tested.

"We need not panic about the Omicron detection but awareness is absolutely essential. Follow Covid-appropriate behaviour and avoid mass gatherings," ICMR Director-General Dr Balram Bhargava said, adding that increased COVID-19 vaccine uptake was the need of the hour.

"Do not delay in getting fully vaccinated," he stressed.

Bengaluru civic agency officials said the South African national came to Bengaluru on November 20 and his samples were collected at the airport.

After he tested Covid positive, his samples were sent for genomic sequencing. The reports have come today confirming that the Covid infection was caused by the Omicron variant," BBMP Chief Commissioner Gaurav Gupta said on Thursday.

He said the person was isolated in a hotel and underwent Covid test at another laboratory. "This time, his reports came negative and he left for Dubai on November 27 as scheduled," Gupta said.

About the other patient, the BBMP chief commissioner said that since the 46-year-old man's sample had a low cycle threshold (Ct) value it was sent for genomic sequencing and the report came positive for Omicron on Thursday.

"He was initially kept in home isolation and later shifted to a hospital. He is a local person without any travel history. He is stable and is recovering. There is nothing to be concerned about, he is under watch," Gupta said.

According to the joint secretary in the health ministry, 37 flights landed in India from December 1 midnight till 8 am on Thursday.

As many as 7,976 passengers arrived from 'at-risk' countries during the period and underwent RT-PCR tests at the airports. Of them, 10 passengers were found COVID-19 positive and their samples have been sent for genomic sequencing, Agarwal said.

"It is too early to assess whether Omicron causes more severe infection or less compared to other variants, including Delta," Agarwal said quoting the World Health Organisation (WHO) which has designated the latest variant as a 'variant of concern'.

About the possibility of clamping a lockdown given the detection of the Omicron variant in India, NITI Aayog member (health) Dr V K Paul said, "Under the current situation, there is no need for it."

"Pandemic situation is under control. This is a new challenge which we will address and we have tools to tackle it. We will not panic or fear.

"We have the responsibility of wearing masks, staying in well-ventilated areas and not crowd spaces. Mask is the universal vaccine," Paul said.

Besides the cases detected in India, 373 cases of Omicron variant of SARS-CoV-2 have been detected in 29 nations so far, according to the government.

Referring to the WHO data on the global Covid scenario, Agarwal said Europe contributed to 70 per cent of the total cases in the last week.

On the other hand, the South East Asian region, including India, has only 3.1 per cent of the world's COVID-19 cases in the last one week, the press conference was informed.

About vaccine coverage, Agarwal said 84.3 per cent of the adult population in India got the first dose while 49 per cent got the second dose.

Kerala and Maharashtra have over 10,000 active Covid cases while nine states and Union Territories have active cases between 1,000 and 10,000. The weekly Covid positivity rate was over 10 per cent in 15 districts and between 5 and 10 per cent in 18 districts, he said.

To a question if flights would be banned, Paul said, "The most important question in Omicron context is that its characteristics, effect and impact is still under study not just in India but all across the world."

"We are closely observing the scientific studies. It is an ongoing work... and as scientific details come more decisions would be taken," he said.

On the detection of the Omicron variant in India, Poonam Khetrapal Singh, the regional director of WHO South-East Asia in a statement said, "It was not unexpected given the interconnected world that we live in."

"This emphasizes the need for all countries to step up surveillance, be on alert, rapidly detect any importation and take measures to curtail further spread of the virus," she added.