As many as 17 United States states and the District of Columbia have filed a lawsuit against the Trump administration's new visa policy for international students, calling it a "cruel, abrupt, and unlawful action” to expel them amidst the COVID-19 pandemic. 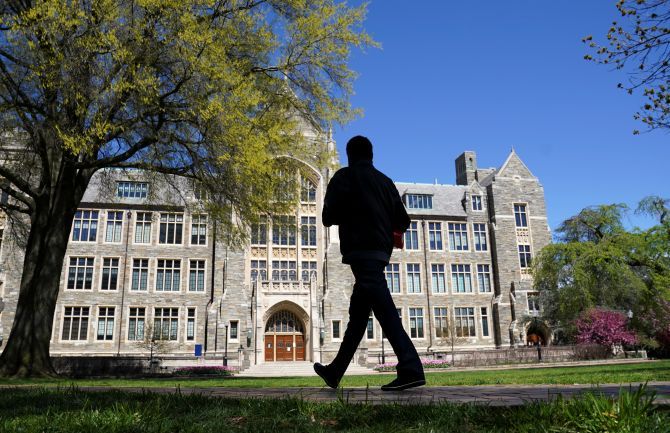 In its July 6 order, the US Immigration and Customs Enforcement declared that the nonimmigrant students with F-1 and M-1 visas attending schools operating entirely online or taking only online courses will not be permitted to remain in the United States.

The lawsuit, filed in the US District Court in Massachusetts against the Department of Homeland Security and the ICE, seeks an injunction to stop the entire rule from going into effect.

It challenges what the 18 attorneys general call the federal government's "cruel, abrupt, and unlawful action to expel international students amidst the pandemic that has wrought death and disruption across the United States".

The modifications also limit many students at normally operating schools from taking more than one class or three credit hours online in order to remain in the country.

According to a recent report of the Student and Exchange Visitor Program, there were 1,94,556 Indian students enrolled in various academic institutions in the US in January.

Massachusetts Attorney General Maura Healey, who led a coalition of 18 attorneys general in filing the lawsuit, in a statement alleged that the Trump administration did not even attempt to explain the basis for this "senseless" rule, which forces schools to choose between keeping their international students enrolled and protecting the health and safety of their campuses.

"Massachusetts is home to thousands of international students who make invaluable contributions to our educational institutions, communities and economy. We are taking this action to make sure they can continue to live and learn in this country," she said.

The lawsuit has been filed days after Harvard University and the Massachusetts Institute of Technology filed a lawsuit against ICE's latest rule that bars international students from staying in the US unless they attend at least one in-person course.

It challenges an abrupt policy change by the ICE to reverse the guidance issued on March 13 that recognised the COVID-19 public health emergency, provided flexibility for schools and allowed international students with F-1 and M-1 visas to take classes online for the duration of the emergency.

The lawsuit also alleges that the new rule imposes a significant economic harm by precluding thousands of international students from coming to and residing in the US and finding employment in fields such as science, technology, biotechnology, healthcare, business and finance, and education, and contributing to the overall economy.

Massachusetts hosts tens of thousands of international students each year -- there are currently 77,000 with active student visas -- and they are estimated to bring more than USD 3.2 billion to the economy each year. The state is also home to 92 private colleges and universities and operates 29 public institutions of higher education -- 15 community colleges, nine state universities and five separate campuses of the University of Massachusetts system.

In California, seven international graduate students -- six Chinese nationals and a German -- have filed a federal lawsuit in the Central District of California.

"The ICE policy requiring foreign students to attend in-person classes, even where their universities have determined that to do so will cost lives and endanger the campus community, in keeping with the judgement of public health experts, treats them as pawns for the president's politically motivated decision.

"It is the latest in a series of irrational actions that is deepening the pandemic crisis in our nation and it comes as no surprise that the lives being threatened in the first instance are those of immigrants, lawfully studying here to contribute productively here and abroad,” said Mark Rosenbaum, directing attorney of the Public Counsel's Opportunity Under Law project.

More than a dozen top American technology companies, including Google, Facebook and Microsoft, on Monday joined a lawsuit filed by the Harvard University and the Massachusetts Institute of Technology against the Immigration and Customs Enforcement's latest rule that bars international students from staying in the United States unless they attend at least one in-person course.

Seeking a temporary restraining order and a preliminary injunction, these companies, along with the US Chamber of Commerce and other IT advocacy groups, asserted that the July 6 ICE directive will disrupt their recruiting plans, making it impossible to bring on board international students that businesses, including amici, had planned to hire, and disturb the recruiting process on which the firms have relied on to identify and train their future employees.

The July 6 directive will make it impossible for a large number of international students to participate in the CPT and OPT programmes. The US will "nonsensically be sending...these graduates away to work for our global competitors and compete against us...instead of capitalising on the investment in their education here in the US", they said.

The Curricular Practical Training programme permits "alternative work/study, internship, cooperative education or other type of required internship or practicum offered by sponsoring employers through cooperative agreements with a student's school".

On the other hand, the Optional Practical Training programme allows up to one year of temporary employment that is directly related to an international student's major area of study, which can occur either before the student graduates and/or after his studies are complete. Students in STEM fields may obtain a two-year extension of their post-graduate OPT, they said.

Asserting that international students contribute substantially to the US economy when they reside in the United States, the legal brief said the departure of these students threatens the ability of US educational institutions to sustain critical mass -- which they need in order to maintain their standards of excellence, to train the American students who will make up the talent pool available to amici and other US companies in the future, and to perform the research that keeps US businesses on the cutting edge of innovation.

"International students are an important source of employees for US businesses while they are students and after they graduate. Finally, they become valuable employees and customers of US businesses whether they remain in the United States or return to their home countries," the companies said.

According to the IT companies, international students residing in the US make a substantial contribution to the country's GDP and have a particularly significant impact in towns and cities where colleges and universities are located. During the 2018-2019 academic year, there were more than 10 lakh such students attending institutions of higher education in the US.

The companies told the court that if these students are barred from studying in the US until the SARS-CoV-2 pandemic ends, many of them will not return: they will switch to programmes of study elsewhere in the world. And without international students, many the US STEM programmes will contract sharply and ultimately cease to exist.