Amid the Omicron variant of COVID-19 creating concern globally, Karnataka Health Minister Dr K Sudhakar on Monday said the sample of one of the two persons who arrived in Bengaluru recently from South Africa is 'different from the Delta variant'. 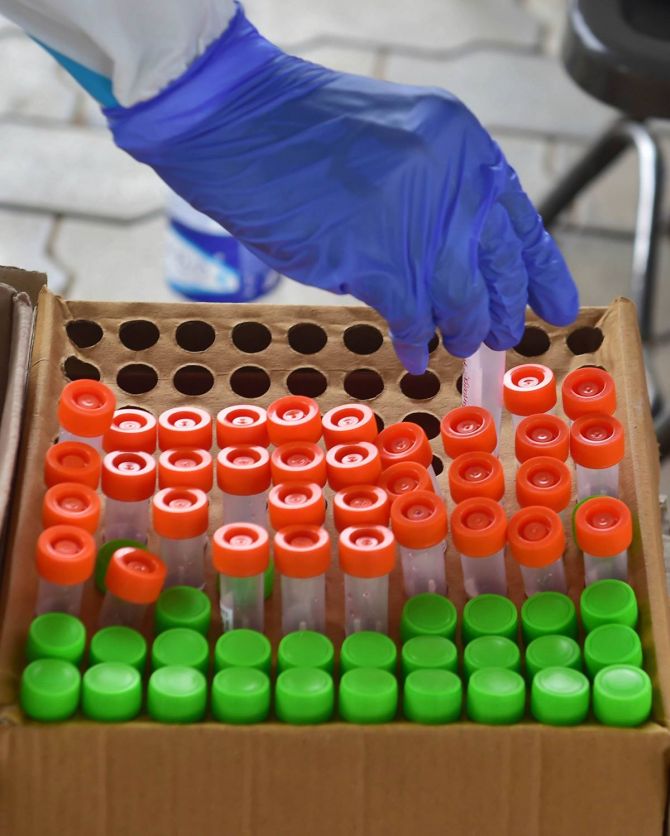 The minister said he was not supposed to say anything officially as he was still in touch with the union health ministry and the Indian Council for Medical Research officials.

"There is a delta variant for the past nine months only, but you are saying that one of the samples is Omicron.

"I cannot say aboutit officially. I am in touch with the ICMR and central government officials," Sudhakar told reporters in Bengaluru.

The sample has been sent to ICMR, he said.

Refusing to divulge the identity of the man, the minister said his COVID report shows that he has contracted a different variant of the novel coronavirus.

"There is a 63-year-old man whose name I should not disclose. His report is a bit different. It appears different from the delta variant. We will discuss with the ICMR officials and will let people know by the evening what it is," the minister said.

The minister said he would chair a marathon meeting on Tuesday with the officers of his department, from the principal secretary to the Primary Health Centre level doctors, regarding the steps to be taken.

He added that the members of the Technical Advisory Committee on COVID-19 have also been invited for the meeting.

Sudhakar also said that he has sought a detailed report on the Omicron variant.

"We will get a clear information on December 1 about how the Omicron behaves after the genomic sequencing. Accordingly we will initiate all measures," he explained.

Underlining the fact that the new variant is visible in at least 12 nations, Sudhakar said the international travellers will be tested carefully and those tested positive will be hospitalised compulsorily.

"We are tracking and closely watching all those who came from South Africa in the past 14 days. We have started tracing and testing their primary and secondary contacts since Saturday," the minister said.

Speaking about Omicron, Sudhakar, who himself is a medical professional, said he has also spoken to his classmate doctors working in South Africa, who told him that the new variant is not as dangerous as the delta variant.

"The satisfying thing I came across after talking to my classmates in South Africa is that this (Omicron variant) spreads rapidly, but it is not as dangerous like Delta.

"People feel nausea and vomiting and sometimes the pulse rate goes up, but loss of taste and smell is not there. There is less hospitalisation because it's intensity is not severe," Sudhakar explained.

To a query on the possibility of a lockdown, Sudhakar said there was no such proposal before the government and there was no need to panic as people have already suffered losses due to the earlier lockdown in terms of loss of lives and livelihood.

According to health department officials, the two persons who flew into Bengaluru from South Africa tested positive for COVID-19 on November 11 and 20. Both were hospitalised, they added.