US backs India in asking Pak to act against terrorism

The United States on Tuesday 'fully' backed India on its demand that Pakistan should act against terrorists operating from sanctuaries on its soil with US Secretary of State John Kerry asserting that his country 'stands in strong partnership with India' against all terrorism. 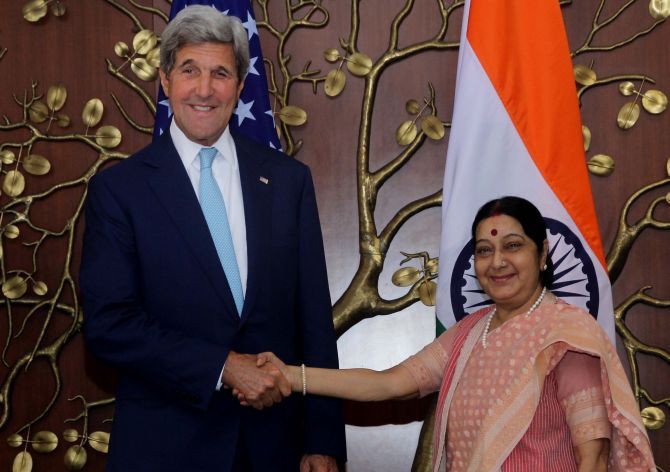 Terrorism, more specifically that emanating from Pakistan, figured prominently in marathon talks between Kerry and External Affairs Minister Sushma Swaraj, who briefed him extensively on the 'continuing problem of cross-border terrorism that India and the larger region face from Pakistan'.

At a joint press conference with Kerry after the 2nd Indo-US Strategic and Commercial Dialogue, Swaraj said, "We reaffirmed the urgent necessity for Pakistan to dismantle safe havens for terrorists and criminal networks including Lashkar-e-Tayyaba, Jaish-e-Mohammad and D Company.

"Secretary Kerry and I also agreed on the need for Pakistan to do more to bring the perpetrators of the 2008 Mumbai and 2016 Pathankot terrorist attacks to justice quickly," she said.

Kerry said he had spoken to Pakistan Prime Minister Nawaz Sharif and Army Chief General Raheel Sharif so that Pakistan deprives any terrorist group of sanctuary.

Swaraj also said that they agreed that nations must not maintain double standards, such as the categorisation of good and bad terrorists, nor must they act as sanctuaries and safe havens for terrorist organisations.

On his part, Kerry said, "I made it very very clear that United States stands in strong partnership with India against all terrorism no matter from where it comes from, no matter what form it takes. As I said there is no good terrorists, bad terrorists. Terrorism is terrorism.

"We stand fully behind the Indian demand that there be justice with respect to the Mumbai attacks, with respect to other. We have had conversation with all of the members of the region frankly about the efforts they need to take to curb terrorism that comes out of their countries.

"That is true of everybody. Anywhere in the world. I think it is crystal clear that US and India are exactly in the similar mind with respect to the issue of terror and the need to not only prevent it but to bring those to justice who perpetrate it."

The two countries also agreed to boost their counter- terrorism cooperation by enhancing intelligence sharing, screening of terrorists, exchange of information on known or suspected terrorists.

They also agreed to continue to work closely to get terrorist entities listed by the UN system, by coordinating the approach to the UN 1267 Committee.

Terming terrorism as a "key challenge to the international community, and the foremost threat to international peace and security", Swaraj noted that there was a "meeting of minds" on this issue between the two sides.

Asserting that they have interacted with Pakistan in one way or the other, Kerry said, "I have recently spoke to the prime minister and General Raheel Sharif regarding the need for Pakistan to deprive any group sanctuaries...

"It is well known that the Haqqani network and others operated out of the western part of the country. LeT, we all know and we all spoken out against had an impact on India, directly.

"It is vital that Pakistan join with other nations in tackling this challenge, and in fairness, in recent weeks and months they have been moving more authoritatively."

Tuesday's Dialogue comes in the backdrop of unrest in Kashmir with India alleging Pakistan's involvement in it.

Apart from counter-terrorism, the two sides during the Dialogue, which was also co-chaired by commerce minister Nirmala Sitharaman and US Secretary of Commerce Penny Pritzker, discussed issues of commercial, regional and international interests.

Asked by an American journalist about the tension between India and Pakistan and when the dialogue between the two will resume, Swaraj made it clear that "terror and talks will not go hand in hand".

She said India remained ready to have talks with Pakistan but there were legitimate expectations that it will act against terror groups which were carrying out attacks against India including the Pathankot one. "And the talks can only resume if these expectations were met," she added.

India and the US also agreed to restart a three-way dialogue with Afghanistan next month on the sidelines of the UN Genreal Assembly in New York and signed an agreement to combat and counter cyber attacks.

Asked if the close consultation with India on Afghanistan under the trilateral framework may result in Pakistan feeling isolated, Kerry said US appreciates India's involvement in the war-torn country and Pakistan will not feel isolated but encouraged and workout a roadmap for itself in that country.

The two sides also reaffirmed pledges to boost cooperation on climate change and clean energy development, including stepping up efforts on the previously agreed construction of six nuclear reactors by the US firm Westinghouse.

"We both agreed that India's enhanced global role is in mutual interest," she said.

US has been playing a lead role in supporting India's bid in the 48-member group and on Tuesday discussion on pushing India's case comes ahead of the next month's meeting between the top disarmament officials of India and China, which had scuttled New Delhi's bid at the Plenary Session of NSG in June.

They also had a detailed exchange of views on climate change and clean energy issues with both the countries affirming high importance to the full implementation of the Paris Agreement.

"We have agreed to scale up our collaboration in clean energy and to quickly operationalise the various initiatives that were announced during Prime Minister's visit to facilitate investments in this sector from US into India. We look forward to working with the US to ensure the success of the International Solar Alliance," Swaraj said.

She also said that they have agreed to work together on the implementation of Agenda 2030, through its 17 Sustainable Developmental Goals.

The SDGs are entirely consistent with many of our Government's flagship domestic initiatives such as Skill India, Make in India and Swachch Bharat.

Given the fact that we account for 1/6th of humanity, success or failure in realising Agenda 2030 or fulfilling the SDGs, will depend on the success achieved in India.

Swaraj also sought Secretary Kerry's support for resolution of long-pending issues of tantalisation and the fee hike for H1B and L1 visa that impact our people-to-people exchanges, which was a vital source of strength for our relationship.

She also said they have decided to widen the consultations to more effectively address the rapidly evolving regional and global situation.

"We will hold consultations on Africa and on multilateral issues within this year. We have also strengthened our cooperation in the area of peacekeeping. In this context, we recently launched the first UN Peacekeeping Course for African partners in New Delhi.

"We have agreed to strengthen our cooperation in the area of maritime security. Our Trilateral with Japan has moved from dialogue into action in key areas of regional connectivity," Swaraj added.