'300 terrorists waiting to infiltrate into India from PoK' 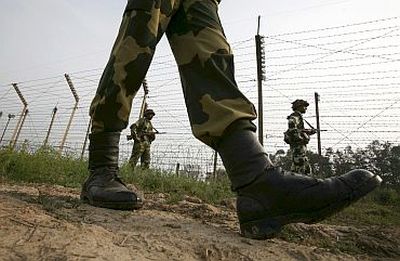 Intelligence agencies have gathered pin-pointed information about the locations of the camps, exact strength of each of the camp and which camp is in operation under direct supervision of which formation of Pakistan Army.

Around 300 terrorists belonging to outfits like Lashkar-e-Tayiba and Jaish-e-Mohammad are waiting for opportunities to sneak into India from Pakistan-occupied Kashmir where 17 terror camps are being run with active support of Pakistan's intelligence agency Inter-Services Intelligence and Army.

This is part of a dossier that was prepared by India to be handed over by National Security Adviser Ajit Doval to his Pakistani counterpart Sartaj Aziz during the now-cancelled talks in New Delhi, government sources said on Monday.

They said intelligence agencies have detailed information about the 17 camps being run by LeT, JeM, Hizbul Mujahideen and a few other groups with active support of ISI and Pakistani Army.

The intelligence agencies have gathered pin-pointed information about the locations of the camps, exact strength of each of the camp and which camp is operation under direct supervision of which formation of Pakistan Army, they said.

Around 300 terrorists, trained in these camps, are ready with arms and ammunition, awaiting for opportunities to infiltrate into Jammu and Kashmir, the sources said, citing the dossier.

India had also prepared a separate dossier on underworld don Dawood Ibrahim, in which it was said that he has nine residences in Pakistan, including one bought near the house of Bilawal Bhutto Zardari, son of former Prime Minister Benazir Bhutto, two years ago.

Dawood, who is known to frequently change his locations, stays in Pakistan, the dossier said, adding the new residence he bought is located at Shireen Jinah Colony near Ziauddin Hospital, Cliffton, Karachi.

"This accommodation was purchased in September, 2013, and is located near the hospital where medical treatment could be provided to Dawood whenever required. This place is close to the residence of Bilawal Bhutto Zardari..," the dossier reads.

"Dawood is known to frequently change his locations and addresses in Pakistan. He has amassed immense property in Pakistan and moves under the protection of Pakistani agencies," the dossier said.