'It indicates the grooming of the party's new leadership.'
'It is also a signal to the states that these ministers represent.' 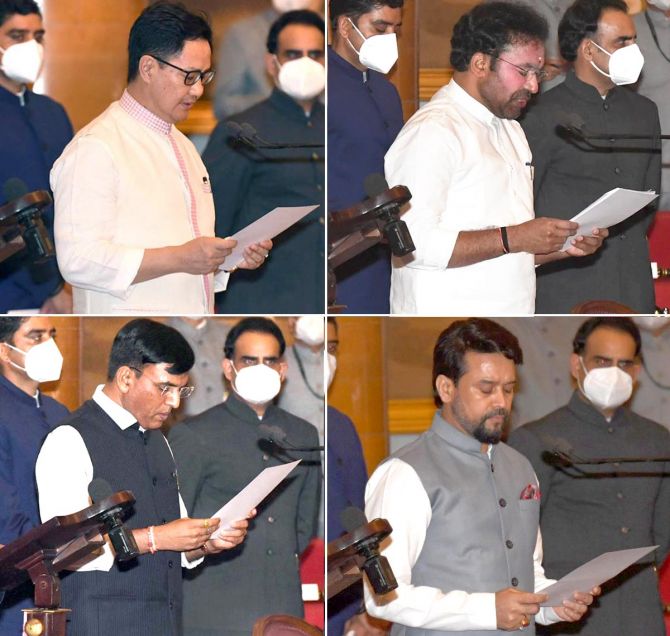 "The ministers of social sector ministries -- Health, Labour, Social Justice, Education -- were dropped and replaced by new ones."

"It tells us that the PM had something in mind going forward and these are the priority areas for the government," Rahul Verma, political analyst and fellow, Centre for Policy Research, tells Rediff.com's Archana Masih.

The context of the Cabinet expansion

36 new ministers joined the Union government taking the number of the Union council of ministers to 77. The Cabinet now has 50% new faces. It is a big overhaul and was due for a long time.

The expansion has been done in the background of a severe second wave of the pandemic, the economic criticism, the political setback in West Bengal and no headway in the south. All these factors made it important for the government needing a reset.

Each Cabinet expansion contains lots of messages. Some ministers are dropped keeping in mind the performance of the ministries, some are retired due to advancing age and some new faces are included with an electoral viewpoint depending on which states are going to poll in the next 6-8 months.

What are the electoral-political signals?

Prime Minister Modi is remaking the BJP. He is creating his own BJP which is very different from the BJP of the 1990-2000s.

The Cabinet includes 27 OBC ministers, 12 scheduled caste ministers and 8 tribal ministers -- roughly 2/3 of the ministers come from the lower castes.

We have seen in 2014 and 2019 election that BJP's social base is expanding in these communities.

The BJP, which in the 1990s was known as the party of the middle classes and upper castes, is slowly changing its social structure. This was visible in the Cabinet expansion.

BJP sees the East as its new territory

Two ministers from West Bengal were dropped -- Babul Supriyo and Debasree Chaudhuri -- and four new faces were inducted from Bengal.

One minister was added from Assam, Odisha, Manipur, Tripura.

The BJP sees the East as its new territory which was not so earlier.

Even though Bengal is not going to the polls for five years, the inclusion of four ministers from the state means that the BJP wants to maintain the momentum it created during the assembly election.

Some ministers who have been promoted are the young faces of the BJP -- Kiren Rijiju, G Kishan Reddy, Mansukh Mandaviya, Anurag Thakur.

These are the new faces to look out for.

It indicates the grooming of the party's new leadership. It is also a signal to the states that these ministers represent -- Reddy for Telangana, Thakur for Himachal Pradesh, Mandaviya for Gujarat, Rijiju for Arunachal Pradesh.

The exit of three senior ministers

We must wait to figure out why Ravi Shankar Prasad and Prakash Javdekar were dropped.

It is likely that there were some expectations the party had of them which were not fulfilled. It may also be because of the controversies that were created between Ravi Shankar Prasad and Twitter.

Dr Harsh Vardhan also courted controversies -- for example, the content of his reply to Dr Manmohan Singh's letter on his concerns for COVID-19.

The new health minister is a trusted lieutenant. He comes from Gujarat. I think the PM wants someone who can deliver in Covid times.

But I would hesitate to comment because they (Ravi Shankar Prasad and Prakash Javadekar) may get accommodated higher up in the party hierarchy. If they are, then it will not see as a punishment.

Since they were Cabinet ministers, they should at least be made general secretary because that's an important post in the BJP.

The priority areas for the government

Forget the faces, look at the ministries -- labour, social justice, education, health. These are all social sector ministries.

Ministers from these social sector ministries were dropped and replaced by new ones. It tells us that the PM had something in mind going forward and these are the priorities areas for the government.

Uttar Pradesh is a priority state for BJP

7 among the 36 new ministers are from UP, which means one in every 5.

UP sends one in every six MPs to the House, so it is not as if UP is getting any disproportionate representation.

Most of the BJP MPs hail from north India. It was also natural that UP was going to have more ministers given the assembly elections are in a few months.

Of 7 new UP ministers -- 3 OBC, 3 SC, 1 upper caste -- there is clear messaging that while keeping its upper caste base intact, the BJP is targeting a coalition of upper castes, OBCs and SC.

Perhaps within the party, there is a reading that the BSP at the moment looks vulnerable and the BJP should continue attacking its base.

All major geographical regions of UP have been represented by these MPs.

The total number of ministers including PM from UP would be 13-14.

Is this final push from the old to the new BJP

It is a natural progression of time. The ministers in Vajapayee's Cabinet in 1999 must already be over 70-75.

If the Congress were to come to power, there would be very few leaders from UPA I in that Cabinet. It is just a natural progression.

Those who were inducted in Vajpayee's time had been in politics from the 1970s; now those who became MPs around 1990-2000s are going to be active.

The young who have inducted into the Cabinet are the ones to look out for.

There were some dissidents in BJP state units -- West Bengal, Rajasthan, Karnataka, Uttarakhand -- this was a chance to cool them down by giving some ministerial positions to MPs from these states. But we did not see that happening.

One message was that we needed a reset. In the next three years with new team there will be a focus on governance.

Two, he is trying to create a social constituency by bringing in a mix of people.