'It was my own decision to resign as governor.'
'I felt the party needed my services and presence during the election.'
'I did not resign to contest the election, but when the party asked me to contest from Thiruvananthapuram, I agreed.' 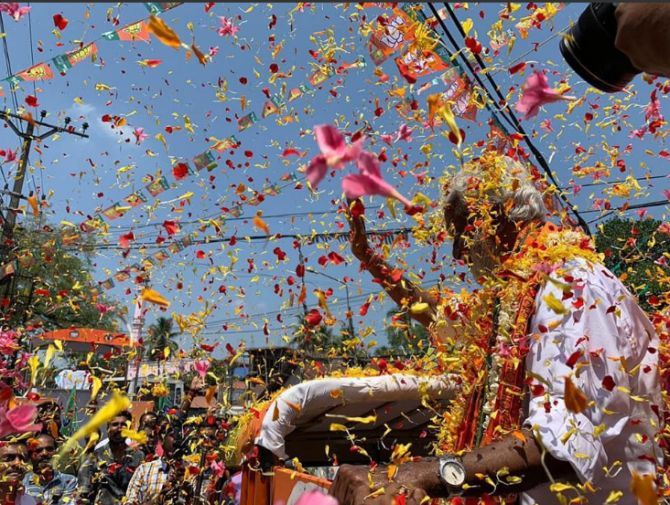 Kummanam Rajasekharan was a Rashtriya Swayamsevak Sangh pracharak till 2015 when he was appointed president of the Bharatiya Janata Party's Kerala unit. He was then sent to Mizoram as governor, a decision the BJP may have regretted when the Sabarimala issue rocked Kerala.

Kummanam had led an agitation in 1982 when the then Congress-led government gave permission to build a church at Nilakkal, which is the entry point to the Sabarimala temple. Sreedharan Pillai, who currently heads the BJP in Kerala, the party's supporters believe, messed up an opportunity to earn political dividends for the BJP from the Sabarimala agitation.

Soon after the election dates were announced, Kummanam resigned as governor to contest the Lok Sabha election from Thiruvananthapuram against Shashi Tharoor, the two-time MP.

"I travelled with Kummanam in his open jeep while he was campaigning in Neyyattinkara to speak to him on the way, but the blaring loudspeaker announcing his arrival made it impossible to have a conversation. He said he would talk to me once he finished the day's campaign," says Shobha Warrier/Rediff.com.

By the time he called it a day it was past 11 pm. As he headed back to his room, Kummanam spoke to her over the phone.

Is Sabarimala the most important issue in the 2019 election in Kerala?

Yes, Sabarimala is one of the most important issues in this election. Of course, development and security are also two major issues.

If you look at the crime rate in Kerala, it is much more than other states.

There are many dimensions to the Sabarimala issue. From protecting religious rights to the right to worship.

First, they ignored the sentiments of the believers and then instead of protecting their beliefs, they protected those who wanted to break the age-old customs.

The government thought by doing so, they were creating a revolution, but what they did was, they hurt the sentiments of all the believers.

Their attempt to start a revolution failed miserably because people did not want it.

And look at what they did last month. After the elections were announced, they sent back the women who went to pray at Sabarimala. Why? Now, they do not want to antagonise the believers.

Are you happy with the way the BJP handled the issue? It is felt the state BJP leadership messed it up.

I am definitely happy with the way the BJP handled the issue.

Many were critical of the comment by state BJP President Sreedharan Pillai that it was a god-sent opportunity for the BJP. Should a political party exploit religious issues?

Every issue is an opportunity for a political party.

I am not talking about the Sabarimala issue alone. Whether it is food prices or unemployment or drought or floods, political parties take up every social issue as an opportunity.

It is the responsibility of all political parties to take up issues that affect and involve people, highlight them and fight for them.

So, there is nothing wrong in the BJP taking up the Sabarimala issue politically.

Do you think the BJP will benefit from the Sabarimala issue? Many people believe that votes against the state government will go to the UDF (Congress-led United Democratic Front).

How can anyone say that the UDF will benefit from the issue? They did not participate in the agitation. They did not issue a single statement on the issue. Except for a dharna here, what did they do? I feel the NDA (the BJP-led National Democratic Alliance) will be benefited.

We were the only people who protested loudly against Section 144 imposed at Sabarimala.

We protested against the Left government's orders forbidding devotees from even chanting 'Swamiye Saranam Ayyappa' in front of the deity.

The UDF just remained silent spectators to all these atrocities against the devotees.

When there was a spontaneous reaction of women from all walks of life, something Kerala had not seen in its recent history, the state government machinery tried to crush the movement by foisting false cases against all those who participated in the agitation.

Opinion polls say the anger against the Left government will go to the UDF...

It is the opinion of the people who go to do the survey and not that of the people of Kerala. I don't think any Keralite would say that the Sabarimala issue would benefit the UDF.

Who do you consider the NDA's real opponent in Kerala?

Both the UDF and the LDF are our opponents as the only aim of both the fronts is to defeat the BJP.

Both the Left and the Congress are supposed to be fighting against each other, but they are not actually. They claim there is no pre-poll arrangement, but the hint they give is that there can be a post-poll arrangement.

Usually politicians become governors after fighting Lok Sabha elections, but you resigned as governor to fight the elections. Did your party president Amit (Anilchandra) Shah ask you to do so?

It was my own decision to resign as governor.

I felt the party needed my services and presence during the election because of the socio-political situation here.

I did not resign to contest the election, but when the party asked me to contest from Thiruvananthapuram, I agreed.

I am bound to do what the party asks me to.