'This is an emotional issue and cannot be resolved by law alone.'
'This can be resolved only by creating trust again.'
'So much bloodletting has taken place, there is no point in going on and on.'
'Let us sit together and negotiate' 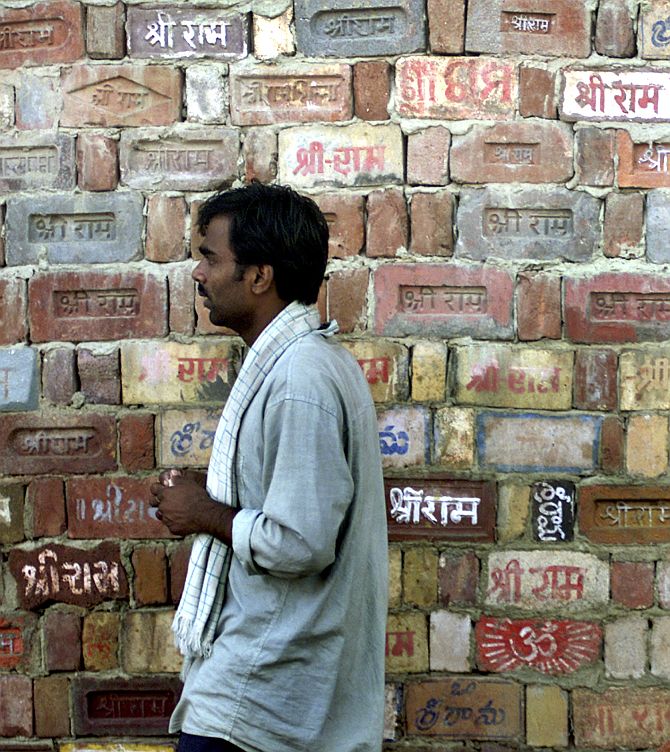 Shahid Siddiqui, former Samajwadi Party member and editor of the Urdu newspaper Nai Duniya, was among the many people involved in the attempt to locate an out-of-court solution to the Babri Masjid-Ram Janambhoomi dispute in the 1990s.

He was also a member of the National Integration Council in which capacity he attended many meetings to find a solution to this decades-old issue.

Following the Supreme Court suggesting that a solution to the dispute be found through negotiations, Siddiqui, below, left, tells Rediff.com's Syed Firdaus Ashraf why the earlier attempts at talks failed.

How do you view the Supreme Court's suggestion for an out of court settlement for the Ram Mandir issue?

Even earlier, a lot of efforts were made and I was part of those efforts to find an out of court solution.

I have always believed that this issue can only be resolved through mutual understanding and amicably.

A court judgment means that one party will win and another party will lose.

So there is no point in going ahead with the court decision.

For example, if the Waqf board representing the Muslims wins this case, then would it be advisable or proper to remove the Ram Mandir which has existed there for so many decades?

If we do that, it will create huge problems in the country.

Similarly, if the Hindus win the case, then the Muslims will feel that they have been cheated and justice was not done to them.

The problem here is that the mosque was demolished on December 6, 1992 after which the negotiations stopped.

So negotiations must be held on mutual trust. 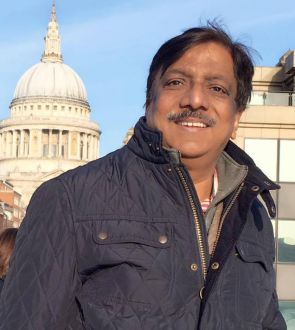 But Muslim groups have stated that they will abide by the court decision whatever it be in this case.

The Babri Masjid Action Committee does not exist anymore and the case has been taken over by the All India Muslim Personal Law Board.

Do you think all Indian Muslims will follow the AIMPLB's decision? It is not possible.

Technically it is a property dispute or a land dispute, over who holds the title to the plot. If the court cannot resolve this, how can others be expected to do so?

There would not have been so many riots and so many deaths over this issue.

Let us be realistic. Only fools make technical arguments to win an argument.

Logic -- not always but sometimes -- is the realm of fools.

Indira Gandhi said she had to introduce the Emergency like a doctor to save the life of a cancer patient and that is why she had to cut the hand off.

But the Emergency is different and cancer is a different issue. You cannot compare cancer and democracy.

So if you go by logic, then logic is an ass sometimes.

Many years ago you were part of a group which tried to find an out of court solution. What was discussed at those meetings?

Local leaders in Ayodhya are ready to go along with the Allahabad high court judgment. It is only the outsiders who are not ready.

From the Muslim side, Syed Shahabuddin, Sulaiman Sait (then MPs), G M Banatwala (the Indian Union Muslim League president) and Salahuddin Owaisi (founder president of the All India Majlis-e-Ittehadul Muslimeen) and I were actively involved in these meetings, even though I was the editor of a newspaper.

I was also a member of the National Integration Council. The first meeting was held in 1990, before L K Advani set out on his Rath Yatra.

A week before the demolition of the Babri Masjid, on November 24, 1992, then prime minister P V Narasimha Rao attended the NIC meeting.

(During the meeting) Muslims came to the point and in fact they had agreed, which S Q R Ilyas (member of the Babri Masjid Action Committee) too said, that except the 'member' (a component of a load-bearing structure) the Muslims had agreed to give up the rest of the place (to build the temple).

Leave the member and at the back side we can build a mosque, they said.

They also said that the other side of the chabootra (a platform which was located outside the mosque) and all other portions should be turned into a huge temple.

But the VHP was not agreeing to the mosque being anywhere near the temple. That is where things stalled.

You mean, the VHP wanted 100 per cent of the mosque's area?

The fight was over the sanctum sanctorum.

For Hindus, the heart of the temple lies in the sanctum sanctorum.

They were asking for that as they said it was at that very spot that Ram Lalla was born.

What was the Muslim objection to this?

The Muslims said that that particular place should not be touched because they were not interested in the four walls of the mosque.

They wanted only that place because the imam was leading the namaaz from that particular spot (the sanctum sanctorum).

In fact, Maulana Ali Miyan (of the Muslim Personal Law Board) too was a part of the meeting as was Maulana Qasmi of the Milli Council.

They also said that a mosque will remain a mosque till doomsday.

Did you not explain that mosques are routinely demolished in Muslim countries to build roads and highways?

I had said at the meeting that we cannot go with the religious traditions of Saudi Arabia. BJP leader Murli Manohar Joshi too mentioned this.

The problem here is that psychologically, Indian Muslims have emerged from Hindu culture and for them the house of God becomes the most pious and holy place, like temples are for Hindus.

How many meetings took place to solve this issue?

When Narasimha Rao became prime minister, he had created an Ayodhya cell in his office.

The whole thing became so politicised. Nobody wanted to look like surrendering anything.

The reason being that they did not want to be seen toeing the line of the opposite party.

And after the Babri Masjid was demolished, to my knowledge, no meetings or negotiations were held.

Did you at any point of time feel that yes, now a solution would be found?

A few meetings were held by C K Jaffer Sharif (railway minister in Rao's Cabinet) in which many Hindus and Muslims met.

Post the demolition, I told Narasimha Rao look, what has happened has happened. Now you can divide the land as the mosque has been pulled down.

On one part you can build a mosque and another part a temple. That could have been an easy solution, but he had his own politics to play.

That very night he (allowed) a temporary temple (to be built). So that solution was also sabotaged.

A small mosque could have been built along with a grand temple, but no serious effort was made, which has led to 100 communal riots all over India.

What must the Muslims now do, according to you?

If I am a politician then I will not close this chapter.
In fact, it will suit a politician to pour more oil into the fire rather than solve the issue.

There are Congressi Muslims, Samajwadi Muslims, even BJP Muslims.

People say Muslims must give up their claim on the Babri Masjid, but how can they give it up?

Can the 19 crore Muslims be called to a ground and gather there to give one opinion?

Some Muslims will support and some will oppose.

The media talks as if Muslims behave as one monolithic group.

Who am I to say what Muslims must do?

What is your own personal opinion?

So much bloodletting has taken place. There is no point in going on and on.

Let us sit together and negotiate.

Let the Muslims get some other benefit, which they must get as citizens of the country.

The local leaders in Ayodhya are ready to go along with the Allahabad high court judgment. It is only the outsiders who are not ready.

So, let us find a way out, find a solution.

The time has come to close this chapter.

Do you think any politician in India has the vision to solve this problem?

If I am a politician and I have to contest elections, then I will look at voters and not at a solution.

If I am a politician, then I will not close this chapter.

In fact, it will suit a politician to pour more oil into the fire rather than solve the issue.

If a solution is to be found, it cannot be (from the) politician.

The problem for the court would be: Who will negotiate? That is the point.

Would be it politicians like (BJP MP Subramanian) Swamy and (MIM MP Asaduddin) Owaisi or some dharmik (religious) leaders of Ayodhya?

Or will it be the same set of people who were there 25 years ago?

No, it won't be the same people.

Most of the people from that generation are dead. Shahabuddin, Syed Sulaiman Sait, Maulana Ali Miyan, Mahant Avaidyanath, Dalmia, Singhal are all dead.

The court will have to find a way after calling all the parties to the dispute.

One party is the Sunni Waqf board of Uttar Pradesh which reports to chief minister, who now is Yogi Adityanath. He is the boss of the Waqf board.