'Today, the Congress is hollow'

'Two years ago I told Sonia Gandhi and Rahul Gandhi that we have traitors in the Congress.' 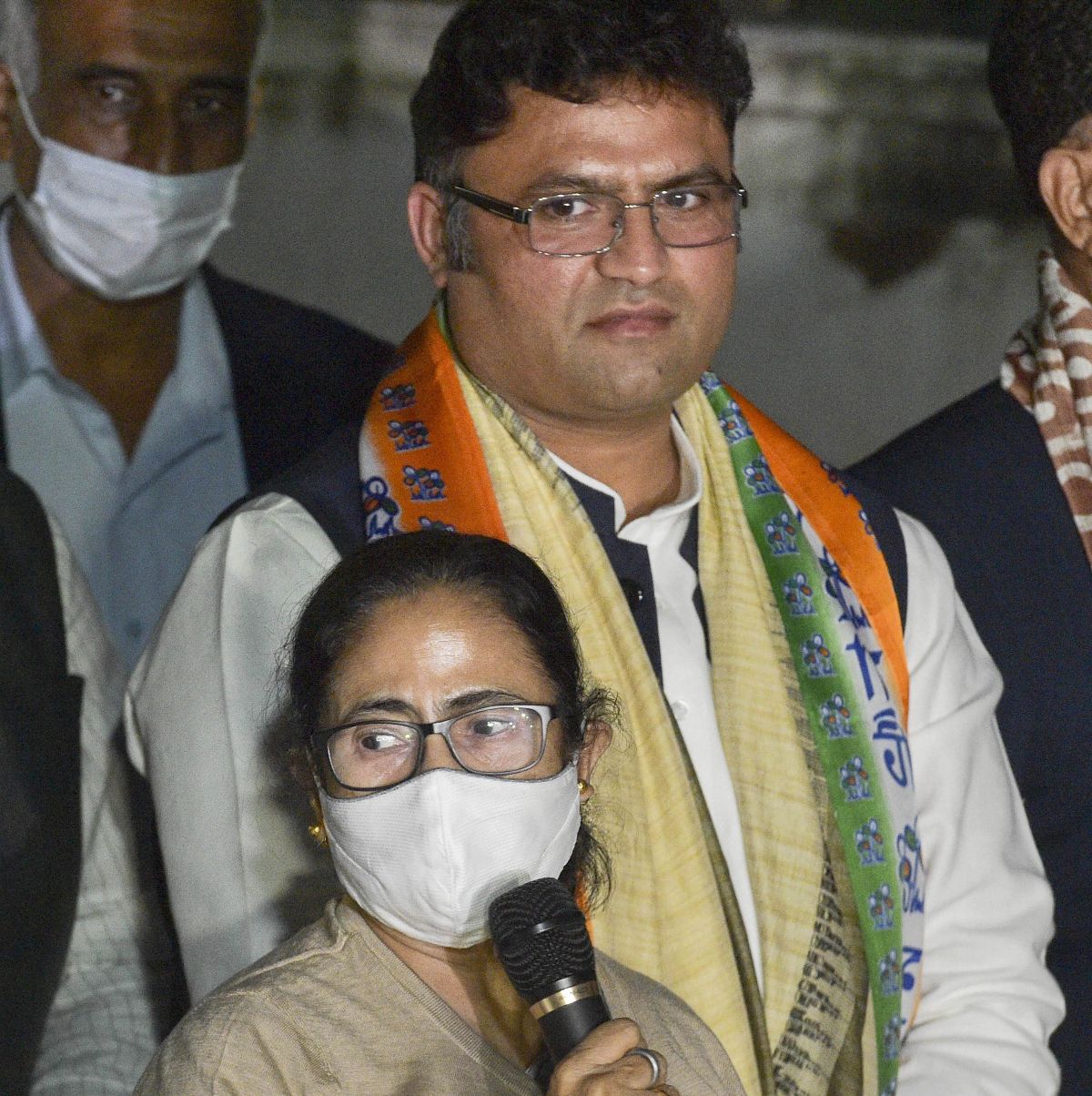 IMAGE: Trinamool Congress supremo Mamata Banerjee talks to the media outside her nephew Abhishek Banerjee's residence in New Delhi, November 23, 2021. Ashok Tanwar, who joined the TMC on Tuesday, can be seen behind her. Photograph: Ravi Choudhary/PTI Photo

On November 23, 2021, the Congress suffered a jolt when Ashok Tanwar, the Congress leader from Haryana who was once considered close to Rahul Gandhi, joined the Trinamool Congress.

Tanwar, who quit the Congress in 2019, was an MP from Sirsa during 2009-2014 and also president of the party's Haryana unit. He quit the Congress days before the Haryana assembly election in October 2019 and launched a party, Apna Bharat Morcha, in February this year.

"The Congress has been captured by people who have no interest in our country. They are in the party only to serve their self-interest," Tanwar tells Syed Firdaus Ashraf/Rediff.comin the first part of an interview.

Why did you quit the Congress earlier, and why did you join the TMC?

Today the country is going through a bad phase.

The BJP (Bharatiya Janata Party) and Congress are destroying our country.

We need an alternative to save our country.

I feel the TMC and Mamata Didi is the only person who can take on the BJP.

Her simplicity and her life struggle are known across the country. She has time and again proved herself in politics.

I feel only Mamata Banerjee can take on Modi in the 2024 elections.

Why are you blaming the Congress for destroying India when it has been in the Opposition for seven years?

They are with the BJP.

Take any state leadership of the Congress. They cannot take on the BJP.

They are only taking on the BJP in those states where regional parties are strong.

Today in Rajasthan, the Congress government is safe because of BJP leader Vasundara Raje.

In Haryana, Congress leaders are scared to go to jail and therefore they are in cahoots with the BJP.

Be it the COVID crisis or repealing of farm laws, Rahul Gandhi is continuously targeting the Narendra Modi government. Isn't he sincere about taking on the BJP?

Two years ago I told Sonia Gandhi and Rahul Gandhi that we have traitors in the Congress party.

At that time the G-23 did not even exist.

You go through my earlier interviews and you will find out what I have been saying about it.

In the past, I have been the Youth Congress president.

I was a leader of the NSUI (the Congress-affiliated National Students Union of India).

I was the AICC (All India Congress Committee) member and also in charge of Gujarat.

On that basis, I had prophesied that this group will finish off the Congress party.

Today, the Congress party is hollow.

It looks good from the outside, but when you go inside there is nothing in the Tughlakabad Fort in Delhi.

The Congress has been captured by people who have no interest in our country.

They are in the party only to serve their self-interest.

In the Congress, there is no value for honesty and hard work.

I came to the Congress because they fought for Independence, but now the fourth generation family leaders of the Congress are sitting and doing nothing in the party.

Are you talking about Rahul Gandhi?

I am not talking about him.

I am talking about other leaders in the Congress.

I am not blaming or naming anyone.

People have to judge themselves.

Mamata and Sonia tried to put up a joint front against the BJP, but it seems like it is failing miserably. Is Rahul Gandhi the reason for it?

This is an internal matter between them, but I feel somewhere arrogance in the Congress party has not gone.

Rahul Gandhi used to say that the Congress had become arrogant when they were ruling India, but this arrogance is still continuing in the minds of all Congressmen even when they are in the opposition.

Even today, these Congressmen feel they will win the elections by doing nothing.

They have dynasty at every level of politics.

If one Congress MLA was elected on the Congress ticket 50 years ago, today his grandson is contesting elections from that same seat.

Where is the scope for outsiders or the new generation who want to work for the Congress party?

The TMC is a regional party, how can you expect it to take on the BJP which is a national party with a presence across all states?

Who knew Modi before he became chief minister of Gujarat?

After he became chief minister, he was a regional leader, he worked there and made efforts to become a national leader.

West Bengal is a state which is double the state of Gujarat.

There is sincerity, therefore I feel she will succeed as the prime minister of India.

You see one sad reality of today's politics.

Why does the BJP only win in places where the Congress is their only opponent?

The BJP is not able to take on regional parties, you know why?

Because the Congress party has lost the willpower to fight the BJP, unlike regional parties who fight tooth and nail against the BJP.

In our country, it is only Mamata Banerjee who can take on the BJP as she has the will to take them on.

What about your state Haryana where the TMC has zero presence? How can you win Lok Sabha or assembly seats from there?

In the last assembly elections the Congress would have won for sure.

But they did not give tickets to good people in collusion with the BJP.

That is the reason I quit the Congress.

We work hard on the ground and the top leadership does not even intervene when others get party tickets to contest elections.

Why would a voter in Haryana vote for Mamata as PM? Your party has no cadre in a state like Haryana.

I have joined the party (TMC) and I have my cadres in every village of Haryana.

We will now invite Mamata Banerjee to come to our state and this will help our party to grow.

Secondly, every person in Haryana knows who Mamata Didi is and what stance she has taken in politics and how she defeated the BJP in West Bengal.

They know she is capable of fighting elections and forming the government.

The BJP had four MLAs before the 2014 Haryana assembly elections and had zero Lok Sabha seats out of 10.

When they can come to power within no time and win 10 out of 10 MP seats, why can't we in the TMC win?

M L Khattar was not known in Haryana. Thanks to Modi, he (Khattar) got a chance to form the government.

See the history of Haryana politics and you will find out how I have taken on the BJP in the state.

I am confident that the TMC will win in Haryana and therefore I have joined the party.