'Both Pavan Varma and Prashant Kishor questioned the party president in a public forum.'
'That is why we had to show them the door.' 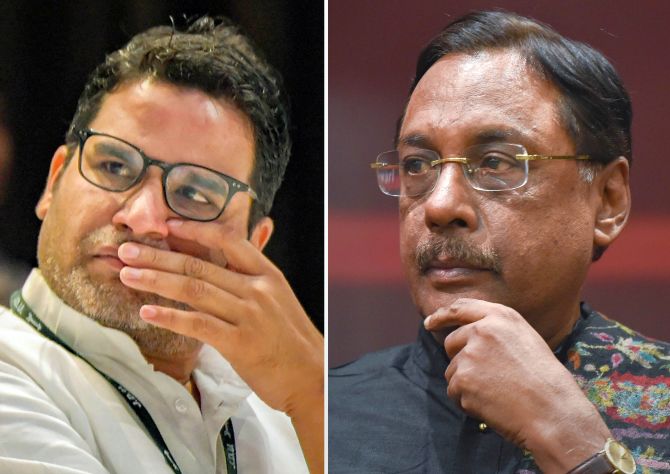 The first sentence of K C Tyagi's press release issued on Wednesday to declare the dismissals of Janata Dal-United vice-president Prashant Kishor and spokesman Pavan Varma from the JD-U read like the bottom line: 'Party's decisions, discipline and loyalty for the leadership is the fundamental requirement.'

Clearly, Pavan Varma and Prashant Kishor were, according to the JD-U, found wanting against all the three parameters.

Both leaders had called out Bihar Chief Minister Nitish Kumar over his support to the discriminatory Citizenship (Amendment) Act.

Over the past few days, the acrimony between Nitish Kumar and the duo grew worse, with Prashant Kishor accusing Kumar of lying about how the former was inducted into the JD-U.

What is the reason behind the dismissals of Pavan Varma and Prashant Kishor?

For the past few days, both Pavan Varmaji and Prashant Kishor have been making objectionable comments against our party president Nitish Kumar.

Yesterday, Prashant Kishor wrote, 'Aur kahan tak giro gey? (How low will you fall?)' Any party member using such language against our president is objectionable and unwanted. Therefore, we had to take this decision.

That was Prashant Kishor, but what about Pavan Varma?

He too was continuously tweeting against Nitish Kumar. He also challenged the position of Nitish Kumar as party president in his tweets. He did not follow party rules.

Additionally, it was not good for Pavanji to write such tweets. So, we took disciplinary action against him and therefore, the party president sacked both of them.

But issues arose between the three men because of the difference in stance on the Citizenship (Amendment) Act and the National Register of Citizens. It is not clear where Nitish Kumar stands on these issues.

The Janata Dal-United is against the National Register of Citizens. In Bihar, there is no way this rule will come into effect.

As far as the National Population Register is concerned, we do not believe the questions asked are appropriate.

There is no point asking people about their parents's and grandparents's birth place. We have also raised this point to the (Modi) government.

And what about the CAA?

Congress leaders like Kapil Sibal and Abhishek Manu Singhvi have said it is important for states to implement these laws and unki majboori hai (the states are helpless).

Knowing this very well, both Pavan Varma and Prashant Kishor questioned the party president in a public forum. That is why we had to show them the door.

But the CAA excludes Muslims. Article 14 of the Constitution clearly says no person will be discriminated on the basis of her or his religion within the boundaries of India. So how come your party agreed to this?

We have clearly said if the NRC is not there, then the CAA will not harm anyone.

We said in this bill they could have avoided the words 'religious minorities'. We did not agree with them.

But the CAA goes against the Constitution.

Now this has become an Act, but we do stand by the people who have the right to protest.

Your party was known to be secular; your leaders were followers of Ram Manohar Lohia and Jayaprakash Narayan. There are now doubts about the JD-U's secular credentials after your party voted for the CAA in Parliament.

During (then prime minister) V P Singh's time we (JD-U leaders like Nitish Kumar were then part of the Janata Dal) lost our government on the issue of secularism. So we do not need any certificate from anyone on secularism.

We are secular, Socialist on an international platform against capitalism.

Sections of Indian society are very upset with the CAA, NPR, NRC. As an ally of the Bharatiya Janata Party, can you not speak to the prime minister on this issue?

We are a part of the NDA (National Democratic Alliance). And when we have accepted PM Modi as leader of the NDA, then how can we comment on him?

Whatever issues are being raised during the Delhi election campaign, we do not agree. Votes should be asked on good work, and not on the Hindu-Muslim question.

In Bihar, we ask for votes only on our good work.

In Delhi you were given only two seats by the BJP and that is one of the reasons Pavan Varma was upset.

Last time when we contested elections, our party broke up. So we got weak in Delhi (laughs).

Many constituents of the NDA have quit the alliance, but the JD-U is still going strong in the NDA.

The JD-U cannot go and become a slave of Sonia Gandhi's party. This is a big problem for all Socialist and secular regional parties. We were always a secular party and a part of a grand secular alliance. Be it at the time of V P Singh or Jayaprakash Narayan.

If you accept (Rashtriya Janata Dal supremo) Lalu Prasad Yadav as leader of the secular front, then you have to go to jail with him (Lalu Yadav has been sentenced to a prison term for corruption).

Could you not pick up the phone, speak to Pavan Varma and sort out the problem?

I feel sorry for Pavanji that we have parted ways.

Do you feel the exit of these leaders from the JD-U will affect the party in this year's Bihar assembly election?

Nitish Kumar is a big winning factor in Bihar.

If he goes with the BJP, only then it can form the government.

If he goes with the Congress and RJD, then its government will be formed.