'In 1997 Mamata wanted the Congress in alliance with the BJP in West Bengal against the Left Front government.'
'Pranab Mukherjee opposed it, stating it would amount to compromising on secularism.'
'In 2021, Mamata defeats the BJP and becomes a champion of secularism.' 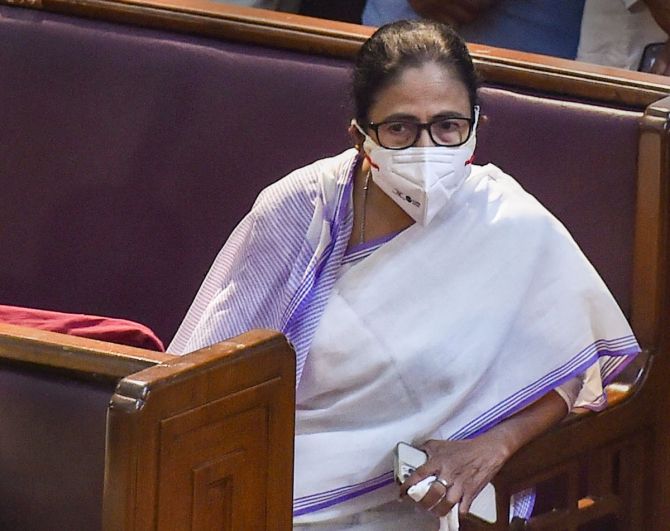 The worst loser in the five-state assembly elections, results of which were announced on May 2, was the Congress party.

To be fair, it was not in power in any of the five states.

In Kerala, the Congress-led United Democratic Front was expected to replace the Left Democratic Front government, as has been the pattern in the state every five years. But that was not to be as the LDF stormed to power.

In Bengal, its alliance with the Left and the Indian Secular Front was expected to put up a semblance of a fight, but it found itself squeezed out between the Bharatiya Janata Party and the Trinamool Congress.

In Assam, its alliance with the All India United Democratic Front of Badruddin Ajmal was expected to challenge the BJP, but that too did not happen.

Puducherry had a Congress government before the election and hence it was felt that its alliance with the Dravida Munnetra Kazhagam would help it return to power, but that too did not happen.

It was only in Tamil Nadu that that the Congress, which had been allotted 25 seats by the DMK, did well, winning 18, and is expected to join the government.

Congress leader Rahul Gandhi, the face of the party, campaigned actively in Kerala and Assam, but to no avail.

The Congress's poor show comes at a time when there have been noises within the party that a new Congress president should be elected post the assembly elections.

Rasheed Kidwai, veteran Congress watcher and author of 24 Akbar Road and Sonia -- A Biography, tells Syed Firdaus Ashraf/Rediff.com, "If the BJP had won Bengal, then the Congress would have faced a revolt or would have come into crisis."

There was a Hindi song trending on social media, Begani Shaadi Mein Abdullah Deewana, referring to the Congress celebrating not their win, but the BJP's defeat in Bengal.

We have to be pragmatic. It is always nice to take pot shots (at your opponents) as politics works on electoral success and failure. Politics works on the dictum my enemy's enemy is my friend. There is an Arabic proverb too, me and my brother against my cousin. Me and my cousin against a stranger. That explains the glee in the Congress.

There was an impression that brand Modi was invincible. Be there any organisational network, state leadership or anything like that, brand Modi could overcome all that.

West Bengal was a test ground for that because Tripura, where the BJP won, is a very small state.

In Bengal too, the BJP didn't have big ground level support and, of course, 77 seats is a very good number for the BJP, but there is no silver medal in politics.

And if they had won Bengal, then next would have been Tamil Nadu and Kerala. There would be a pan-Indian one-party rule. So, there is a sense of relief in the Congress.

More importantly, Congressmen are looking at these results for some kind of United Progressive Alliance, a coalition against Modi. They know politics is about pragmatism and politicians are a very pragmatic entity.

They realise the Congress alone cannot defeat brand Modi or the BJP, but they will need a broad-based alliance which has to be a success story.

After Bihar in the 2015 assembly election there was an idea of this kind of an alliance, but Nitish Kumar went to the BJP fold and that the was end of it.

Before the 2019 election, the Congress did try to form an alliance with regional parties against Modi but they failed, isn't it?

They lost because they did not have a success story to tell. That strategy also needs to be finetuned.

Politics is not mathematics.

It leads to other kinds of problems and therefore the alliance between the SP and BSP did not click in 2019.

The problem with this strategy is, who will be the leader?

But from the Congress side Rahul Gandhi has failed consistently. He failed in Assam and Kerala too this time.

Sonia-Rahul-Priyanka are collectively seen as leaders of the Congress party. They are struggling and the roadmap is problematic but they are not seen as the future prime minister of India. That is the important distinction I am making. As I told you, politicians believe in realism.

What you are saying is not correct. The issue is packaging a narrative. And the narrative has been set up that Congress and Rahul Gandhi are failing without taking note that a member of the Nehru-Gandhi family has not been a prime minister of India since 1989 and that is for the last 32 years.

At the same time the relevance of 10 Janpath has not gone away and that is to their credit.

If all like-minded parties have to come together, then the Congress will have to act like glue. This, Sonia Gandhi can do better than Sharad Pawar.

Besides his age, he is a small player in Maharashtra. The Congress has more members of Parliament and MLAs across India than his party. It is still a pan-Indian party.

If the Nehru-Gandhi family don’t become PM then everybody is open to the idea of an alliance with the Congress party with functional relations. This is all difficult to achieve when the NDA with the BJP at its helm is marching ahead.

The situation is similar to that of Indira Gandhi’s times. She was all powerful and the combined opposition, left and right, came together to trap Indira and they finally succeeded only in 1977. This time, due to mishandling of Covid-19 situation in India and crisis of oxygen supply, there is a question mark now on PM Modi’s abilities.

The whole thing ‘Modi hai toh mumkin hai’ belief stands diminished because of the magnitude of the Covid-19 crisis.

People are blaming states but the Centre is also responsible for the crisis.

Here you can give credit to Rahul Gandhi because he sounded the early warnings about the Covid-19 situation even though the government ignored him. Still, he is not gaining popularity among voters.

There is a need for somebody to make the right kind of noise in matters of public health, governance, economy, and national security. Here the Congress has all the right kind of speakers in their party compared to any other regional party of India. They have a galaxy of leaders. Like Manmohan Singh speaking on economics or for that matter Salman Khurshid, who has his domain area of law and international relations.

Congress party leaders have their domain areas. Congress with diminishing returns has the kind of ability to deliver punches to Modi and the NDA as compared to Shiv Sena or TMC or DMK.

Politics is a complex game and therefore disquiet against Rahul has receded within the Congress party as he made the right kind of noises over Covid at the right time.

They know that they cannot speak against him now as Modi is on a slippery wicket with the defeat in the West Bengal election and the handling of Covid situation in the country. So, there is a need to push an alternative.

But what will be its shape and form now is a very hazy picture. And politicians are very pragmatic as I said, so some kind of opportunity and window of hope (will come).

The next destination after West Bengal is the Uttar Pradesh election, which is next year.

What happened to the G-23 rebel group in Congress that stood against Rahul Gandhi? Everything has been forgotten.

Nothing has been forgotten.

First, the COVID-19 surge has happened, so party elections are unlikely.

Secondly, both sides understand the futility of it. What good will it do?

Suppose, for sake of argument, internal democracy in the party is restored, will it then translate into electoral success?

Kerala is very important where the party organisation had leaders at all levels. Rahul Gandhi went and campaigned there. He drew crowds and struck a rapport and yet the outcome was not desirable.

But Rahul Gandhi never gets blamed for defeats, be it Assam or Kerala.

In Assam, Chhattisgarh Chief Minister Bhupesh Baghel was leading the campaign for the Congress.

In Bengal, Rahul Gandhi did piecemeal strategy by sacrificing the party's interests.

There were different templates, but nothing worked.

In terms of efforts, Rahul and Priyanka Gandhi made 100 percent effort. Be it Tamil Nadu, Assam or Kerala and leaving Bengal for the time being. But it didn't click.

Don't you feel people are done with the Gandhi family? They don't want them.

I think it is a very fashionable, elitist and somewhat inaccurate assessment.

Simply because those who work in an organisation know the limitations, and withdrawal is not an option.

They know that the Gandhis are capable of bring them the fruits of power whenever the opportunity arises.

Like it happened in Maharashtra, where Sonia Gandhi compromised her personal pride and ideology and tied up with Uddhav Thackeray to bring the Congress in power.

The same thing happened in Jharkhand where the Congress tied up with Hemant Soren of the JMM (Jharkhand Multi Morcha) and formed the government.

Therefore, Congressmen know that the Gandhis will keep the Congress together and play a big role in any kind of formation that will emerge against Modi or the BJP.

The Bengal victory of Mamata Banerjee is therefore a very important landmark in politics.

If the BJP had won Bengal, then the Congress would have faced a revolt or would have come into crisis.

It will not happen now because there is a hope now that by 2024 Modi and the BJP can be defeated.

Maybe this is an exaggerated statement.

It is wishful thinking, but politics is all about living to fight another day.

But the Congress is routed whenever it takes on the BJP.

If you see the 2017 assembly elections of Gujarat, the Congress fought very well against the BJP and came close to victory which they could have done if they had some big leader.

They came to power in 2018 in Madhya Pradesh, Chhattisgarh and Rajasthan.

In Punjab and Himachal Pradesh, the Congress now have a chance, but they do not have a chance to get 200-plus seats in the Lok Sabha.

It is a question of reorienting yourself. Our society is not static, but dynamic. Changes keep happening.

Very few people today are aware why Mamata Banerjee quit the Congress in 1997 when Sitaram Kesri was president of the party.

Mamata wanted the Congress in alliance with the BJP in West Bengal against the Left Front government. Pranab Mukherjee opposed it then, stating it would amount to compromising on the Nehruvian idea of secularism.

In 2021, Mamata defeats the BJP and becomes a champion of secularism. This is the irony.

The Congress stands demolished today in West Bengal. The Left has come to zero numbers.

The Congress cannot be a prisoner of the past and not reinvent itself.

What the Congress is lacking today is ideology flexibility and move with the times.

Look at Arvind Kejriwal, he too did the same.

Though the Congress also did it, as they now have an alliance with the Shiv Sena in Maharashtra, which is a living testimony of it.