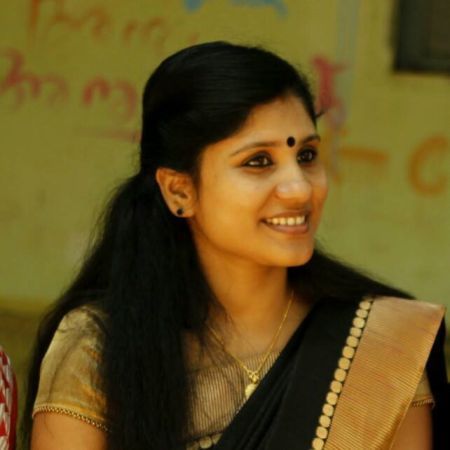 'The beef fest is about an individual's freedom to wear what he wants and eat what he wants. The students were protesting against the State interfering with their personal liberties.'

'Everybody has the right to air his or her opinion and lead a life they want. Nobody has any right to put restrictions on others. What we need is tolerance, but what we see is intolerance.'

Deepa Nisanth, a lecturer who backed Kerala's beef fest, on why she supported the students in their protest.

Deepa Nisanth, 34, a Malayalam lecturer at the Sree Kerala Varma College in Trissur, suddenly became a celebrity not only in her state but nationally too for the stand she took in supporting the beef fest organised by some students of the college. It was organised as a protest against what happened in Dadri, Uttar Pradesh.

Her Facebook post supporting the students angered right-wing activists and they lodged a complaint against her to the Kochi Devaswom Board that manages the college. Though the board initiated action against the lecturer, the overwhelming support for her in social media perhaps made the authorities not to take any action against her.

Kerala has not seen social media rising to support an individual in such a way.

Deepa Nisanth tells Shobha Warrier/Rediff.com why she decided to support the beef fest.

The Devasom Board has decided against taking any action against you. Do you consider it as the victory of faceless voices in social media?

There is no doubt about it. When I took the decision to support the beef fest, there was a lot of pressure on me. I must say with all fairness that the board directly or indirectly never asked me to give any explanation on the stand I took on this issue.

Now, the allegation by the Janmabhumi newspaper against me is that I had paid a bribe of Rs 25 lakh to get this job, but let me say honestly that I didn't have to pay a single paisa to get this job.

It was purely on merit that I got the job as a Malayalam lecturer in this college in 2012 where I was also a student for seven years.

What gladdened me was I didn't have to say a single word against all these allegations. My students and thousands of others came in support of me with all the necessary evidence.

Were you politically active as a student?

Not at all. Those who studied with me here during my college days would vouch for that. Though my husband was an active member of the Congress' student wing, I was a silent supporter of Left ideology.

Did you ever participate in SFI (the Student Federation of India, the Communist Party of India-Marxist's student wing) activities?

I never participated in any SFI activities.

It is not that I didn't have any political ideology; I do and that's very personal. I believed in Left ideology, but today, I don't think those who support the ideology follow its good aspects in the right spirit.

When the students of your college decided to have a beef fest, did they discuss it with you?

No, there was no need for them to discuss it with me. In fact, I was on university exam duty that day. But some newspapers wrote that I was with the students and ate beef with them in support of the fest. It is wrong.

As I was about to go to the exam hall, another teacher told me that some students were organising a beef fest in the college. By then, clashes had started between the students, Suddenly, Vivek, the ABVP (Akhil Bharatiya Vidyathi Parishad, the Bharatiya Janata Party's student wing) joint secretary came rushing to the office room.

Seeing the panic on his face, I caught hold of his hands and asked him what happened. He told me that Kinil (an SFI student) was attacked. But I couldn't remain with him for long as I had exam duty.

I have to say something here. Many people tried hard to make Vivek lodge a complaint against me saying I tried to divide students on the lines of political ideology. But they could not make him do that till now. On the other hand, he was the boy who spoke for me to many people including the principal.

I am also the financial advisor of the students union. Naturally, I have to work closely with the students union, which is run by the SFI now. This might have given the impression that I knew about the beef fest beforehand, but I had no idea at all.

More than the beef fest, your supporting it became a huge issue...

For the first time in my life, I found that there were so many people in our society who were ready to spread false news about you.

The principal of your college says the college never permitted non-vegetarian food on the campus, as there is a temple inside. Do you support the SFI students conducting a beef fest inside the campus?

I was a student here for seven years and I have been a lecturer for the last three years. I have always had non-vegetarian food here and I have seen others having it too.

What I supported was the symbolic protest our students organised in the college. We need not even talk about whether beef should be allowed inside the campus or not. That is not the issue at all; the issue is the protest against what happened at Dadri and a person's freedom to eat what he wants.

In a country where a person's life has less value than that of an animal, it is not by lighting candles that we should protest.

If the protest is symbolic, what difference does it make whether you light a candle or conduct a beef fest?

It is about an individual's freedom to wear what he wants and eat what he wants. The students were protesting against the State interfering with their personal liberties, but what saddened me was the skirmish that happened after that and a student getting injured.

If I had participated in the beef fest and eaten beef there, I would have admitted it courageously. I have been accused of doing something, which I never did. But I support the beef fest.

Another criticism is that when Kerala is one state where Hindus eat beef, what's the need to have such a beef fest and create violence?

My question is why should there be violence in such a state? When all the Hindus eat beef, who is indulging in violence at the beef fests on the campuses?

The beef fest is a just a symbolic act and not only me, many people in Kerala support this.

When I support the beef fest, I am also against some students attacking Rahul Easwar and smashing his car when he went to one college. Just like we have the right to air our views, he also has the right to air his views. Only then will we have a healthy democracy.

Many writers including Shashi Deshpande, Sara Joseph etc have returned their Sahitya Akademi Awards in protest against what is happening in the country. As a politically aware young woman, how do you react to the current developments?

Everybody has the right to air his or her opinion and lead a life they want. Nobody has any right to put restrictions on others.

What we need is tolerance, but what we see is intolerance.

A college campus is the place where opinions are shaped, but most of the campuses are becoming indifferent to the world outside. It shouldn't be so.

Many people look at what happened at the Kerala Varma College as something shameful, but I look at it as the vibrancy of youth. This protest was one of the proudest moments in the history of the college.

Do you feel you were attacked as you took a stand on this issue while many others chose to remain silent?

Yes. The others also many have their own opinion, but I chose to air my opinion; that is supporting the beef fest. Many people asked me to apologise and withdraw my support, but I refused to do so.

Now you are perceived as a supporter of the Left.

The end result is the victory of society and the stand we took, and not a personal victory of mine.