'Result of one election can never be counted as final' 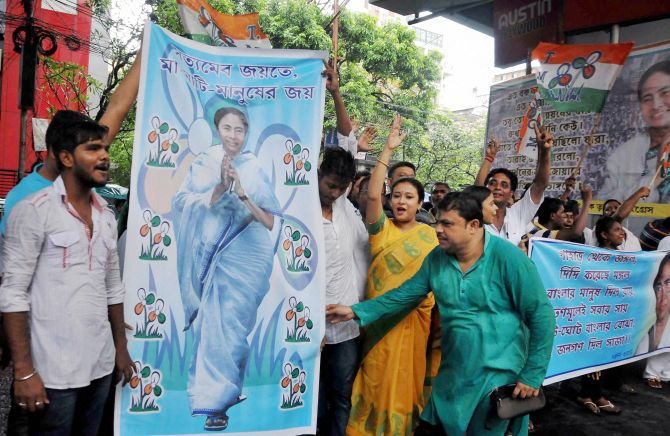 As the Trinamool Congress set for a second term with an enhanced majority, political economist Jayanta Roy Chowdhury said that people have accepted corruption as a new normal.

However, despite the dismal show of the Left Front this time, Chowdhury does not think it is the end of the road for the red brigade.

Chowdhury describes the political scenario in West Bengal to Indrani Roy/Rediff.com while analysing the election results.

Did you expect such a huge win for the Trinamool Congress?

No one had predicted such a huge win. I had expected the TMC to get as many as 180 seats. (Laughs) I never expected this result.

What led to the TMC sweep?

I think while the Left loyalists voted for their party, the Congress supporters rejected the Left-Congress (alliance) and the Congress votes possibly got transferred to the TMC.

Do you mean people rejected this alliance?

Yes, to a large extent.

I also think the Left Front failed to take advantage of the floating votes.

Prior to the last Lok Sabha election, there was the Saradha (scam) issue and this year, the Narada sting surfaced. In both cases, allegations were raised against prominent TMC leaders. But none of these issues affected the party's vote banks.

I think people are no longer considering corruption a serious issue. Rather, people have accepted it as the new normal.

This is total reversal of the Bengali psyche. It seems materialism has overtaken the Bengali mindset that has always discarded flashy lifestyle.

(Pauses) Perhaps, corruption is no longer looked down upon by the people.

A section of the media opined that the Congress and the Left were rather late in announcing their alliance. What’s your opinion?

I think people simply did not like two parties that were poles apart politically and otherwise coming together. As a result, a huge section of Congress votes went to the TMC.

Do you think people lapped up the doles that Mamata Banerjee offered them?

Yes. Not only doles, I think the TMC as a party did satisfy the rural population by providing a lot of jobs in the villages through Mahatma Gandhi National Rural Employment Guarantee Act; by offering rice at Rs 2 per kilogram; by donating cycles and also through various other social development schemes like Kanyashree etc.

There is no doubt that (Mamata) Banerjee has been able to strike the right chord with the people of Bengal.

And this is exactly why the rural and urban lower middle class remained loyal to the TMC.

What is your reaction to the increase in Bharatiya Janata Party vote share?

The BJP got about 10.3% votes this time. Does this mean communalism is raising its head in the state?

This is a point to ponder.

Moreover, as we all know, Left liberals had been ruling the roost in Bengal for years.

With the rise of the TMC and increase in the BJP's vote share, the intellectual aspect will shrink in space making room for right wing thought process.

Is it the end of the road for the Left Front?

Not at all. Both the Left and the Congress have rich history and deep rooted political ideology. Result of one election can never be counted as final.

What should the Left do?

The Left needs to introspect and work hard to reach the masses.