'These protests are not just about the CAA. It is against allowing fascism and religious discrimination to creep into our legal system.'

Chennai-based activist and lawyer Gayatri Khandhadai has some hard-hitting questions for the government.

"Who I am? A passport document, an Aadhaar document? Is that all I am?"

"If my voter ID is not proof of my citizenship, if it is not valid, then how is my vote, which I gave using this ID, through which you became the government, valid?"

"Are millions of Indians giving up their jobs, their liberty, looking after their children, getting locked up, missing college, getting beaten black and blue for nothing?"

She is one of the voices behind the kolam anti-CAA protest that has spread across Tamil Nadu and has lent her voice to the Citizens Against CAA, a informal Facebook collaboration of like-minded individuals.

While she feels the country is going through an "undeclared Emergency", she tells Savera R Someshwar/Rediff.com that one should not give up hope.

What the BJP and the central government did is a secondary problem.

Our primary problem is with our ruling government, the AIADMK, which has betrayed the Tamil people by voting in favour of the CAA.

There were 13 Tamil Nadu MPs (in the Rajya Sabha) who voted in favour of an unconstitutional piece of legislation; they didn't care about what the Tamil people feel.

If they had not voted in favour, it is likely the CAA wouldn't have passed.

Now the AIADMK needs to come onto the streets and answer us.

With the Opposition political parties, including leaders like the DMK's M K Stalin and the MDMK's Vaiko supporting the kolam protest, are you worried about your protest getting politicised?

Here is the thing.

Every act of dissent is deeply personal and political. In fact, those who say they want to be objective are political.

Those who are silent are also political.

When you choose not to raise your voice against violence like this, you are siding with the oppressor. That is your politics and you are entitled to it.

So there's no question of this protest getting politicised.

I think all political parties should be on the street because this affects all of us.

The NRC (National Register of Citizens) essentially reduces me to a document.

Is that who I am? A passport document, an Aadhaar document? Is that all I am?

If my voter ID is not proof of my citizenship, if it is not valid, then how is my vote, which I gave using this ID, through which you became the government, valid?

If my citizenship legitimacy is questioned, I question your legitimacy to rule over us.

In fact, if there are leaders within the AIADMK who are regretful of their actions, we will meet them too.

I believe in second chances.

I don't think the people in the BJP are beyond repair. It's possible that they are misguided.

If they're able to see why these are fascist policies, I'll engage with them too.

We've created a culture where engaging in political discourse is seen as some sort of sin. We can't go on with this attitude.

Many people feel what's happening throughout India now feels like an awakening.

Most of the people we know are in their 30s and 40s. For them, this feels like a freedom struggle.

We have not seen protests at this scale in the last 30 years. The last time this happened was during the Emergency and I feel we are facing an undeclared Emergency now.

The silver lining at the end of all of this is quite simple. By clamping down on the kolam protests, the Tamil Nadu police have essentially ensured that, throughout India, people are drawing kolams.

Even abroad, people have done it.

The Tamil Nadu police have basically made this protest viral.

It even inspired the BJP and the AIADMK to hold a counter-kolam protest.

Though it didn't work, our response was simple.

You learnt fascism from Germany; drawing kolams is something you can learn from Indians. 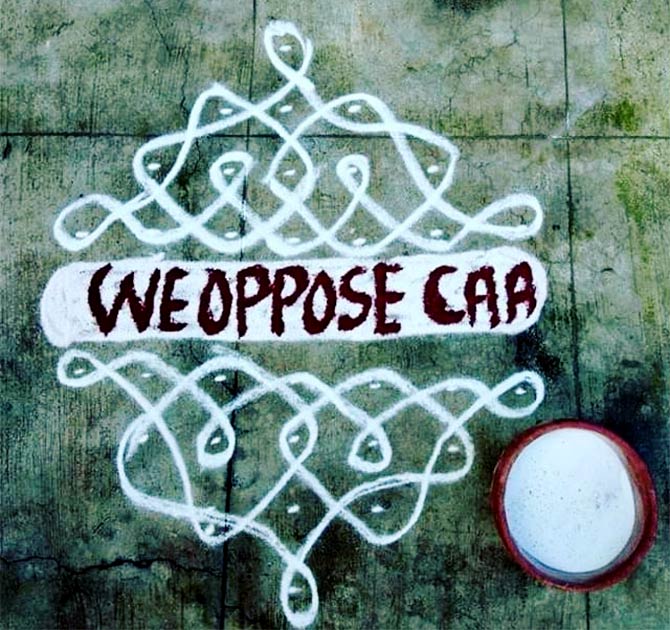 Do you foresee violent CAA protests in Tamil Nadu?

The thing is, despite what the commissioner has done, despite how the police have been behaving, I still hold hope for the Tamil Nadu police because I don't think it is a force of goons like Delhi or UP.

It is a seasoned force. But that does not mean it is not repressive.

By denying us permission to protest, what they're essentially doing is endangering us.

The job of the police is to facilitate peaceful protests. You can't just not apply your mind! You can't deny permission for all protests and think you're doing your job well.

The police commissioner has alleged you are associated with Arappor Iyakkam. Can you explain what this organisation does and why he is raising a red flag about your being associated with it?

This is a crazy allegation.

The Arappor organisation basically works with right to information and exposes corruption.

Due to a recent corruption scandal they exposed, they were issued multiple FIRs.

What the police are trying to do is to link me to all these organisations that have FIRs against them, thereby giving the impression that I am in the company of criminals.

If the commissioner is making an allegation that I am a member, it shows the thoroughness of their investigation.

Earlier in my career, I assisted the UN in investigating how war crimes took place in Sri Lanka. Does that mean I have LTTE links?

There's got to be a limit to how silly we get with these things.

Basically, they are just trying to intimidate us.

When we did the kolams, AIADMK minister Thiru K Pandiarajan said none of us looked like women from good families.

When this didn't work, they said we have been set up by the Opposition parties. That didn't work either.

So they tried other kinds of intimidation. They tried to put us in detention. But they could not stop us.

The only way to distract people from the CAA is to create a silly, prime time controversy like this. Now, that has also backfired.

Let's see what they come up with next.

Can you explain the work you do and if it impacts on your protest against the CAA and the NRC?

This whole experience has actually been cathartic because my conviction to focus full time on human rights was the result of a case I was part of in 2009, along with a big team of lawyers (13 lawyers were arrested in connection with an attack on Subramanian Swamy in the Madras high court, leading to a bloody confrontation between the police and the lawyers; Justice A C Arumugaperumal Adityan was also injured).

It was an unforgettable day.

The present commissioner was an accused in that case and the Madras high court ordered his suspension.

Since I started practising in 2008, I have focused on human rights. As a result, I look at all issues from a rights based perspective. Which is why I cannot have a jingoistic outlook about the CAA.

When I look at the CAA from a rights-based perspective, it is violative of Article 14, which ensures right to equality and freedom from discrimination.

What's your next course of action?

My deep sense is that these protests are not just about the CAA. It is against allowing fascism and religious discrimination to creep into our legal system.

It might seem like exaggeration or fearmongering but, today, if I allow you to exclude my Muslim brethren from whatever entitlement is available, tomorrow you will say they cannot enter certain schools or are not entitled to certain positions.

If I allow this piece of law to go unchallenged, I am potentially making way for more fascism to turn into laws and policies.

As far as our legal strategy goes, we will challenge this whole practice of not allowing us to protest without prior written permission.

Then, basically, I have to be dependent on these political parties and NGOs to organise a protest: I can't just organise a protest freely because, as an individual citizen, you are going to bury me in paperwork.

I'm planning to help whoever is ready to challenge the Madras Police Act. 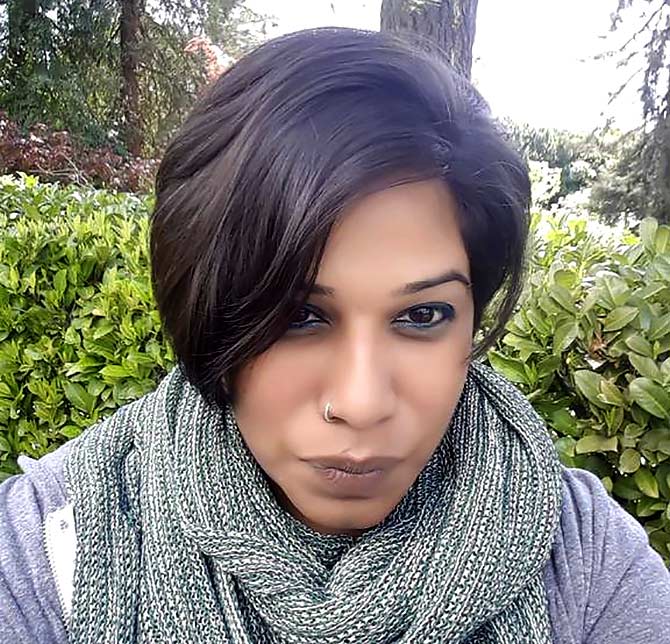 One of the main arguments from CAA supporters is that those who are protesting against the CAA haven't taken the trouble to read the provisions of the Act. As a lawyer, as someone who has read the Act, what are its biggest dangers?

This is what is called infantilisation.

Are millions of Indians giving up their jobs, their liberty, looking after their children, getting locked up, missing college, getting beaten black and blue for nothing?

If we are really such a bunch of ignorant fools, why is the government so worried?

Why are you deploying so many police officers and having fake missed call campaigns if you think we are ignorant?

Coming to the question of whether we have read it, the CAA is not some 80 page Act. It's not a complicated piece of legislation.

Quite simply, it says that people from Afghanistan, Pakistan, Bangladesh who have been living in India before December 31, 2014, and are either Hindus, Buddhists, Jains, Paris, Christians or Sikhs shall no longer be called illegal immigrants, thereby expediting their process for citizenship.

This is all it is.

You don't have to be a law student or a genius lawyer to understand this.

What we we're asking is quite simple: Where is the data?

For any law to be valid, there should first be a question of necessity. Where did you get the data that these six religious minorities from these three countries are in India and need help?

What was the rationale behind the choice of these three countries?

Why did you pick only these six religions?

Why did you leave the atheists out? Atheists are being persecuted in all countries for saying they don't have religion; that is also religious persecution.

LGBT persons are being persecuted in all of these countries, why leave them out?

Why was Sri Lanka excluded when there are Hindus from Sri Lanka who have been staying in India for years?

The other big problem with the CAA is that it does not say you are entitled to this exemption only if you are religiously persecuted.

Now anyone from Afghanistan who is not a Muslim, who could have come to India to have a better life, is entitled to protection.

But an Ahmadiyya, who fled from Pakistan because he is being religiously persecuted, is not entitled to protection.

Is this or is this not CAA? You tell us.

I have read the CAA and I'm ready to take on a challenge from anyone.