'The media hype that the Gir lion species is in danger is totally wrong.' 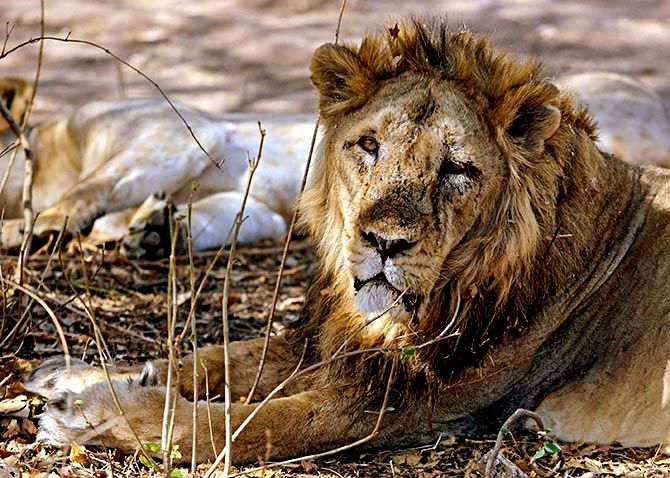 Twenty-three Asiatic lions have died in the Gir forests in recent days, setting off alarm bells in conservation circles about the fate of the only habitat for the species in the world.

Of the 23, at least 12 were killed by a combination of protozoal infection and Canine Distemper Virus, a contagious viral disease that affects a wide variety of animal species, including dogs, coyotes, foxes, pandas and wolves. It attacks the respiratory, gastrointestinal and nervous systems of animals.

PTI reports that the virus is known to have wiped out 30 per cent of the total population of lions in the Serengeti forest areas in East Africa.

The National Institute of Virology, Pune, has confirmed the presence of CDV is at least four dead lions.

The virus, whose vector is the tick, is known to affect the immune system, making the host body vulnerable to infection.

Stung by the crisis and the fact that the court's glare had fallen on the death of lions, the Gujarat government announced several measures to prevent the spread of the virus, including importing vaccines from Atlanta in the USA.

At the moment 36 lions are under observation in various care centres across the state; incidentally, three of the 12 lions died in care centres.

The latest deaths of the king of the forest comes on the heels of the state government informing the Gujarat assembly in March that 184 lions had died in 2016 and 2017, of which 32 died of 'unnatural' causes.

Even as he is involved in managing the crisis at Gir, the chief conservator of forests, Junagadh Wildlife Circle, D T Vasavada, in whose jurisdiction the lion sanctuary falls, took time off to speak to Rediff.com's A Ganesh Nadar about the latest crisis befalling the Asiatic lion.

How serious is this outbreak?

The entire Gir forest area is not infected. This is a localised problem confined to 25 square kilometres.

What steps are you taking to prevent this outbreak?

We have rescued 33 lions from this area and we have placed them under observation. They are in the rescue and care centres.

As they are in isolation the virus cannot spread.

Are you planning to vaccinate all the Gir lions?

Are you suggesting that all the 600 lions are infected?

I just told you that it is a localised disease.

The vaccine has been imported as a preventive step. We are observing the lions and will take a decision about using the vaccine.

How do you spot sick lions in the jungle?

We have teams in every sector of the forest. They are trained people and know how to track a lion.

To locate 600 lions, then capture, sedate and vaccinate them, seems to be a gigantic task.

We have not yet decided how many lions we are vaccinating. As you say, it's a huge task.

We are capable of doing whatever is required to save the lions.

Let me reiterate that it is a localised problem and the media hype that the Gir lion species is in danger is totally wrong.