'He has got all the criteria that are good for running an NGO.'
'He is always doing charitable things.'
'To be a political leader you must have cunning to go for the seal.' 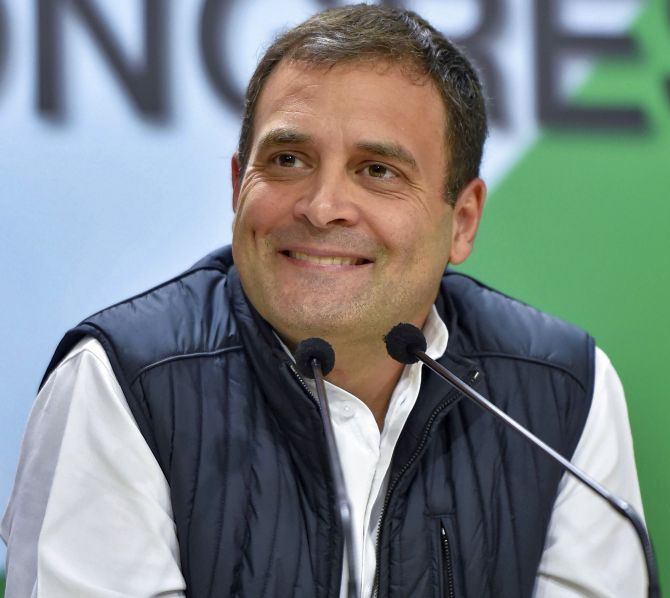 With the unexpected victories in Chhattisgarh, Madhya Pradesh and Rajasthan, can Rahul Gandhi repeat his 2018 triumph in 2019?

"Ever since he took over as Congress president, he is actually consistent and credible. These two things were missing in his narrative," senior journalist Priya Sahgal, author of The Contenders, which profiles 16 emerging political leaders including Rahul, tells Rediff.com's Hemant Waje.

How did you select these names for your book? What was the criterion?

Most of these guys are regional leaders.

The book captured the transition period in politics as we are seeing a generation change taking place.

This is going to be Akhilesh Yadav's first (Lok Sabha) election as president of the (Samajwadi) party.

He is now really coming into his own.

The party is his. He has now total command over the party.

Even Rahul Gandhi has taken over (the reins of the Congress) party.

The Badals have also come up (with GenNxt leaders).

Parkash Singh Badal has stepped back and Sukhbir and Harsimrat Badal are in charge. So are (M K) Stalin and Kanimozhi.

So, I am seeing a transition taking place in this period.

All these people are up against one man: Prime Minister Narendra Modi.

You exclude BJP chief Amit (Anilchandra) Shah from your book saying he has reached his destination. Don't you think he can replace Modi some day?

This thought did cross my mind and I know this is what Amit Shah also wants.

But really Amit Shah derives his past from Modi.

Without Modi, there is no Amit Shah.

As long as Modi is there in power, Amit Shah will also be Number 2.

We have been told he wants to come in as home minister in the next government if the BJP comes to power.

We will still see him exercising control, but he is the satellite. The sun is really Modi over here.

So in the sense, I thought he will always be Modi's Number 2.

Secondly, he has achieved his mettle.

We have seen what he can do.

What Amit Shah stands for is known, while all the others are still works in progress.

That is why I included Rahul and not Amit Shah. Of 16 profiles, 12 are dynasts in your book. Does an outsider have any chance in Indian politics?

We say the BJP is not dynasts. That's true because they didn't have a charge (of any government for so long).

The Congress has governed for the better part of 70 years. So they had a chance to promote first or second rung of leaders.

Now, if you see the BJP, in the 10 years of power, they already have Shivraj Singh Chouhan whose son contested (elections), Rajnath Singh has a son (who also contested elections).

You look at each state, you have daughters or sons of BJP leaders (who are in electoral politics).

They haven't yet to come into prominence because they had a shorter stint at power.

Dynasty is the way the country's runs. I'm quoting Rahul. But that is true.

Unfortunately, we want to see tried and tested names.

So either you are a (Aam Aadmi Party leader Arvind) Kejriwal who forms his own party. Otherwise very few people really have, unfortunately, stuck out on their own.

But apart from that, more and more people who have power, patronage and a family name are coming up.

In the book, you say you have profiled a future PM. Who is that person? When will s/he become PM?

I am not sure if it is Rahul as of now.

I say others like Akhilesh Yadav have a strong chance.

Tejashwi is the wild card one should look out for even as he just began his innings.

I see full of promises. Not prime ministerial, but lots of promise.

When or if (Rahul becomes PM), I think more than Rahul it depends on the (Congress) party. It's not his initiative.

If you ask them, then they say there is a short term plan, long term plan.

He has his luxury, but no leader would give him such a long rope.

Everyone, including your book, says Rahul Gandhi is a 'work-in-progress' politician. What does he needs to do now?

I have seen his transition.

Ever since he took over as Congress president, he is actually consistent and credible. These two things were missing in his narrative.

We don't doubt he has a good heart.

He has got all the criteria that are good for running an NGO.

He is always doing charitable things.

To be a political leader you must have cunning to go for the seal.

You have to take hard decisions.

Some of them may not be morally correct decisions, but some of them are practical ones as he showed in Karnataka where his party was not the single largest party. He did compromise on a lot of issues to make sure his party came to power.

That shows he is cunning, (in taking) political initiative.

This also showed some kind of leadership which people want to see on the ground from our politicians.

Because that always been his leadership model.

In his favour, ever since he took over as Congress president, he has been consistent.

We haven't seen him take, if I am not mistaken, any sabbatical.

He has been leading each campaign from the front.

Whether it is a state assembly election or in Parliament, he has shown leadership.

So if he keeps this up, then yes.

But he has his own back story.

Rahul's biggest problem is not outside, but within.

He has to make sure that all the stories about him like 'reluctant Rahul' or 'inconsistent Rahul' (need to stop). All this is his making, nobody else made it about him.

So, he has to overcome his own back stories to succeed.

That's the problem with him.

How is Rahul balancing the old guard and the new generation in the party?

I think he is having it better than earlier.

If you see (senior Congress leader from Rajasthan) Ashok Gehlot, he is someone who is always by his (Rahul's) side.

We thought it will be one of the either (Jyotiraditya) Scindia or Milind Deora or someone. But he hasn't taken any of them as his political adviser.

He doesn't have a political adviser like a Ahmed Patel sort of guy.

He is trying to balance out the old and new while also trying to find a new team.

So I find that the transition is happening in a somewhat logical manner.

The fact that he has not announced a (chief ministerial) face in either of the states going for the elections also shows a good balance.

Now he doesn't need to antagonise any camp. Let each one work, then figure it out.

So instead of creating more infighting or something, he is doing what he should do.

My problem with him is that he didn't allow a whole generation of leaders to develop.

Because Sachin Pilot, Jyotiraditya Scindia, they are there since 2004 or even earlier.

Because Rahul was reluctant and couldn't make up his mind, the Congress outside of its sphere did not promote any other leader.

So they just lost decades in Congress politics. Thanks to Rahul's own reluctance or decisions.

If Sachin Pilot or Milind Deora had been given MoS immediately after the Congress came to power in 2004, by 2009 in second term, they should have been made independent charges, the way Modi is doing.

Modi has grown a very strong second rung of leadership.

Modi has grown his team.

Rahul could have done the same (for others and for himself).

One, he was reluctant, so he didn't groom himself. He didn't allow the Congress to groom a second rung of leadership.

Two, because of his indecisions, we don't know what he stands for. What is the Rahul model?

I keep saying this we know there is a Modi model in Gujarat and how we judge him, good or bad.

We judge him by his constituency which has not done remarkable progress. It is not like Baramati (which is equal to) Sharad Pawar. So what is Rahul stands for?

Ram Madhav said we are in politics to win elections and not to do charity. But is that the only objective of politics?

Ram Madhav put it so well.

The idea is to win elections, otherwise why are you here in politics?

If you want to do good, there are other ways.

You want to help people, be an NGO, do charity, do social work.

You are into politics because you want to implement things, to do good.

But you first have to have power. Power is very essential.

Power is not poison. It can be used to do good.

Power is the means for good. That is the way our system works.

Otherwise, why do you have legislatures, elections? Why do we have people in power?

Do you think Rahul's temple run will gain him votes?

In Gujarat, Rahul didn't succeed, but he did make some dent.

Gujarat was the first change in the Congress that showed that Rahul does have something in him.

The first vote of confidence in Rahul came from the Gujarat (election), I would say. That also gave him some confidence.

He has also been speaking -- that he is now very keen to portrait himself as sort of Shivshakti.

He says the BJP's religion is very hard, masculine, toxic, 56-inch chest beating, while the Congress is more feminine, sympathetic or inclusive as opposed to the BJP.

This is what he wants to set up.

When he is portraying his religion card, he says ours is not a macho or angry Hanuman kind of religion, but ours is more softer.

Will the Opposition come together to tackle Modi?

I think a mahagathabandhan (grand alliance) is a post-election factor and not pre-election.

On the ground, they are fighting each other, competing with each other in most states.

In some states we can see, like (Telugu Desam Party chief Nara) Chandrababu Naidu and Rahul have come together for Telangana.

But the Andhra Congress is unhappy with this tie-up. So they are going to object to that for the Lok Sabha (election).

Unfortunately, Kejriwal and Rahul Gandhi are not getting together in Delhi and again Akhilesh, Mayawati didn't go with the Congress in state elections (in Chhattisgarh and Madhya Pradesh).

So right now, there are competing rivalries.

So I don't think the one is to one fight against Modi which (Rashtriya Lok Dal leader) Jayant Chaudhary or (Trinamool Congress chief) Mamata Banerjee talk about is going to happen.

It (the grand alliance) is going to be a post-election scenario.