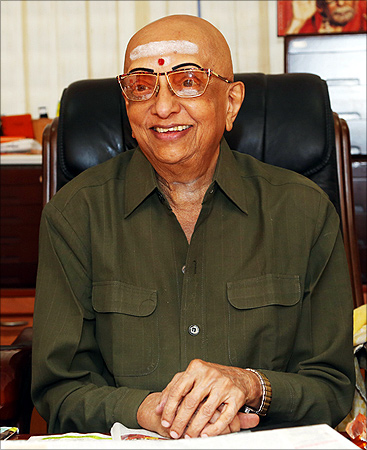 Cho Ramaswamy, editor of the Tamil political weekly Thuglaq, is the most admired political analyst in Tamil Nadu. In this exclusive interview to Shobha Warrier, he talks about the Sri Lankan Tamil issue, the Dravida Munnetra Kazhagam walking out of the United Progressive Alliance and also his thoughts on the next Lok Sabha elections.

When the DMK threatened to pull out of the UPA, many thought they were enacting one more drama. But they eventually did withdraw support. Did you expect them to come out of the UPA this time?

I am still not sure Karunanidhi is happy with the decision because as far as elections are concerned, he always takes even the smaller parties that get one or one and half percent votes. The Congress still is a party which could help him in the present circumstances -- the cases against the party, etc. Whether the Congress helps the DMK or not, the other parties are not going to do it.

And, he cannot go with the Bharatiya Janata Party because of his earlier stance and also his faith that he commands the Muslim votes. Whether he has it or not is another matter.

So, after sometime, the Congress may do something to placate him like coming out with a face saving formula where they may say something on Sri Lanka. After all, he has been projecting himself as the real votary of the Tamils wherever they are.

TESO (Tamil Elam Supporters Organisation) which he is flaunting now was given a decent burial years ago. Now, he has pulled it out of its samadhi, and it is the skeleton of TESO that is dancing now in the media. The public doesn't care. Nobody is taken in by his postures on Sri Lanka. When he was in power, he didn't do anything for them. When the war was going on, he didn't do anything. I don't call it a war; military action against the rebels. Now, he is asking for a post-mortem report.

The war in Sri Lanka ended in 2009. Why has the issue has become alive in Tamil Nadu all of a sudden?

Karunanidhi always thought he was the saviour of Tamils wherever they lived. Now that the platform has been stolen from him by J Jayalalithaa, he has been left in the lurch. She is doing all the fighting now and appears to be an Iron Lady as far as the Tamils are concerned. He now wants to compete with her and take back his glory.

Do you think the ordinary people of Tamil Nadu are really worried about what is going in Sri Lanka when they have so many other problems like power shortage, water shortage, etc?

I have always been saying this. The Sri Lankan Tamil issue has never been an electoral issue in Tamil Nadu. They have never voted on the issue. If people are so much worried about the situation over there, then Vaiko would not have got just 2 percent votes. Many other marginal parties that talk on this issue, have not been able to win a constituency on their own.

Of course, the Tamils here are concerned about them. They want Sri Lankan Tamils to live with honour, peace and dignity with equal status as the Sinhalese.

It is only the marginal groups that are creating the noise and the media is sensationalising it. It is made out as there is a huge public upsurge.

What about the protests started by the students?

How many students are demonstrating? If there are 3,000 students in a college, 150 are protesting. The others go home and enjoy the holidays. It is not that the entire student community is upset about it.

Newspaper reports say that young professionals have also joined students in the protests...

Tell me how many are protesting? Only very few.

There was an interview with Valautham Dayanidhi, former spokesperson for the LTTE in which he said that Sri Lankan Tamils feel that political parties in Tamil Nadu are using their names for political gains. Do you feel so?

Yes, the Sri Lankan Tamils know it fully well now. Even the Tamil National Alliance created by the Tigers have not made any big noise about the Sri Lankan President being declared a war criminal, about the use of the word genocide and all that. But some marginal groups in Tamil Nadu are doing it. Maybe they are funded by some overseas organisations; I don't know.

Will the noise made here create problems between the Sri Lankan Tamils and Sinhalese there?

Definitely, it will create bad blood between the Sinhalese and the Tamil population. This has not been helping them at all.

In fact, I would say the so called champions of the Tamils here were the cause for the total annihilation of the LTTE because they made the LTTE believe that India would intervene and prevent Sri Lanka from taking action.

The DMK wanted a resolution in Parliament against Sri Lanka. When the Pakistan parliament passed a resolution against the hanging of Afsal Guru, India condemned it saying it was an internal matter, and Pakistan had no right to interfere. Can India do the same against another country?

Yes, India objected to what Pakistan did and said, it was none of your business. The same way, it is not the business of Indian Parliament to pass a resolution against Sri Lanka. It will set a bad precedent which will affect us in Kashmir. Pakistan may demand in some forum that India must be made accountable about all the complaints against them on Kashmir; whether they are true or not is another matter. But there is grounds for noise making and Pakistan will make noise.

The Congress consulted the opposition parties about the resolution against Sri Lanka to please the DMK...

I don't think the Congress really wanted it. They did not want a resolution. That is why they spoke about consulting the others.

The problems Sri Lanka faced was aggravated by the training given by India to the LTTE and the other Tamil militant groups during Indira Gandhi's regime. They were trained, armed and funded by India.

Fortunately, Rajiv Gandhi saw things differently and wisely and brought about the accord with Sri Lanka. If the LTTE had cooperated and the Jaffna Tamils had cooperated, the situation would have been much better for them now. Under the accord, there was a kind of autonomy, there was an attempt to create a federal structure, there was an attempt to give equal status to Tamils along with the Sinhalese. All those were sabotaged by V Prabhakaran and the people here supported him.

We had been doing disservice to the cause of the Tamils there. We are continuing to do that.

It is said that India voting against Sri Lanka in the UN resolution made China closer to Sri Lanka. What kind of impact will it have on this region?

China will execute their contracts in Sri Lanka quicker now. They will be prepared to spend more money because they want to spread their range of influence.

Is India not responsible for such a situation?

As far as the central government is concerned, it didn't have the moral conviction of standing up to the strident voices of Tamil Nadu which are only marginal. It is not the opinion of the Tamil people here.

Is it coalition politics that is responsible for the situation?

I don't think so. The central government has always been like that. They lack the moral courage to take a determined stance and tell the Tamil marginal parties when and where to stop.

Let these parties come together and form an alliance and face the constituency and get defeated and probably lose their deposit. The Centre should have stood up to them.

India now has bad relations with all its neighbours and does not have a single friendly neighbour around. Is there something wrong with the foreign policy of the country?

I don't think it is the fault of India that Pakistan and Bangladesh are not friendly with it. As far as Sri Lanka is concerned, India erred. India should have been more helpful to Sri Lanka.

Now that the DMK has come out of the UPA, do you foresee immediate general elections?

I feel somehow the government will go and manage the numbers. There will not be any immediate elections.

Do you think the DMK will fight the next Lok Sabha elections alone?

I think both the Congress and the DMK will try to woo Vijayakant's Desiya Murpokku Dravida Kazhagam. He may even go with the Congress in which case, there will be three fronts and that will help Jayalalithaa. If there is a Congress front, a DMK front and an AIADMK front, the AIADMK will gain.

Or, there may be some face saving formula and the DMK may go back to the Congress.

The entire media is talking about a Modi vs Rahul match in 2014 though Rahul Gandhi said he was not in the race. Do you see it happening?

I think Rahul Gandhi was serious when he said he was not in the race. I am taking his words at face value. He may not like to lead a weak government. He may want a strong Congress government which will give him confidence. That is why he says he doesn't want to be in the race. Anyway, it is going to be very difficult for the Congress.

Then, will it be Modi vs somebody else from the Congress?

It will be good for the BJP if they project Modi. Then, he will be the issue and he will win on that.

Like many say, will the Muslims in India vote against the BJP if it projects Modi as the PM?

If the Muslims in Gujarat are with Modi, it can happen all over India. Leave alone that, the BJP will perform well under Modi because of his performance in Gujarat. People are looking for an honest politician to lead the country and he fits the bill.

Do you think a third front will come to power?

Who is there in the Third Front? Other than Mulayam Singh, who else? Mayawati will be not be with him. Mamata Banarjee will not be with the Communists. It is going to be difficult. A third front is always an anomaly.

The Congress and the BJP together can be expected to get more than 276 seats. So, any such arrangement has to remain either with the Congress support or the BJP support if at all there is going to be such a front. Otherwise, there will be no government.  If the BJP or the Congress are in it or giving support from outside, how can you call it a third front?