'When the Congress attacked Modiji, Vasundharaji kept mum.'
'Why was she so tongue-tied?'
'Everybody knows why she kept quiet then.' 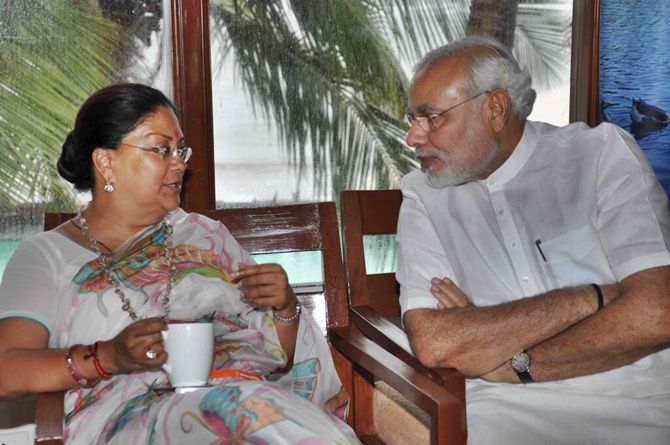 Just as Congress leaders in Rajasthan -- aligned with Chief Minister Ashok Gehlot -- releases recording after recording to prove their allegations of horse-trading and their claims that Sachin Pilot and his band of rebel MLAs were planning to topple the Gehlot government with the Bharatiya Janata Party's help, Hanuman Beniwal, the Rashtriya Loktantrik Party MP from Nagaur, who is a BJP ally, tweeted allegations against former BJP chief minister Vasundhara Raje.

"The whole world knows how she benefits. And you want to know it only from me," the maverick MP tells Prasanna D Zore/Rediff.com.

Your charges against Vasundhara Raje are serious. Do you have any evidence to prove your claims?

I have been consistent with my charges against Vasundhara. There is nothing new in these allegations.

I have been saying that she is hand in glove with Gehlot and working against her own party.

Do you have evidence to prove your charges?

Do you think I would be leveling such serious charges against her without any basis? Without any proof?

What proof do you have?

I have already named two lawmakers. One of them is Congress MLA Deepender Singh Shekhawat and the other is this Jat MLA from Sikar (Rajendra Pareek). They are my proof.

I have my sources and I will be revealing more in the days ahead.

Just wait for the BJP to come back to power.

Why was she so tongue-tied?

And now when the Congress government in Rajasthan is on the verge of falling, she is not helping the BJP do it.

Even Sachin Pilot had said the same thing earlier -- that Gehlot and Vasundharaji are helping each other. So, I have again tweeted that there is a nexus between the two.

You are an ally of the BJP and supporting the Modi government at the Centre and yet you are leveling serious charges against a senior BJP leader who has also been the chief minister of Rajasthan.

I am with Narendra Modiji and have been actively helping the BJP win in Rajasthan. The three MLAs belonging to the Rashtriya Loktantrik Party are still against the Ashok Gehlot government.

The whole world knows how she benefits. And you want to know it only from me.

We are asking you because you are the one who has raised these charges against her.

The whole world knows that Gehlot ka Vasundhara ka mila-juli ka khel hai (that Gehlot and Vasundhara are hand-in-glove with each other).

I will tell you about their nexus some other day. That time too will come.

Saare pol khol dunga (I will reveal all the secrets).

Right now, our target is to say goodbye to Ashok Gehlot's minority government from Rajasthan.

People are roaming without jobs in the streets, farmers are killing themselves faced with debt burdens and the Gehlot government has failed to help these people.

My three MLAs and I have been supporting Sachin Pilot since 2018 when this government came into existence.

If Pilot is going against Gehlot, then we will stand behind Pilot.