'Every family in UP has been deeply affected in this second wave.'
'It has only been denial, denial, and denial by the incumbent CM.' Meanwhile campaign strategies for aan alliance between Rashtriya Lok Dal leader Jayant Chaudhary and Akhilesh Yadav are being worked out with both leaders determined to make a united bid to oust the Ajay Mohan Bisht government in UP.

Talks are going on between your party and Samajwadi Party leaders. What are the key issues being looked at by both your parties?

Akhilesh and I have had wide ranging discussions.

As for the alliance, we are working out the details. It's a little early to say what our key campaign issues will be.

But the non- performance of the UP government is there before us -- the images of dead bodies floating in the Ganga, the fact that the CM keeps talking about how he is providing door to door facilities of testing and tracking for villagers to fight COVID-19, but nothing is happening on the ground.

Health care is going to be a major issue in the state elections next year.

We believe the GDP expenditure on health must be increased to 6 to 7 per cent of the central budget.

My own family has suffered because of Covid, so health remains at the top of my mind.

Unemployment, job losses, the diminishment of GDP from 2017 are other key issues.

What about the farmers issue? Will that become a rallying point for political parties?

The farmers have been sitting in protest for the last six months and the government continues to be unresponsive.

Many have come from far away districts such as Lakhimpur which is at the border of Nepal.

They have been sitting there through rain, cold and heat.

Sadly, things have reached an impasse. If we win the polls and form the government, our first priority will be to resolve their issues.

Are you forming a coalition of the kind formed by your grandfather, the late Chaudhary Charan Singh had done with Muslims, Jats and OBCs coming together under one banner?

Politics is dynamic and it will be foolish to think that times come back.

Politics mirrors society and society has changed in the last two to three decades.

Caste mobilisation is always a key factor in north India especially UP politics.

Getting the proper social alignment is important but so is maintaining social harmony.

We don't want to see Dalit-upper class conflict, nor do we want to see any further marginalisation of Muslims.

The BJP is a past master at social engineering. Given this paradigm and the fact that the present CM has been giving a huge push to the Thakur community, how are you going to counter this?

In my party, we do not believe in having caste-based organisations.

When they belong to a certain community, these members do possess a certain hold over voters in their own region.

As an alliance, we will sit down and look at the winnability issues and also on the need to create a balance.

Your party has a strong presence in around 15 districts of Western UP, but how do you hope to increase your party's presence in the rest of UP?

Every party has its own strategic plan in place, but today the key issue is to provide an alternative to the BJP.

That is why we are tying up with the SP because the SP has a pan UP presence and enjoys a certain credibility.

IMAGE: Family members of a COVID-19 victim outside a hospital in April 25, 2021. Photograph: Arun Sharma/PTI Photo

What about Chandrashekhar Ravaan of the Bhim Party? He has issued a statement saying that he would like to be a part of your alliance.

I have not had any conversations with him.

I have not met him. I did read the statement but when we talk about an alliance, there are a lot of issues to be sorted out.

What is the level of the organisation of your party, what does a leader of a party bring to the table.

What about the Congress? Will it be part of this alliance?

The Congress seems to be on a nose dive in UP.

Politics is dynamic. It does not stay still. Change is inevitable.

The Congress needs to embrace change and look at the future.

The Congress is a pan India party and has a presence throughout the country. Let us see what emerges in the days to come. 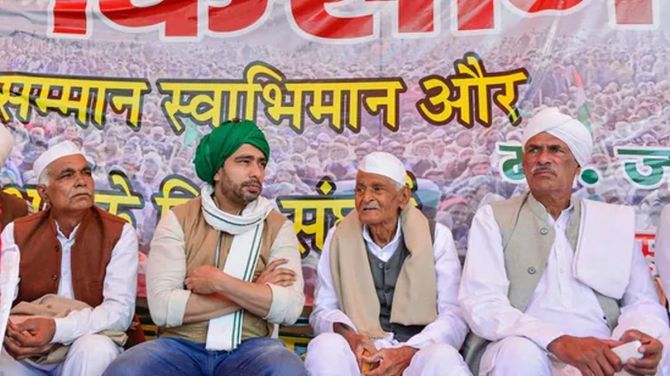 How much is Bharatiya Kisan Union leader Rakesh Tikait part of this conversation?

Rakesh Tikait is a leader of the Kisan Morcha which is an apolitical organisation.

The aims of the organisation are apolitical.

A few members of the morcha may have interest in politics, but if we are talking about the political alliance then he has no role to play in it.

We do have conversations with him, but that is on how we can support the farmers agitation.

Tikait has also been a political player.

He has contested elections on our party ticket earlier. Both our families go back a long way. There is a certain history there.

It will hurt the agitation if there is an outright politicisation of the leadership.

I agree that it is only through Vote ki Chot, once the BJP starts hurting politically, that there will be any change.

I don't see him engaging in direct political action.

In 2014, the BJP succeeded in winning the Jat vote and then went on to marginalise the community. Have the Jat leadership seen through the BJP gameplan?

I come from that community. The Jats realise the need to find ways to increase their political power and to build social alliances.

Will your alliance be talking to Mayawati?

The gathbandhan is not a new idea. We fought the last Lok Sabha election together.

Mayawatiji was part of that. But then she chose to quit.

I don't think there has been any engagement at the top level after that.

Several of her grassroot level workers have quit because of the haste she showed in quitting the alliance.

The BJP has a distinct Hindutva ideology. The other parties are followers of Nehruvian secularism that are finding it difficult to counter this ideology.

At a personal level, I am an Arya Samaji and I shun all forms of ritualism.

Public observance of religion is tricky. We swear an oath to uphold our Constitution.

I find it strange that we have a CM devoting so much time to puja.

Does his puja need to be telecast and sold as part of a political narrative? I find that imagery disturbing.

Don't make religion part of your pitch in politics.

The image of the UP police trying to beat you up when you went to express solidarity with the Hathras rape victim created shock waves.

I was in shock when it happened. I could not believe the police could stoop so low.

It does bring attention to many disturbing questions about what kind of sensitivity training we are giving to our police personnel.

Following this incident, we held a panchayat in Muzzafarnagar and other panchayats also where there was a huge outpouring of support for me.

I would have wished that the CM had reached out and taken disciplinary action against those cops.

Nothing of that sort happened. These days, I understand, people are rewarded if they do encounters.

In some sense this was an encounter between different political sanskars and proprietary.

The BJP has a well oiled election machinery and they have huge funds at their disposal which other political parties find difficult to match. How are you going to match this?

The current dispensation has a lot of resources. This is a little disturbing as it appears to be a misappropriation of funds.

But we have to battle on and the only way we can do so is to have a grassroot connection.

We are training our people on aspects of social media. How do you stop their fake news factory, how to reply to their trolls.

Our workers must be able to combat their social networks. The present UP leadership had come up with love jihad and anti-Romeo squads. What impact have these had?

These have all been diversionary tactics to camouflage their non performance.

To some extent people are seeing through it. They lost the Kairana election.

Prime Minister Modi and the UP CM are party mascots for the BJP. Combatting them will be an uphill task for your gathbandhan.

Every family in UP has been deeply affected in this second wave.

I don't think they (UP voters) will ever forget this trauma even those who had earlier voted for the BJP.

I don't know how many NOCs had to be signed by people in order to get a life saving drug.

It has only been denial, denial, and denial by the incumbent CM.

The PM has been absent for the last four months.

Now that cases are going down, he will emerge and then claim a great victory.

But for those lakhs who have lost family members, this is not going to be so easy to forget.

And finally, let me add that the rate of vaccination in UP is dismal. They are not able to provide vaccines in rural areas. The Covid ap is a complete disaster.

In village centres, a little over five lakh people have registered for vaccinations in a state with a population of over 22 crores.

We need to know how they are going to vaccinate these 22 crores (220 million) before the end of this year. 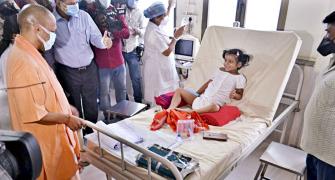