'Charles Correa was inspirational and visionary' 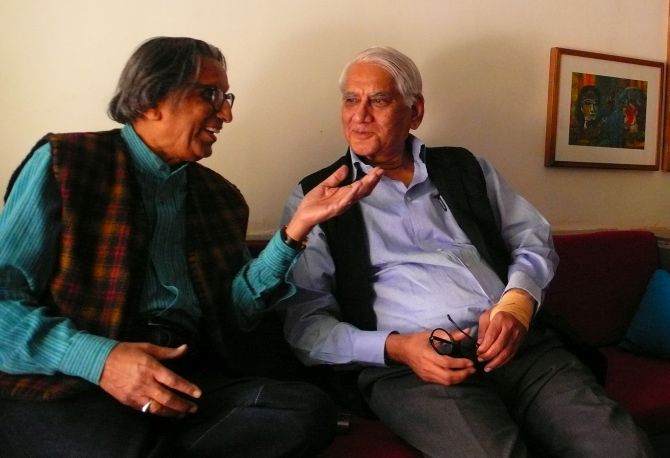 Balkrishna Vithaldas Doshi is one of India’s internationally-renowned architects. A fellow of the Indian Institute of Architects and of the Royal Institute of British Architects, Doshi worked with Le Corbusier for four years, soon after India’s independence, and has since then charted his own course, focusing and stressing on regional influences on architecture.

Now based in Ahmedabad, where he is a partner with Vastu Shilpa Consultants, the 88-year-old architect was inconsolable at Charles Correa’s demise. The two go back a long way, their friendship extending over six decades.

Doshi spoke to Syed Firdaus Ashraf/Rediff.com about the influence of Charles Correa on town planning.

How would you look back on architect Charles Correa’s legacy?

The other thing is that he played a significant role in the making of Navi Mumbai (Mumbai’s satellite city). And his contribution to the profession (of architecture) is immense.

Personally, what did Charles Correa mean to you?

He was a very inspirational and visionary person, and a very close friend of mine. I would first say, I have lost a very dear friend and a family member.

If I have to remember him I will remember all the 60 years of my association with him. In the six decades we have met as friends, colleagues, professionals, architects, family friends. We have enjoyed our life together in exploring whatever we are doing in our life.

Is there anything among his qualities that you carry with you as an architect?

I think vision and excitement.

What are the similarities and differences in both of your styles of work?

We were different but we were together in our ideologies, trying to find an identity for each other. The expression of two artists will always be different, no.

It cannot be easy to be an urban architect in a city like Mumbai; how could Charles Correa, or you for that matter, deal with the many issues that come up with officialdom?

That is the reason why things are not moving in Mumbai in the right direction. Before City and Industrial Development Corporation (CIDCO, which set up Navi Mumbai as a satellite city outside Mumbai) came into being there was a team of three people who began to conceive of New Mumbai. Those people were consulted by the government but now nobody consults those architects who were concerned with the project. The result (of this omission), you know.

Now, I don’t think there is any professional consultation of the kind of value that we are talking about.

Do you think smart cities are the way to go?

I would say, rather, an ideally liveable city is the solution and not only smart cities.

What must budding urban architecture students take away from Correa’s life and times?

To accept challenges, and to find the appropriate solutions.

Did Charles Correa ever speak to you about the chaotic and unplanned growth of Mumbai city?

He was naturally very unhappy with the way Mumbai was growing.

Did he blame anyone for the haphazard, vision-less growth of the city?

When you are unhappy, one needs to talk of vision. If people don’t have vision, what do you do?

You can talk of vision only when you have vision, but if you have no vision then? Development is not a vision.

So what do you think worked for Navi Mumbai?

Charles was involved in setting up the whole area of Navi Mumbai. He was also an advisor to CIDCO for a long time.

‘He articulated issues that were relevant to India’

How would you sum up Charles Correa’s legacy?

Oh my gosh, it is so difficult for me to answer. As a family member, I cannot answer this. It is better you ask another architect this. He was a mentor, someone whom I looked to for inspiration.

You have been part of the Charles Correa Foundation’s executive committee.

I have only been involved with the foundation for the last one year as I have been teaching abroad. I hope I will now keep his legacy going.

How could Charles Correa, or you for that matter, deal with the many issues that come up in dealing with officialdom?

He tried very hard. I think in the later part of his life he was very upset with what was happening to Mumbai city. He had a very clear vision about what a city should be.

The whole idea of Navi Mumbai was to not allow what has happened to Mumbai. He tried very hard, he was an activist. He tried to convince people at all levels. He was a very good communicator so he managed to communicate his ideas at many, many different levels.

But obviously, you know the real estate bar in Mumbai and I think greed has given us a terrible city. Greed and the lack of political will have destroyed Mumbai city.

Did he ever speak to you about the lack of vision on the part of our political class to change Mumbai city?

He said they suffered from acute myopia.

What was his best quality as an architect?

His legacy is he managed to create wonderful masterpieces and very difficult programmes but by using the culture of the place, climate of the place and materials of the place. He was very sensitive to locality and to locale and to the culture of India more broadly but also where he was building.

What among his qualities do you carry with you as an architect?

What inspires me the most about him is the ability to work across scales and the ability to engage simultaneously at many different kinds of problems which all balance in some way.

What must budding urban architecture students take away from Correa’s life and times?

They are inspired because he articulated issues that were relevant to India. That will be his legacy. He could talk, walk, what he wrote about, what he discussed and actually demonstrate through his buildings.