'In Kerala, if the Left had worked on stopping fascism, the BJP would not have become a force today.' E C Ayisha's prowess as an orator is well known in northern Kerala.

One of the prominent woman faces of the Muslim community in the state, Ayisha has been involved in political and social activities since she was 12 years old.

The 53-year-old Jamaat-e-Islami member is contesting the 2016 assembly election on a Welfare Party ticket from Malappuram.

You were part of the Jamaat-e-Islami, a socially conservative political movement which started in Malappuram way back in 1948. How did you become a part of such a movement?

My family was associated with the movement.

My father was first with the Communist party, but later started working with the Jamaat-e-Islami. He was so progressive that he wanted to educate me -- a girl -- and make me an active social worker.

When Muslim families were not educating their daughters, my father sent me to college.

When Muslim women did not participate in public functions, I became the unit president of the movement aged 12.

That was the beginning of my public life. My father used to prepare my speeches and help me speak them properly.

When I entered public life, the fight between religions was not that grave; there was harmony in society; between people belonging to different religions. 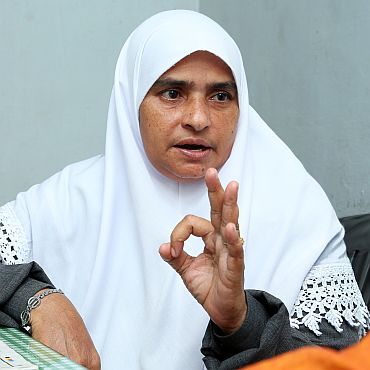 'When Narendra Modi came to power, we expected him and the BJP to provide good governance. Now we know that we cannot expect that. They have made people of the country so communal that there is now a kind of suspicion in the minds of ordinary people as well.'

Growing up, we lived in perfect harmony. What you see today, the skirmishes between religions, is nothing but political. People are being divided on the basis of religion to capture power.

Like many people, do you attribute this to the Bharatiya Janata Party coming to power at the Centre?

Definitely! Problems had started before, but it aggravated with the BJP coming to power at the Centre.

It was because of the soft approach to Hinduism that the BJP became strong.

In Kerala, if the Left had worked on stopping fascism, the BJP would not have become a force today.

Are you saying that the BJP is a fascist communal party?

What do you call those who murder people for eating beef, but fascists?

Look at what women are subjected to in a state like Uttar Pradesh! Who are the people behind such atrocities against women?

When such fascist elements get power, they think they can do anything in this country.

As a Muslim, do you feel insecure?

There is definitely a kind of uncertainty in the minds of minorities.

See what these BJP leaders, including some MPs, say when there is a problem somewhere? That you go to Pakistan. Is this the way to react?

Remember how they stuffed food into the mouth of a Muslim during Ramzan?

When something like this happens in other parts of India to a person belonging to your community, it is but natural that we also feel restless.

We feel no importance is given to the Constitution today. Only the Sangh Parivar's agenda is given importance.

Do you feel a Muslim need not say 'Bharat Mata Ki Jai'?

The slogan is just a tool to politicise the issue and divide people.

This is a secular country and the Constitution gives us the freedom to live following the beliefs of every person.

Are you not part of a conservative organisation like the Jamaat-e-Islami?

For the last five years, I am with the Welfare Party. It was the Jamaat-e-Islami that took active interest in starting the Welfare Party which has distinguished people from various political organisations who joined us because they were frustrated with other political establishments.

I do not know whether you know, but the Jamaat-e-Islami has always worked towards the uplift of women. Otherwise, how do you think I worked with it for so many years?

Where do you think I would have got the strength to be so active in public life if it was so conservative?

Five years ago, the Jamaat-e-Islami organised a women's conference in Kerala and over a lakh (100,000) women attended the conference.

I would say that not a single political party gives due recognition to women. They do not let women come up in politics.

The Congress claims the party encourages women to grow in the party. How many women barring Indira Gandhi occupied the top position in the party? She became prime minister only because her father was Jawaharlal Nehru!

Sonia Gandhi is the party president only because she is the daughter-in-law of the Nehru family.

Are there no able women in the party now? Not a single political party in India allows women to come up in politics.

Women are oppressed and suppressed in politics.

On the other hand, our Welfare Party has the policy to have 50 per cent of candidates as women. Unfortunately, we could not find that many eligible women.

Do you believe the Congress used Muslims as a vote bank?

Yes, they look at Muslims as a vote bank. They make promises to Muslims because they want to retain power, but they have not fulfilled the promises.

Still we want the Congress to be there because it is a secular political party. We want it to come back strong, as only it can create a balance and stop the fascist forces.

When Narendra Modi came to power, we expected him and the BJP to provide good governance. Now we know that we cannot expect that.

They have made people of the country so communal that there is now a kind of suspicion in the minds of ordinary people as well.

The BJP is becoming strong in Kerala...

When small parties like ours come up they say we will let fascist forces grow, but what are they doing to stop such forces?