'India is a huge market for Chinese goods. I don't think a war stands to logic when you have economic compulsions, but then Chinese are known to do illogical things.' 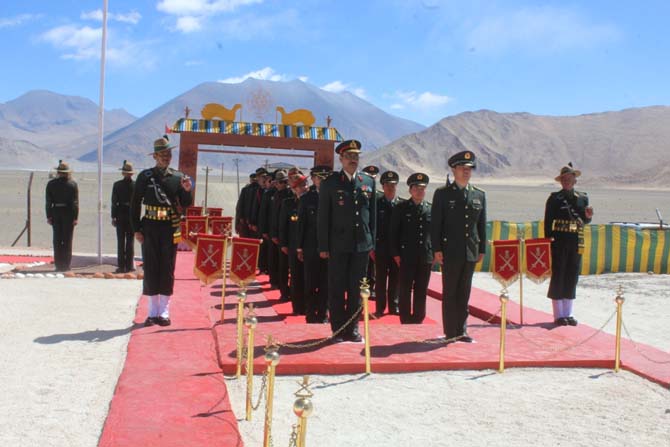 What is China up to? Does it really want a war with India? Can China ignore the huge Indian market for Chinese products? Is it just tough Chinese posturing?

Colonel R Hariharan (retd), a retired Military Intelligence specialist on South Asia who had served with the Indian Peace Keeping Force in Sri Lanka as head of intelligence, discusses with Rediff.com's Shobha Warrier what the standoff between India and China in the Doklam plateau means.

Is China playing a game right now? If so, what kind of game are they playing?

There are three ways to look at what is happening. One is from the perspective of the international environment.

The second is the bilateral relationship between India and China and the third angle is the changing strategic equation in South Asia.

Internationally, after Ukraine was partitioned, there is a growing sentiment in NATO against Russia supported by the US.

(US President Donald J) Trump has used this issue to suit his political agenda. There is a possibility of this confrontation going out of control and in such a scenario, Moscow needs Beijing as an ally.

China is a powerful entity, more powerful than ever before. It is competing to be the number one in the world's economic power engine.

The Belt and Road Initiative linking China with Europe, through the old Silk Route, is a success from China's point of view.

The China Pakistan Economic Corridor is also an important linkage of the Belt and Road Initiative.

Even in the South China Sea, a confrontation has been going on and China is not letting it go.

China has taken a confrontationist posture against many countries. It did not accept the judgment of the International Court of Justice when its claims to the South China Sea was turned down.

So, it is in this background that we have to look at the overall assertion of Chinese power.

Why I am mentioning all this is we should not see the India-China standoff in Doklam -- which is not even a confrontation -- as an issue that would give rise to a war or not.

We will have to look at it from a larger perspective.

The other issue is the bilateral relations between China and India.

All three harp on nationalism or national identity as a rallying call for the country. Xi came to power saying he would make the Chinese dream of making China the centre of the universe a reality.

China has been under a severe inferiority complex after the opium war and it is trying to live down the image of the sick man of Asia.

We can say it has succeeded as progressively it has upgraded the life of the common man.

Xi has cleansed the system of corruption, nepotism and cronyism and after 2012, he has established himself as the strongest man after Mao Zedong and Deng Xiaoping as the man who controls the government, the army and the Communist party.

Is it the desire to control the world that has given China this confrontationist attitude?

No. It is to restore Chinese pride, you can say.

Japan has amended the constitution so that it can have an army for the first time after the second World War.

Japan can now manufacture and export arms and enter into an alliance with other countries.

In India, Modi also has a vision for India with development as the key.

So, you have these three powers within Asia trying to find space beyond their domain.

The global economy which was controlled by the US and the European Union, has shifted now to Asia.

Naturally, there will be conflict among the three Asian powers.

What does China want to show India by taking control of India's neighbours like Sri Lanka, Nepal, Pakistan, etc?

It wants to reduce India's influence among its neighbours.

You saw it in Sri Lanka even though the present government is close to India.

You saw it in Nepal.

You saw it in Bangladesh.

They have already established themselves in Pakistan.

Now they are trying to do it in Bhutan.

China is wielding its economic power. It is not a direct military confrontation, but a confrontation to increase its influence.

This is what is happening in Bhutan where the borders are not properly demarcated. They have areas which are claimed by both sides and the Doklam plateau is one such area.

The Chinese have enormous patience in dealing with foreign powers and they will do it when it suits them.

So, I do not expect this to end immediately.

Why is the Chinese media aggressively attacking India all of a sudden?

You must remember that it is a State controlled media.

I would say China has won the propaganda war because as a democracy, we only reproduce the Chinese claims and counter claims; we have not contradicted the stories.

Is this a very planned strategy by China?

Of course, it is. Because of their efforts, now we are so much concerned about whether there would be a war with China or not.

The question that I encounter all the time is whether a war would break out tomorrow.

Personally, I feel China has succeeded in creating such a hysteria in India though the Government of India has been trying to negate it.

The other day, the Government of India issued a statement that there was no additional build up along the border.

Whatever the Chinese are doing, they are building up their capability.

Are we falling into the trap they are digging?

That is not possible. We know what we are.

The issue is whether we can prolong the issue.

The Doklam area is a plateau over the valley. It is essential for China as they can occupy the dominant ground.

Now then they can reach the India-China-Bhutan tri-junction. This is the crux of the problem.

That is why (External Affairs Minister) Sushma Swaraj told Parliament that China is creeping into the tri-junction.

How dangerous will it be for India as the north east is connected to India through the corridor?

This tri-junction is very important for our strategic, security point of view because the closer the Chinese come, it would threaten our Siliguri corridor which is about 30 km from there.

It is the land link between north east India and the rest of the country.

But this is not the first time the Chinese are doing such things.

When Xi came here for the first time in September 2014, and while Modi and Xi were talking, Chinese troops entered Ladakh and came 1 and ½ kms inside.

So, at all critical points, China is trying to assert its superiority and there was some indirect pressure at the top to bring home the Chinese dispensation.

India allowing the Dalai Lama to visit Arunachal Pradesh was not well taken by them.

Do you think India is reacting the right way to Chinese aggression?

There is no right way and wrong way.

When there is confrontation at the border, it is handled in three ways.

India had signed a friendship agreement and a standard operating procedure during Manmohan Singh's time in case the troops enter into confrontation in the border areas to avoid any military conflict.

So, at the local level, it is settled between the Chinese troops and the Indian troops with restraint.

Next is at the diplomatic level.

Our national security advisor is in Beijing to attend a meeting. There, the issue will be raised.

It will be a loss of face for India to withdraw troops and China to stop them. So, we have to first defuse the tension.

Can India afford to take a tough stand against China?

We have not reached that point.

Internally, there is a political reshuffle taking place in China.

The Chinese Communist Party will decide Xi's fate. The next generation leaders will be picked up at the party congress in the autumn. In August, the top party leaders will meet at a resort (Beidaihe) near Beijing.

So, I don't expect any action be taken to upset such an important event by going on a full-scale war with India.

To have a war or not is in Chinese hands.

At the same time Xi also would like to increase his popularity when Chinese nationalism is on the rise.

And the Communist party wants to cash in on that.

But where they are occupying is not a good place to start a war; it is where India can surround them from three sides.

As a military man, my reading is that this kind of skirmishes will continue till September.

What about the Indian market for Chinese products?

China has a business of around $70 billion with India.

70% mobile phones in India are Chinese made. That is why there will be talks to ease the situation.

We heard from the Chinese side that this will not affect business. India is a huge market for Chinese goods and they know that.

So, the fact is, China would not like to have a huge confrontation with India.

Pakistan as an ally is a great asset for China. That is why it is important for India to retain friendships with Afghanistan and Iran.

I think India is acting very correctly as we do not want a war.

Do you think China would like a war with India?

I don't think so. India is a huge market for Chinese goods. I don't think it stands to logic when you have economic compulsions, but then Chinese are known to do illogical things.

India will also lose in a war as war is a very unproductive thing.

Do you think if the skirmishes continue, it will lead to a full-fledged war?

The Indian Army has fought three wars, but the Chinese army has not fought any war.

Yes, the Chinese army is modernised. I am not underestimating the Chinese, but it is an untested force whereas the Indian Army does military exercises in 34 countries.

China is a toddler in international navies, but they are compensating it by missile systems.

So, if there was a war, it would not be a Western style war.

Don't miss: More insights into the India-China standoff, below and alongside

IMAGE: A Border Personnel Meeting between the Indian and Chinese armies on the occasion of the 'Harvest Festival' in Chushul and Daulat Beg Oldi, Eastern Ladakh, April 14, 2016.