'The police had cautioned me that there could be some 'trouble' in Dhaka by the end of June.'
'Once brainwashed, these young people don't think twice about killing people, thinking such an act will pave the path for heaven.'

"It's time Sheikh Hasina accepts that the militants who attacked the Holey Artisan Bakery in Dhaka had connections with Islamic State," Anizzujaman, Professor Emeritus of Bengali at Dhaka University, tells Rediff.com's Indrani Roy over the telephone from Dhaka.

A resident of Gulshan, the area where the attack took place, Professor Anizzujaman, who has actively supported the cause of atheist bloggers in Bangladesh, received a death threat on his mobile in November after which the government provided him with a bodyguard.

Professor Anizzujaman, below, left, believes the Bangladesh government should not waste time debating if the terrorists had connections with IS and instead track down the terror trail without delay.

Gulshan is a high security area. Do you think an attack of this magnitude means there was a serious lapse on the administration's part?

I don't think so. It's impossible to prevent a massacre that people with evil plans unleash on innocent civilians.

Did you ever imagine that such carnage could take place around your home?

Ever since I received death threats for supporting the bloggers, the police generally keep me in the loop about any impending danger.

The police had cautioned me some time back that there could be some 'trouble' in Dhaka by the end of June. I could never imagine that the 'trouble' would be this big.

The Bangladesh government, its police, some intellectuals. journalists are of the view that IS does not exist there.

In my opinion, it's a very wrong way of looking at things. I think the militants who attacked the cafe had strong links with international terror modules and the sooner our government accepts that, the better.

Being in a state of denial won't help in this hour of crisis. We can't afford to lose more lives. 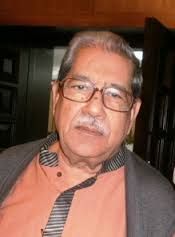 Why do you think the Bangladesh government is in a state of denial?

If the government admits the presence of IS here, it may have complicated international ramifications.

But we are living in a dangerous time and we cannot afford to look like ostriches in the sand. It's time we stood up against violence and terrorism. The onus is on our government to protect its citizens.

What should the Hasina government do now?

It should conduct massive combing operations across the nation. It should walk in tandem with the neighbouring countries to counter militancy. One just can't be lackadaisical.

Most of the terrorists who attacked the cafe reportedly belonged to wealthy families and attended prestigious educational institutions. What could be their motivation to take up arms?

Going by their background, the reason can't be only money, that's for sure.

I think the head hunters of the militant groups who recruit freshers into their teams are always on the lookout for young vulnerable souls who have a soft spot for religion.

Through various social networking sites, they approach these young men and slowly indoctrinate them into their sect, using religion as the tool.

Once thoroughly brainwashed, these young people don't think twice about killing people, thinking such an act will pave the path for heaven.

Of late, bloggers, publishers, priests in Bangladesh have been hacked to death, attacked and threatened. Do you think IS had a role to play in those incidents as well?

It's highly possible. Thanks to the tremendous technological progress, the world is almost like a small village now. And terror outfits are known for their well knit network.

Therefore, it's not at all difficult for Islamist groups of any country to establish links with notorious international modules.

Islamists of our country are killing bloggers, atheists, priests to pose a challenge to the secular forces.

Let me tell you, no force in the world can kill the spirit of humanity.

Do you still support the atheists and bloggers of Bangladesh? Now that there is a death threat, don't you feel scared?

(Pauses.) You live only once. Besides, I believe that every person has the right to live life kingsize. No religion is above humanity.

I will continue my support for secularism till my last breath.