'The ultimate satisfaction of helping in the country's space programme is the bigger achievement attracting women to space research -- and they are so good at it!' 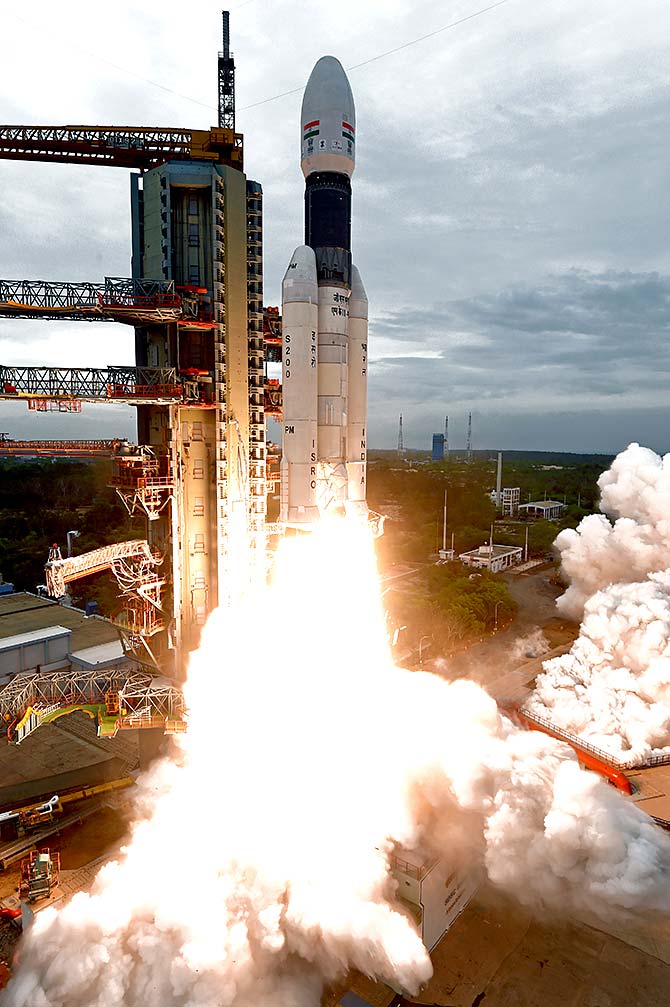 In the unputdownable Those Magnificent Women and their Flying Machines, Minnie Vaid tells the story of the many women scientists who have contributed to India's space missions.

"They were all remarkable women doing pathbreaking, crucial work with a remarkably calm demeanour that I envied -- 'nerves of steel' was the phrase they used as a necessary component of being a space scientist," Vaid, below, tells Rediff.com's Shobha Warrier.

You write in the prologue of your book, 'No woman has reached the top rank at ISRO since its inception on August 15, 1969. However, the last fifty years have seen an increasing number of women scientists and engineers take on leadership roles as project managers, project directors and programme directors.'
'They have carved their own space in a fiercely competitive, male-dominated world, managing homes and families through meticulous planning, efficient organisation and an unflappable temperament.'
Was this the trigger for the book?

The trigger was an invitation sent to me by the Indian Women Network of CII for a women empowerment summit, listing three names of the ISRO women scientists who worked on Mangalyaan.

Curiosity about Mars -- always a topic of interest and mystique -- and the role of these women in the mission prompted me to attend the conclave.

Ritu Karidhal, Minal Sampath and Moumita Datta talked about their experiences in launching the Mars Orbiter into the Martian orbit, in a record time frame, cost and execution.

This was a story that deserved to be told in greater detail so, after meeting the three scientists post lunch, I got started.

ISRO protocol is very rigorous and I had to wait about 3 or 4 months before I received the go ahead to meet not just the Mangalyaan women scientists but several more -- all doing path-breaking work most of the common Indian public had no idea of at all. 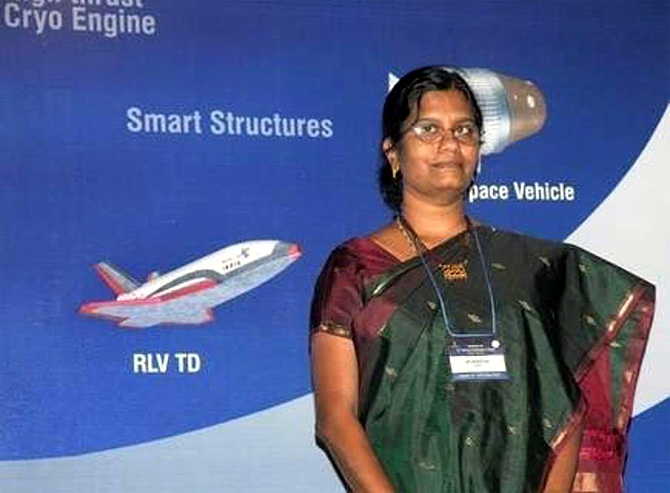 Did the fact that women were poorly represented in science some time ago, till maybe two or three decades ago, also play a part in writing the book?

This was something I discovered while researching and writing the book.

When I began, I did not know the extent of the poor representation of women, starting from low numbers in graduate, post-graduate, PhD, post-doc studies in science to women working in scientific organisations.

The even lower number of women scientists in high positions such as directors of centres or institutes is slowly being reversed with the appointment of ISRO's Ritu Karidhal as mission director and Vanitha Muthaya as project director for Chandrayaan 2, and J Manjula becoming the first woman director general of DRDO's electronics and communication systems.

Winds of change may blow slowly in the gender paradigm, but hopefully they will dispel the stereotyping and the unspoken biases. 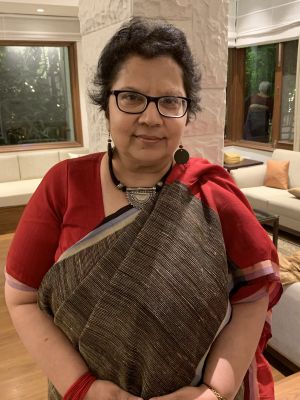 Today we get the impression that the offices of ISRO or DRDO have a large number of women scientists, much more than what you may find in the space research organisations of other countries like China, Russia and even the US. Is it true?

I don't think so. The numbers continue to be low not just in India but worldwide, including NASA in the US. The women scientists at ISRO, for instance, comprise less than 20 percent of the total technical/scientific work force, according to latest figures.

Also, as quoted in the book, 'Women make up only 28.8 per cent of those employed in scientific research and development across the world'.

There is a major dearth of women in leadership positions, as heads of scientific centres and organisations, research institutes or in higher decision-making committees.

This is less than the Asian average of 18.9 per cent and significantly lesser than the world average of 28.8 per cent in 2014.

Women engineers at NASA comprised a meagre 20 per cent of the total workforce while 15 per cent were part of planetary science missions.

Back home, approximately 12 per cent women are faculty members at premier scientific institutions, while an even lower 10 per cent occupy senior roles -- deans, heads of departments. 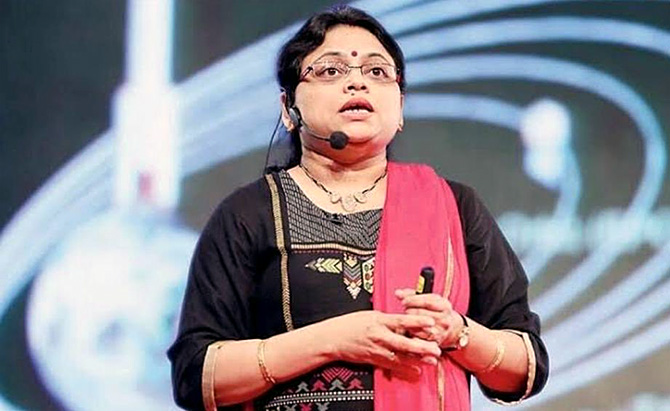 After writing the book, what do you think attracts women of India to space research? Is the feeling of achievement any different from what people in other areas of work experience?

One feature that I noticed in my interviews of the 21 women scientists working at ISRO was the feeling of pride that they had and articulated in doing work for the country.

It isn't something you come across while talking to women or men working in other areas, and was moving to hear.

I guess the ultimate satisfaction of helping in the country's space programme is the bigger achievement attracting women to space research -- and they are so good at it!

You wrote, 'Both male and female scientists interviewed for this book affirm that, all things being equal, a male candidate is often preferred over a female. Such biases, which position men as 'born leaders' set them on the path of career success while leaving women on the sidelines, or making choices that are seen to be easier.'
This is quite shocking. Did the women scientists talk to you about any kind of discrimination they face in their field?

I don't think this is shocking at all, it is the unspoken reality in this country -- perhaps in the world -- that while hiring female candidates the criteria may not always be sheer merit. Why else are women candidates always asked the marriage/family question?

However, in this book no woman scientist talked about discrimination faced due to gender; it may have crept in through various remarks about recruitment in the early years ('80s and '90s) or it may be reflected in unconscious comments made by the women scientists, you have to read between the lines in the entire book.

The 'preference for male candidates over female ones' comment was actually made on the record by male scientists in the book! The women were emphatic that under the scientific garb everyone was treated the same.

One of the scientists you interviewed said, 'Many times I wonder about all the attention that we women scientists are getting... my male colleagues who work equally hard also deserve it, right?'
Should we be separating scientists on gender, as male and female? After all, they are all scientists doing the same kind of work.

This remark has to be seen in context. I was asking the scientist whether enough appreciation or fame or popularity was being accorded to women scientists.

In my opinion, which I shared with the scientist, women scientists were not visible entities and for the amazing work they did and continue to do, they should actually be feted a lot more. Her response was to that particular comment.

It was a light-hearted remark saying that male colleagues also deserved the same attention as the Mangalyaan women were getting!

Each and every scientist -- as I have clarified earlier also -- mentioned that they do the same work and should be treated equally. 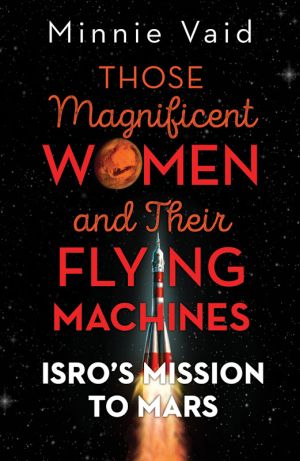 Ritu Karidhal, one of the women profiled and interviewed in your book, is the Mission Director for Chandrayaan 2. How do you describe her?

Ritu is a remarkably poised, confident and self-assured scientist. She was also patient in providing detailed and simplified explanations for scientific terms such as 'slingshot theory' and other space related manoeuvres so that a person like me who quit science in class 11, would be able to understand and convey processes to the readers in an equally simple and engaging manner.

She is also adept at the work-life balance that all working women aspire to, managing two young children and sharing responsibilities with her engineer husband on the home front.

How much did you enjoy talking to these scientists and also writing the book?

Meeting the scientists across various ISRO centres and spending time with them was a rare privilege as it isn't easy to get access to them otherwise.

They were all remarkable women doing pathbreaking, crucial work with a remarkably calm demeanour that I envied -- 'nerves of steel' was the phrase they used as a necessary component of being a space scientist.

I also found them warm and unassuming, often taken aback at the attention they were receiving and modest to the core.

This is what attracted my attention in the first place at that conference in 2016, the very matter of fact attitude displayed by all three scientists.

Writing a book comes with its own set of challenges, but it is something that is quite addictive -- no matter what the angst while writing, or editing, you always come back for more!