In his earlier interview to Rediff.com, retired India Navy Captain H Balakrishnan had blasted the bureaucracy for messing up the One Rank One Pension issue.

Captain Balakrishnan was one of the first defence officers to return his medals in 2008, along with Major General Satbir Singh in Bangalore, to the President in protest against the then government not implementing OROP.

Like many army veterans, the outspoken Captain Balakrishnan, below, left, is disillusioned with the Narendra Modi government for "not implementing OROP fully and gracefully, and without proper knowledge."

In this interview with Shobha Warrier/Rediff.com, the soldier expresses his disillusionment with the Raksha Mantri (Manohar Parrikar) and the Pradhan Mantri.

After spending Diwali with the soldiers, Prime Minister Modi said OROP was a Diwali gift to them, but the veterans agitating at Jantar Mandir said it was a black Diwali.

The PM also said the OROP had been solved, but some veterans are trying to burn their medals. Why such extreme views on this issue?

Let me quote Modi at Siachen on October 23, 2014 on Diwali eve. Addressing the troops at the Siachen base camp, he said, 'We stand shoulder to shoulder with the armed forces and it is my fate that I have fulfilled One Rank One Pension.' That was one year ago.

On November 7, 2015, a government notification for OROP has come without proper clarity. Nobody knows what they are going to get. What sort of a government is this?

On September 5, the defence minister flanked by the three service chiefs announced it. After two months, we don't yet know the details. They even made a mistake in the technical term.

It said details would be issued by the pension disbursing agency, which is the bank. How do they know what to work out?

I think what the government meant was the pension sanctioning authority, which is the principal controller of defence accounts. It shows even in terminology, this government cannot be accurate.

Ex-servicemen in the know feel that nothing is going to happen before the third week of January. If only they had listened to what the Indian Ex-Servicemen Movement headed by Major General Satbir Singh had been requesting and pleading all these months. It all leaves a feeling of revulsion.

What you said is a technical mistake. Has this government not implemented OROP?

How does that help? Like they say, the proof of the pudding lies in its eating. Where is the pudding? They said, they had accepted OROP. But out of the seven terms which the ex-servicemen movement put forth in a meeting with the defence minister post-his announcement at the September 5 press meet, four sticking points are still there.

The ex-servicemen wanted a five-man commission; one person appointed by the ministry of defence, one serving personnel from the armed forces, and three from the ex-servicemen's group. But they want a one-man judicial commission. We do not know who the judge will be and what the terms of references are.

My suspicion is that the bureaucrats are muddying the waters and the ministers are powerless to overcome the bureaucracy.

The armed forces have been asking for OROP from Prime Minister Indira Gandhi's time. Finally a government is implementing it. Why are the veterans not appreciative of the Modi government's efforts?

When you are prepared to accept and implement it, why can't you do it gracefully?

We have not asked for the moon. All that we are asking is make it a five-man commission and use 2014 as the base year and not 2013.

Then there is this stupid clause that says all those who retired will come under OROP, but all those who are going to retire prematurely in the future will not get OROP. You cannot have a more stupid proposition. You know what's going to happen now?

Like Lieutenant General Syed Ata Hasnain, who retired as the military secretary from Army Headquarters, wrote, this would lead to a bloated, disgruntled, unmotivated senior officer cadre in the army, which is 1 million strong. Does this not affect organisational efficiency?

People are not going to go out for want of OROP and naturally youngsters cannot come up. How are you going to manage the cadre? Like General Hasnain says, it is going to be chaotic.

Last year the prime minister said everybody knew that we had to keep the army young and there was no question of not giving OROP to those who retire premature...

Yes, we have a government where the left hand doesn't know what the right hand is doing. You go back to September 5. The announcement was unequivocal that those who retired voluntarily would not get OROP. Then came the hue and cry and at Faridabad, the PM said that voluntary retirement did not come under the question at all.

Look at what they say now -- that old retirees will get OROP, but not the new retirees. What does this mean? The ministry of defence, going against the words of the prime minister.

The government has tied itself in knots. That's why I said they should have shown a little bit of grace and broad mindedness in this. It would not have cost them anything.

The defence minister, the other day said, all the demands could not be fulfilled...

I will give you his timeline. In January 2015 at the India Today conclave, he said by middle March OROP would be given. It is November now.

He also said that the veterans were testing the government's patience...

As long as the veterans maintain the military bearing of stiff upper lip, stand ramrod straight, and say, yes sir, they are on the best of military behaviour. The moment they express dissent, it is indiscipline in the defence minister's lexicon. 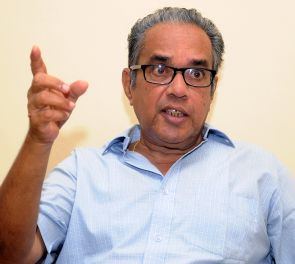 The public now feels that the veterans are being obstinate in their demands when the government is ready to implement OROP.

Where is the implementation? They should have come out by now with the tables and tell us that this is the notification we are giving you. You have only given a notification.

Without the tables, nobody knows what is going to come. They even made a mistake in the technicalities in the notification.

Did not the government, did not the IIT-Bombay graduate who is the defence minister, know the basics of how to round up things? Doesn't he know that when you issue a notification, it has to be complete in all respects? Was he not a chief minister earlier?

Where is OROP without the tables? We do not know what we are going to get.

There is a draft letter given to (the previous defence minister) A K Antony by the last army chief and the tables are all worked out in it. And it was accepted by Parrikar when Major General Satbir Singh and his team met him in January.

They told him that as far as the tables go, for each rank, they should take the maximum of the pay to avoid litigation.

All three had put in 32 years of service. Brigadier C will get a pension between A and B because they want to take the average of maximum and minimum, which the government has brought in.

OROP means same pension for same rank and same length of service, but if you take the average of the maximum and minimum, these three brigadiers with the same number of years as service will get three different pensions.

It is also said that OROP is going to be a huge financial burden on the government...

If we go by the maximum pay grade for each rank, there will only be 1.13 per cent more than what is calculated. Instead of Rs 8,000 crore, there will be another Rs 80 crores.

This is what (Congress MP) Captain Amarinder Singh asked in his letter, 'You offered Rs 125 lakh crore package for Bihar and Rs 80,000 crore package to J&K, can't you give just Rs 100 crore to the army veterans?'

So, the government talking about financial burden makes no sense. It is bakwas!

Over the period of time, the credibility of the defence minister and the ministry of defence has gone down tremendously.

Would you say the government didn't do its work properly?

They did it badly. It is going to land them in courts.

It will affect military morale. It may even lead to situations compromising national security. You must remember the symbiotic relationship the armed forces have. There are instances of father and grandfather standing at Jantar Mantar while the grandson is serving the army.

I would say the BJP better watch out for the Punjab assembly elections. That is when it is going to learn its lessons.

There are 5 lakh (500,000) ex-servicemen in Punjab. Then you have their families, extended families and friends. It is a small state.

The BJP has lost a loyal constituency. Let's face it; the army veterans were leaning towards the BJP than the Congress. They lost it because they have bungled OROP badly.

This Modi government is more talk than substance. We all expected Modi with the majority to tame the bureaucracy, but it is the bureaucracy that tamed him.

It is the government that is arrogant and adamant.