'This government is playing a very, very, dangerous game'

'Igniting in this country, a false feeding of nationalism combined with religion.'
'They are promoting the religion of the majority people in the country to feed their political agenda.'

"Why do you think the government and their spokespersons are targeting only Pakistan, day in and day out? They are targeting Pakistan because (that) raises religious passions in India," former finance minister Yashwant Sinha tells Rediff.com's Vaihayasi Pande Daniel and Prasanna D Zore.

What does the government fear from people-to-people contact in Kashmir?

The government is scared to allow us to talk to Kashmiris because it doesn't want the world to know the reality in Jammu and Kashmir.

Somebody wrote a piece in The New York Times, complimentary to the government, and it was promptly reported by the Indian media. Any adverse report in the Western media is being blacked out in the Indian media.

Given the current situation, it will take a fairly long time for normalcy to return to Jammu and Kashmir.

What are you going to protest against when Narendra Modi is just the catalyst? And your neighbour, your friend and your family are actually the people who believe what he has just highlighted.

People have been made to feel this way. It is not that they have independently come to this conclusion. They have been bombarded with propaganda and the Opposition is not able to match the scale and intensity of this propaganda.

It is on the messaging front that the Opposition is losing out and the present government is having a field day.

My advice to the Opposition has always been that, including at the joint Opposition rally addressed by (West Bengal Chief Minister) Mamata Banerjee before the (2019 Lok Sabha) election in Kolkata was to unite and fight the BJP and that they should not target individuals, especially the prime minister.

That they should raise issues. There were so many issues that they should have raised instead of getting into personal criticism. They should not even take the name of the prime minister or anyone else.

For that matter individuals should also not be named by their designations, but talk about issues. None of these suggestions were accepted. The Opposition parties fought the election separately, made the prime minister the target, which worked against them completely.

We have a very difficult situation in our hand. A very difficult battle. Therefore, it is very important that the main Opposition parties should put their heads together and work out a strategy.

People like me who are not in party politics are there to help. But we can help only up to a point. We tried to help even before the Lok Sabha election.

Who is the real voter for this dispensation? And why do you think they have re-elected this government?

The Indian voters re-elected this government because the Opposition parties could not get its message across to the voters. Also, the government and ruling party bombarded the people with a false sense of comfort.

The second is this government is playing a very, very, dangerous game and that is, igniting in this country, a false feeding of nationalism combined with religion. So, it is religious nationalism, which is being promoted by this government.

Therefore, they are promoting the religion of the majority people in the country to feed their political agenda.

Why do you think the government and their spokespersons are targeting only Pakistan, day in and day out? They are targeting Pakistan because (that) raises religious passions in India. 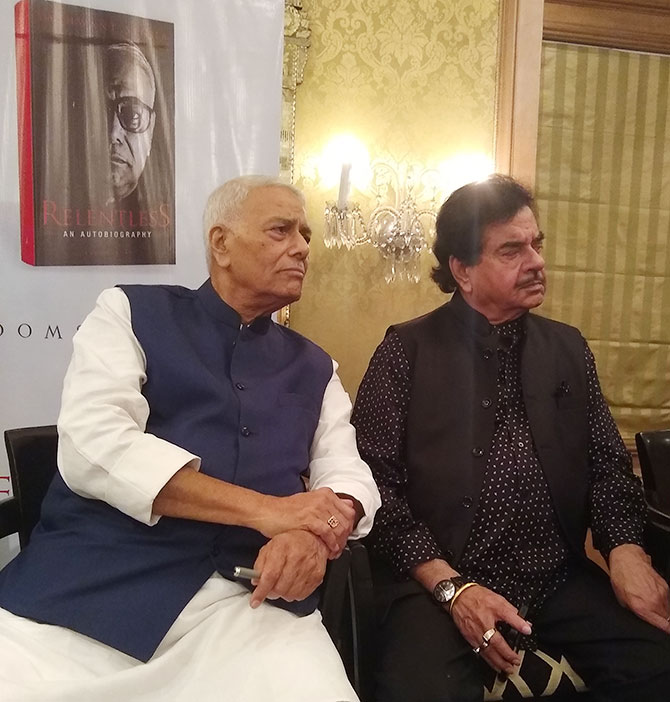 Unfortunately whatever I said then has already come true today. And that was the time when the government attacked me by saying I was looking for a job and I was disappointed because I didn't get a job (the finance ministry).

Their main attack against me began on social media. When they realised that I remained unfazed despite all the vulgar name-calling and propaganda against me, they asked the media to ignore me.

As for getting scared of the enforcement agencies, let me tell you that I have never done any wrong in my official career as a bureaucrat, or in my ministerial career. I left the ministry of finance 17 years ago.

There have been many government regimes whom I have criticised, and who may have tried to find something against me, but nobody has succeeded.

I am clean, my children are all clean and I know that for a fact and therefore, while I cannot rule out their vindictive actions, I don't fear anybody.

What do you think the judiciary must do or doesn't seem to be doing in this kind of situation?

The judiciary is the ultimate protector of our Constitution and the fundamental rights of the citizen. The judiciary has, therefore a very important role to play.

Having said that, I am often disappointed at the attitude of the judiciary. I feel that in giving primacy to the State and not to the fundamental rights of the citizens which are threatened, or have been taken away, the judiciary has been a silent spectator.

As a former finance minister, how would you rate this government's track record in handling the economy?

I have stated earlier also that demand has started contracting for some very good reasons.

The government has made a huge sacrifice by giving up revenue of Rs 1.45 lakh crore. This revenue loss will impact the fiscal deficit target.

This money could have been used instead on creating rural infrastructure, igniting demand in the rural areas, in the informal sector, in the MSME (micro, small and medium enterprises) sector. That could have triggered the virtuous cycle in the economy.

This bonanza to a select few corporate houses will not revive demand.